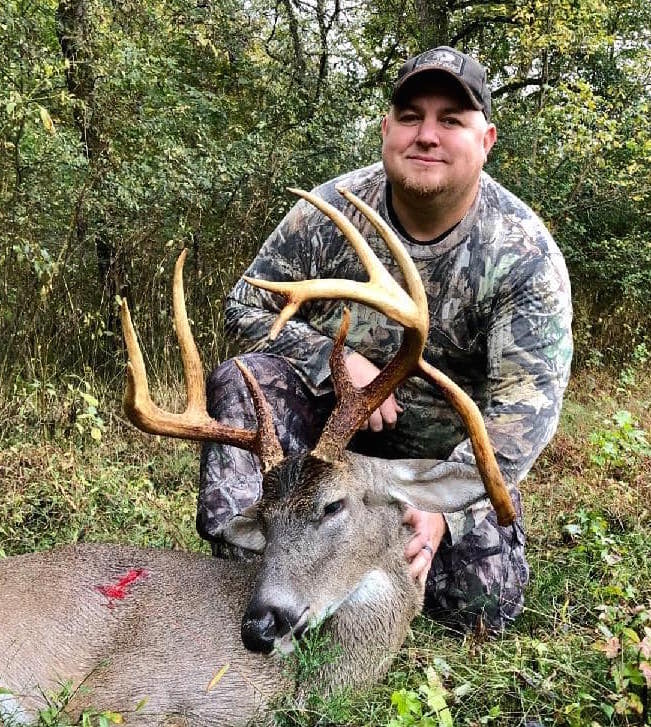 He wounded the 10-point buck during archery season

John Johnston of Spartanburg, S.C. rattled up a huge 10-point, drop-tine buck that’s been green-scored at 145 inches during a morning hunt on Oct. 26. The drop tine was 11 1/4 inches long.

It was not Johnston’s first encounter with the deer.

“My trail cameras captured photos of it before archery season. And then I shot him with my bow. Unfortunately, my shot was low. But luckily he survived. He pretty much disappeared after that. I tried moving around, moving cameras, and everything,” he said.

After hitting the deer low, Johnston said he thought he’d never get another chance to see the deer. But a week later, his trail cameras captured photos of the animal again.

“He showed back up twice. And then he disappeared. After that, I’d pretty much given up on him. I just didn’t think I’d see him again. Still, I had decided I wasn’t going to shoot anything else — just hoping he would reappear,” he said.

Over the next couple of weeks, Johnston’s cameras didn’t pick up anything he wanted to shoot. But he decided to go on the 26th. He got in the stand about 7:30 a.m., a little later than he’d planned. Johnston decided to try something he said he never does.

Rattling lured in the 10-point buck

“I decided to try rattling that morning, which I never do. I have the Illusion Systems grunt call and Black Rack. So I grunted six or seven times and rattled the horns for about five minutes. I set my horns down, and by the time I raised my head back up, I could see him down in the field,” he said.

The area he was hunting, which totals about 100 acres with a mixture of tree lines, small creeks, and open area, had not been cut in a while. So the undergrowth was fairly tall. The only part of the deer Johnston could see was the head. And the deer was staring straight at the hunter.

“He had already picked me out and was giving me the eyeball. Then he turned and walked off about 25 or 30 yards,” he said.

Then the 10-point buck made a fatal mistake.

“He stopped and looked back, and offered me a good shot. And luckily I was able to get him,” he said. “He ran about 40 yards to the tree line. I was watching him through my scope and he disappeared. I thought at first that I’d screwed it up again and missed.”

But once Johnston got out of his stand and walked to the tree line, he saw the deer lying dead not far from where he’d lost sight of it from the stand.

“The deer had a bad gash and an abscess from where I’d shot him with the bow earlier this year. I feel fortunate to have gotten another shot at it and glad I was able to get him that time,” he said.

Congratulations to Johnston, who is now entered in our Bag-A-Buck contest. This makes him eligible for a number of great prizes. That includes the grand prize, a two-day, two-man hunt at Cherokee Run Hunting Lodge. Click here to view the Bag-A-Buck gallery or to enter the contest yourself.

Hailey Holleman , 10-years-old of Statesville , NC located in Iredell County bags this impressive nine pointer on Dec. 29, 2020. Thanksgiving day was her first taste of hunting with her grandfather and was her […]

I am a retired professor from NC State University. I currently live in Wake Forest, NC. I often hunt with a group of retired faculty members from NC State and NCCU.  On Nov. 27, 2020, […]

About Brian Cope 1743 Articles
Brian Cope is the editor of CarolinaSportsman.com. He has won numerous awards for his writing, photography, and videography. He is a retired Air Force combat communications technician, and has a B.A. in English Literature from the University of South Carolina. You can reach him at brianc@sportsmannetwork.com.
Website