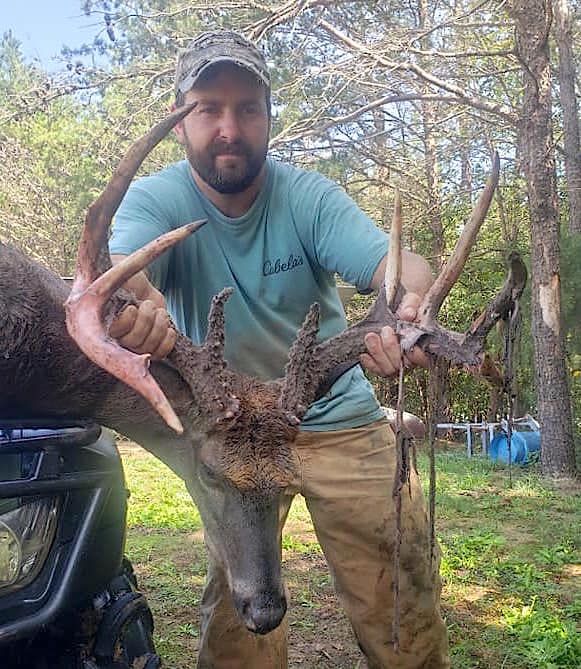 Richard Shumaker of Mebane, N.C. killed a huge 12-point buck in Caswell County on Sept. 12 while bowhunting from a lock-on stand. The buck had 10 scorable points, and has been green-scored in the 160-inch range. Shumaker had a pretty long history with the deer before finally killing it.

“I’ve let him walk for two years. He was a good deer last year, but I was targeting a bigger one then, and wanted to give this one another year. And he really grew up a lot since last season as far as mass goes. He really put it on,” said Shumaker.

He felt fortunate to see the deer on opening day, even though the buck was a regular visitor throughout the offseason.

“He was really difficult to pattern. Most deer, they’ll come to a stand either every evening or every morning. He showed up a lot on that stand, but he was not consistent at all. He might go three or four days without showing up at all. Then he’d come one morning, then the next evening, then the next afternoon. He just didn’t stick to a regular schedule at all,” he said.

The morning before opening day, Shumaker checked his trail camera. Pictures showed that the day before, the buck showed up that morning as well as that evening.

He shot the buck with a Mathews Halon bow

The afternoon of opening day, Shumaker saw a lot of activity from his stand, including numerous deer and turkeys. But his target buck wasn’t one of them. But he stayed patient, knowing the deer seemed to travel on such a loose schedule. And as afternoon turned to evening, he saw signs the buck was on its way.

“A small four or five-pointer came in and he was there feeding. And I noticed he got to looking behind him some, like he was getting nervous. A doe and fawn that I’d seen earlier had come back in. And they also kind of got a little nervous acting, and looking behind them,” he said.

The hunter followed their glances and saw another buck. He realized immediately it was a frequent traveling partner of his target deer.

“I went ahead and got ready, because I knew he was coming in with him. And sure enough, he came right in. He stopped for a few minutes, did a little eating, and finally turned broadside to me at about 24 yards,” he said.

He shot the buck with a Mathews Halon bow. The deer ran off a short distance into a pond, where Shumaker found it after a short search. He’s hoping to take the deer to the 2021 Dixie Deer Classic in Raleigh next March.

Congratulations to Shumaker, who is now entered in our Bag-A-Buck contest, making him eligible for a number of great prizes, including the grand prize which includes a 2-day, two-man hunt at Cherokee Run Hunting Lodge. Click here to view the Bag-A-Buck gallery or to enter the contest yourself.

About Brian Cope 1647 Articles
Brian Cope is the editor of CarolinaSportsman.com. He has won numerous awards for his writing, photography, and videography. He is a retired Air Force combat communications technician, and has a B.A. in English Literature from the University of South Carolina. You can reach him at brianc@sportsmannetwork.com.
Website