Late fall and winter is sight-fishing time for schooling Carolina redfish, but what do you do when the sun doesn’t shine and you have trouble spotting them? Here are one guide’s suggestions.

With water temperatures dropping rapidly, inshore anglers in the Carolinas looking to catch winter redfish expect them to group up on shallow flats where the sunshine and clear water often gives away their location.

But what about those days when the sun doesn’t shine? Does that mean it’s time to target something other than redfish or stay at the dock altogether?

Justin Carter, a fishing guide from Charleston, S.C., said there’s no need to give up on reds just because the weather won’t cooperate. Much of his success is going to be determined by factors other than clear, blue skies.

“The first thing to look at is the water temperature,” Carter said. “If it’s still in the 60s, then you’re going to have a more normal redfish feeding pattern. If the temperature is 60 or below, then you can expect the fish to be more sluggish.”

Carter does almost all of his winter redfishing back in the marsh, meaning estuaries, small creeks, sounds and back bays — the type of terrain that abounds on both sides of the Intracoastal Waterway in both Carolinas. This time of year, he’ll confine his fishing to water that’s 4 feet deep or less.

He said the majority of the bait will have left the shallows. And redfish will gang up more for safety from predatory dolphins. A lack of sunlight overhead and/or windy, rainy conditions tends to nullify the sight-fishing on which so many redfish anglers rely. To make up for that, he’ll look for other visual clues that a school of redfish is in the area.

“I keep an eye out for shore-wading birds like egrets and ibises,” Carter said. “Just one bird will get my attention, but two, three or four standing in the same vicinity means there are redfish around. I don’t know how those birds know; I guess the reds are pushing stuff to them, but it’s a good sign.”

Other visual clues may include water pushing or just a flicker or two from a shrimp or baitfish.

Under such conditions, Carter said there is a need to cover a lot of water until you locate the school of fish. His choice of baits are soft-plastic artificials since he can fish them faster than live baits. 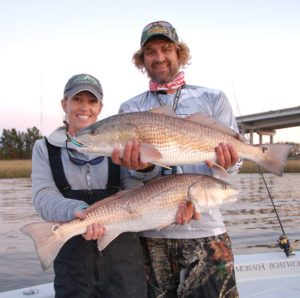 Carter is going to fish any moving tide where the water is up to but not all the way in the grass. He’s also going to work areas where he historically catches redfish: creek mouths, boat docks, depressions and ditches.

“I’m going to cast the bait right up in the edge of the water. I don’t want to make any kind of splash, because redfish get spooky in the winter, and the colder the winter is and longer it’s cold, the more spooky they get,” he said.

Steady on the retrieve

Carter said there’s no reason to do anything special with the retrieve. A slow, steady retrieve just off the bottom produces the best results. On occasion, he may hop the bait, but nothing flashy or erratic.

“If we’re fishing in overcast conditions, I want my bait colors to be a little flashier — maybe a gold or white bait with a chartreuse tail, something with contrast,” he said.

As the water gets colder after New Year’s Day, he will downsize his artificial baits from 5 inches to 4 to 3 and sometimes as small as 2½ inches. This downsizing coincides with the activity level of the redfish. The colder the water, the smaller the bait.

Carter also wants to make longer casts; he said redfish are more aware of their surroundings in the winter than any time of the year. They might tolerate boat wake and noise and other disturbances when the marshes are full of life and activity in the summer, but not in the winter.

If he has a choice of what kind of inclement weather he’d prefer to fish, Carter said it’s always going to be the beginning side of the front, when the rain and clouds first move in — rather than the back end as the weather is pushing out. 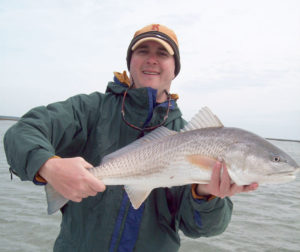 “A spike in the barometric pressure really affects these fish negatively because they live in such shallow water,” he said. “The back side of the front also usually means colder and windier weather is at hand.”

Since not all of his anglers are adept at casting artificial baits, he does have a few tricks up his sleeve for days when he uses live baits — mud minnows or shrimp if they are available. The first trick is the use of a slip cork. It bears mentioning this is not a popping cork nor is it a pegged cork, the same commonly used in freshwater fishing.

“I’ll use a slip cork and adjust the bobber stop so the bait suspends just off the bottom,” Carter said. “No popping, no noise; I just want to present the bait, right in the fish’s face as it floats by.”

Guide Justin Carter would rather spend his time on a rainy or overcast winter day casting artificial lures to redfish than sitting in one spot along the shoreline, soaking live bait while waiting for fish to come to him.

As such, there are a lot of artificial baits and bait combinations to choose from. His top pick is a Z-Man MinnowZ rigged on a Trout Eye jighead with a 2/0 hook. Because he expects redfish to be holding in shallow water — whether he can see them or not — he’s going for the lightest jighead available, 3/16-ounce.

Developed by Ralph Phillips a South Carolina-based trout-fishing guru, the Trout Eye jighead is ideal for inshore saltwater fishing. Gamefish key in on the eye of a baitfish, and a visible eye is a critical factor in their decision whether or not to strike.

This works on passive redfish

Carter also has a great tip for retrieving the bait when you suspect the lure is in the strike zone.

“The plastic used to make this paddletail is more buoyant than other plastics,” he said. “This means when I’m swimming the bait right along the bottom I can pause, causing the bait to glide to the bottom and, unlike other plastics that just sit on the bottom, this bait will float up, looking like a baitfish feeding unaware. That’s a great way to get a strike from a less-than-aggressive redfish.”

“This will work for all redfish in the marsh, not just the under-slot fish,” he said. “I can take this bait and this technique and catch every redfish from 12 to 30 inches.”

For a summer change, target the Carolinas’ bonnethead sharks, which don’t mind the heat as much as other inshore species. […]

What’s it like to be an N.C. game warden?

If you’ve ever wondered what it’s like to be a North Carolina game warden, this clip will give you a small preview. […]

Operation Dry Water, a national campaign against boating while under the influence, begins this Friday, July 3, 2020. […]