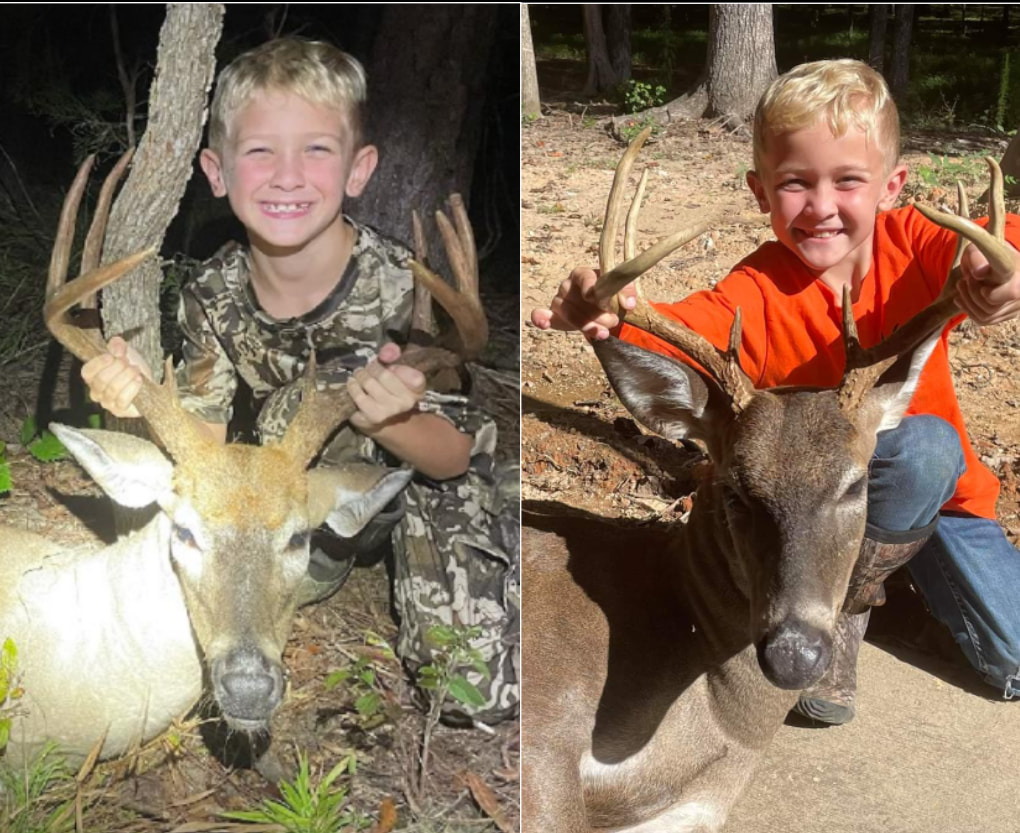 Both youth hunters were hunting with crossbows

Sept. 17 and Sept. 25 were big days for the Freeman family from Rock Hill, S.C. Holden and Hunter Freeman, 7-year-old twins, were the stars of the week. Their parents, Chelsea and Bo Freeman, played big roles in the youth hunters killing the best bucks of their young hunting careers.

Holden was the first young hunter to score. He was hunting with his mom on Sept. 17 when he killed a 9-point buck he had decided to target earlier this year after observing the deer on the family’s Tactacam RevealX trail cameras. He had nicknamed the buck Tank, and it was his target buck.

This wasn’t a blind hunt for Holden. His mom said he and his brother have been heavily involved in their Lancaster County hunting lease, which they secured back in June.

“He and his brother have spent many hours with their dad, prepping stands, running cameras, and scouting,” she said.

“We’ve always taught the boys that its not the size of the harvest; it’s the size of the hunt. But it’s always a bonus to have big bucks with nicknames to target. After watching a lot of these bucks grow from early July until now, we had Tank and his bachelor group patterned on this particular stand.”

That afternoon after school, Holden and his mom got in their box stand overlooking a field. Right away, deer began to show up.

“Does and yearlings immediately started entering the field, followed by a few small bucks that have been hanging close with Tank,” she said.

The young hunter knew his target buck must be nearby. So he waited, passing on other bucks he could have shot. At 7:05 p.m., his mom noticed movement. It was Tank entering the field. When Holden saw the deer, buck fever took hold.

As he tried to calm down enough to take a shot, something else spooked the big buck. It ran across the field. At first, Holden thought it was over, and that he’d lost his chance at the deer. Instead, Tanks made his way right back in front of the stand.

At 43 yards, Holden pulled the trigger on his CenterPoint crossbow. His bolt, fitted with a Rage Hypodermic no-collar broadhead, drilled the buck.

“It left us an incredible blood trail. We all began trailing him and ended up finding him laying on the edge of a grown up pasture. It was an amazing recovery, with tears of joy and so much excitement. It was an amazing hunt and an awesome buck,” said Chelsea Freeman.

On the afternoon of Sept. 25, it was Hunter’s turn. Hunting with his dad on the same piece of property Holden killed his buck, the set up at the edge of a big cutdown overlooking a food plot. Their trail cameras had been sending numerous photos of deer. The two biggest, nicknamed Bowinkle and Curly, were on Hunter’s hit list.

“We knew it was only a matter of time before Hunter connected with his crossbow,” said his dad.

Getting into the stand a little earlier than usual, they didn’t have to wait long for activity.

“From the time we sat down, we had deer enter the food plot. Does, yearlings, and small bucks,” he said.

A big surprise shows up

Around 7:15 p.m., a bigger buck was heading their way. Once it got close enough, they realized it was neither of the bucks Hunter was targeting. But it was definitely a shooter.

“As Hunter got into position and the bucks entered the plot, we then realized it was a bonus buck we had never seen before,” he said.

When the deer turned broadside at 43 yards, they young hunter took the shot. The deer bolted, but they knew it was a good shot. They watched the video of the shot, then began the tracking job.

“We tracked blood for about 50 yards. But it was so incredibly thick, and the blood stopped. I decided to back out and come back the next morning,” said Hunter’s dad.

They searched for about 4 hours the next morning, but found nothing. That’s when they decided to call Jamie Holler, a nearby tracker with a dog named Spud that is a North Carolina legend when it comes to finding deer.

“Within 5 minutes of Spud being on the track, he bayed only 80 yards from where Hunter had shot the buck. Everyone was filled with excitement. Hunter was overwhelmed with joy sitting behind the 180-pound, 10-point buck. Thanks again, Spud,” said Bo Freeman.

Congratulations to the Freeman twins, who are now entered in our Bag-A-Buck contest. Click here to enter your buck in the Carolina Sportsman Bag-A-Buck contest. We’re giving away some great monthly prizes, as well as a Grand Prize that includes a Millennium M25 hang-on deer stand and a 2-man, 2-day hunt for deer and hogs at Cherokee Run Hunting Lodge in Chesterfield, S.C.

Buck of a lifetime for Bonnie Wilbanks