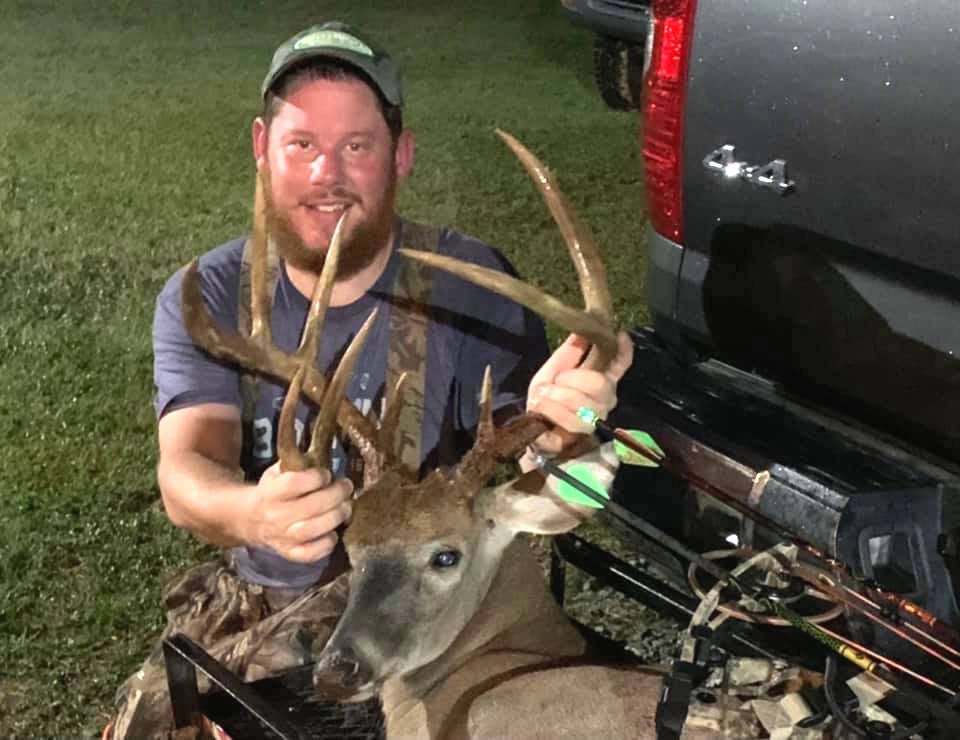 Jamie Moore of Stokesdale, N.C. killed a 12-point buck in Person County on Sept. 21 that’s been green-scored at 140 3/8 inches. He shot the deer at 28 yards from a ladder stand overlooking a cutover.

Moore had seen this buck on trail cameras and in the flesh on previous occasions. He had never gotten a clean shot at it, but had nicknamed it Captain Hook, and it was the No. 1 buck on his hit list for 2021.

With nearby corn fields about to be harvested, Moore knew his chances of bagging the buck would be slimmer once that happened. So he hunted hard for 2 weeks, hoping to get a shot at Captain Hook. His work schedule didn’t allow him any morning hunts, so he climbed into his stand in the afternoons, hoping for the best.

“My only chance to hunt was in the evenings. Being a bread vendor, I’m always up at 3:30 a.m., on the go to make our deliveries. Afterward, I’ll pick up my little one, then take a road trip to my parents place to hunt. Most of the time, I’m in the stand by 4:30 p.m.,” he said.

The 12-point buck was tough to pattern. Although it was appearing somewhat regularly on his trail cameras, it wasn’t every day, or even every other day.

“I’ve got another shooter on my hit list. It’s an 8-point stud which I missed on opening day due to a bad angle. The 8-pointer shows up just about every day. But Captain Hook was coming in only two or three times a week,” he said.

On Sept. 14, he saw Captain Hook and was ready for a shot. But with daylight waning, the opportunity slipped away.

“He showed up with three smaller bucks around 7:05 p.m. I was battling with time and darkness. I never had an opportunity to draw. So that made it a long ride back home,” he said.

Moore tried again on Sept. 16, but the buck didn’t show up. Then on Sept. 21, he had a good feeling thanks to the weather and other conditions.

“It was a rainy day with wind blowing SSW, and a day after the harvest moon. I was expecting good movement. Sure enough, around 6:15 p.m., Captain Hook was the last to come out of the thickness west from the stand with two smaller deer,” he said.

But the deer were approaching from a different route than they normally take. They were directly behind Moore’s stand. This meant the wind was working very much against the hunter.

“I thought my hunt was done for the evening. But the wind stop Captain Hook in his tracks. He was doing his best to smell or sense where I was. He stopped about 35 yards behind me where I couldn’t shoot while sitting down,” he said.

Moore, who is deaf, was careful not to make a move for fear he’d make a sound and alert the deer to his position.

“So I just kept my eyes on him. And every time he looked away, I slowly stood up and turned 180 degrees to the left. He was still there. Finally, I was in position to draw and he was behind some trees. All I could see was his head and half of the rack,” he said.

Moore drew back on his Bear Archery Divergent bow, then held it for about 3 minutes, waiting for the buck to reappear from behind the brush.

“He finally took a couple of steps out into the opening. I aimed at the only target I had — the top of his shoulder between his neck. And then I let the arrow fly,” he said.

The buck took off running back toward the cutover.

Moore got out of his stand and found the arrow. It was dripping blood. After an 80-yard search, he found the buck.

Congratulations to Moore, who is now entered in our Bag-A-Buck contest. Click here to enter your buck in the Carolina Sportsman Bag-A-Buck contest. We’re giving away some great monthly prizes, as well as a Grand Prize that includes a Millennium M25 hang-on deer stand and a 2-man, 2-day hunt for deer and hogs at Cherokee Run Hunting Lodge in Chesterfield, S.C.