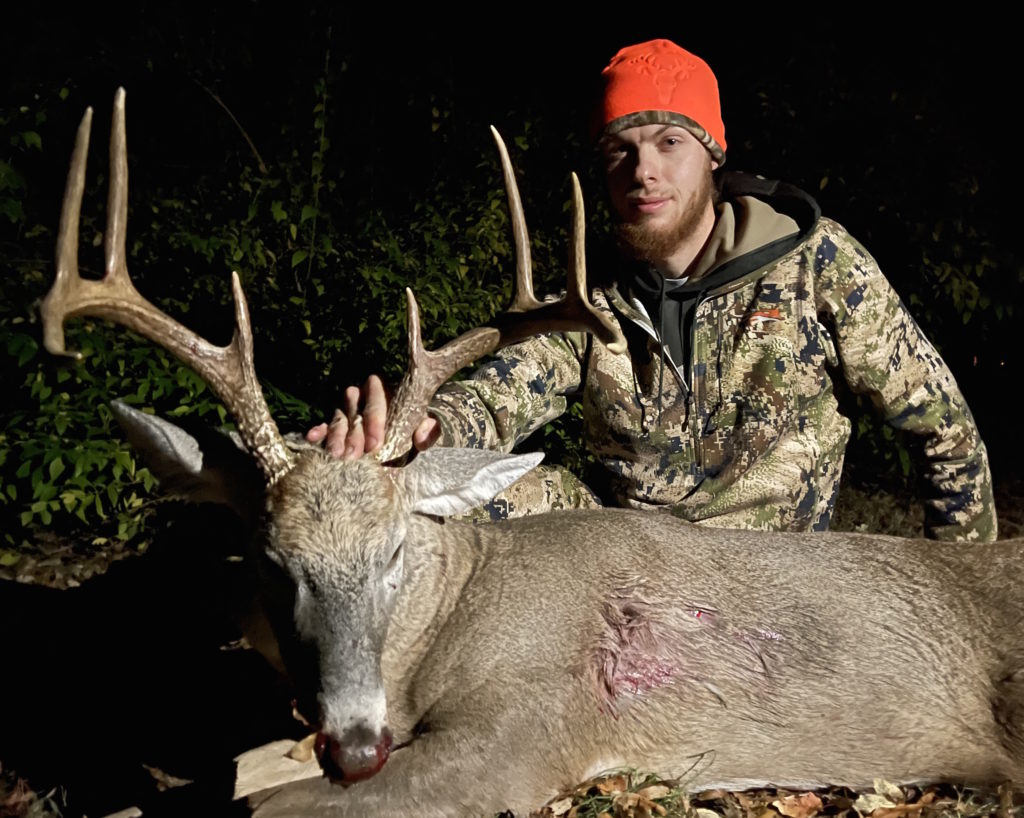 Third time is literally the charm for Rockingham County hunter

It took Kollbe Russell three trigger pulls before he got to tag a big buck on Nov. 7, 2021 in Rockingham County, N.C.

Nope, he didn’t miss twice, and the first two times he pulled the trigger, he was shooting at different bucks: a big 4-pointer and a nice 8-pointer.

Fortunately, when his gun finally went off — there’s the explanation — Russell, who lives in Summerfield, N.C., put a perfect shot through the vitals of a great 8-point buck. It weighed 186 pounds and green-scored 133 points.

Russell’s CVA Wolf muzzleloader failed to fire twice that day. He figured later on that he’d gotten his powder damp. On his first shot, that morning at a tall 8-point buck, the percussion cap popped. But the gun didn’t fire. That afternoon, about 4 o’clock, a buck with a tall, 4-point rack came along a trail in hardwoods where his Muddy ladder stand was located, a few yards off a fallow field close to where a cutover abutted the hardwoods.

This time, the cap popped. And a second or two later, the gun went off. It was a hang-fire in the parlance of blackpowder hunters.

On the spot, Russell removed the breech plug and gave the gun a quick cleaning. About 30 minutes later, his big buck showed up. It was on the same trail as the 4-pointer.

The big 8 shows up

I had about 15 minutes of shooting light left. And I heard something coming up the hill,” he said. “There was a doe coming down the trail. I figured that 4-pointer was running her. When I looked up, here came this big 8-pointer.”

Russell was familiar with the buck. He had trail-cam photos of him for several years. The buck hadn’t grown much bigger since his photos from 2020.

“He stayed about the same size. His tines might have been a little shorter. But he’d grown some mass,” he said.

This time, when Russell pulled the trigger, everything worked perfectly. The 100 grains of powder sent the 250-grain .50-caliber slug off through the woods, right to the buck’s shoulder. He could tell that the buck had been hit. But it took off running across the field. It disappeared into the woods 275 yards away.

Russell’s big buck had an 18-inch inside spread and three tines that measured between 9 and 10 inches long.

Congratulations to Russell, who is now entered in our Bag-A-Buck contest. Click here to enter your buck in the Carolina Sportsman Bag-A-Buck contest. We’re giving away some great monthly prizes, as well as a Grand Prize that includes a Millennium M25 hang-on deer stand and a 2-man, 2-day hunt for deer and hogs at Cherokee Run Hunting Lodge in Chesterfield, S.C.

I killed this 205-pound buck in Wadesboro, N.C. while hunting with my best buds. […]

Carson Foster, 12-years-old of Oak Grove, N.C., shot a nice Orange County buck in early November with a 170-yard shot from his muzzleloader. […]

About Dan Kibler 882 Articles
Dan Kibler is managing editor of Carolina Sportsman Magazine. If every fish were a redfish and every big-game animal a wild turkey, he wouldn’t ever complain. His writing and photography skills have earned him numerous awards throughout his career.