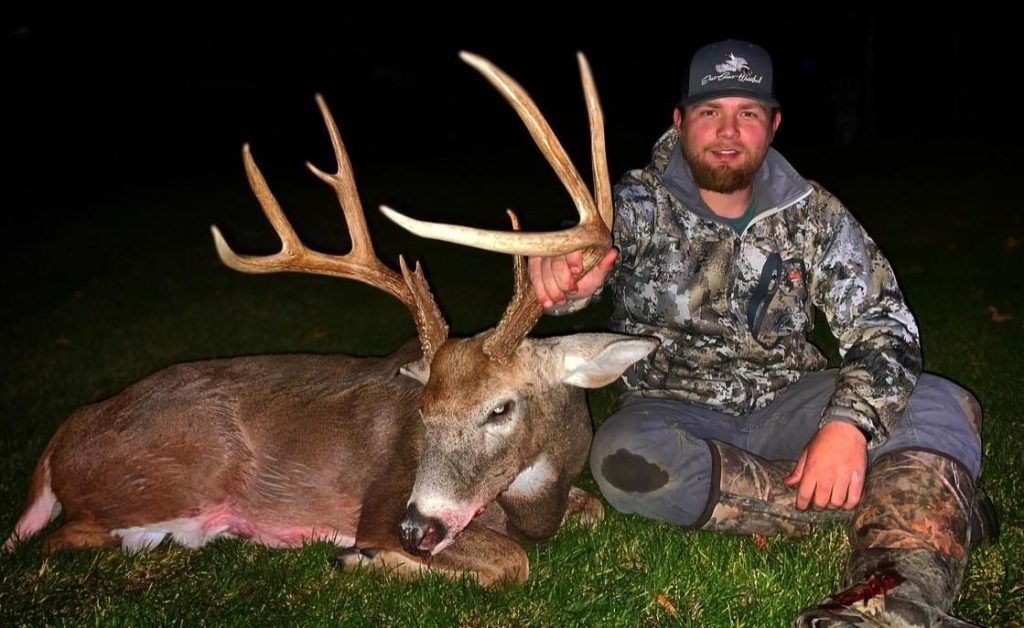 Ryan Long of Greensboro, N.C. killed an 11-point giant in Rockingham County on Dec. 5 while hunting over a food plot. The buck has been green-scored at 157 0/8 inches. Long knew of this buck from sporadic nighttime trail cam photos, but he wasn’t expecting it to show up during his hunt.

Long actually thought he might get a shot at a bear instead.

“I definitely knew there was a shooter buck around. I started getting him on trail cam back when he was in velvet. But as the season went on, he was showing up less and less and less. He never showed up during daylight. And he was on a pattern, but it wasn’t a pattern you could hunt him by,” said Long.

The deer would come to his food plot once a week, sometimes every other week. And it was always on a Monday or Tuesday, but always at 1 or 2 a.m.

“And lately on this trail cam, I’ve been getting pictures of a bear. So I figured I’d go in and hunt the bear,” he said. “I wasn’t expecting to see this deer at all.”

He was sitting in a double box stand with a friend and they began seeing does in the clearing.

“Two does were in the field to my left. And they kept looking down in the woods over and over,” he said.

Just a few minutes after 5 p.m., about 130 yards away, another deer stepped into the food plot.

Long shot the buck from 130 yards away

But his buddy told him it was time to get his gun ready.

“He said it was a big buck, and that I needed to get my gun ready. He said he wasn’t kidding, but I thought he was just messing with me. So I threw my binoculars up and recognized the deer. I said ‘that’s Stickers,’” he said.

The name Stickers came from Long’s trail cam photos of the deer, which showed two stickers off the deer’s right G2.

Long was ready to pull his Browning .30-06 up, but the deer was looking right at him.

“He finally looked away and I got my gun up, put it on him and smoked him. He never moved after that,” he said.

The 11-point giant was a mainframe 8 with a split brow tine and the two stickers off its G2. It weighed about 195 pounds. Long estimated the age at 5 1/2-years-old. The buck had a 20-inch inside spread.

Long is no stranger to killing trophy bucks, and he’s had an especially good season this year.

In November, we featured Long with another Rockingham County brute. That was a 10-point buck that green-scored 141 2/8 inches. And between that hunt and this one, he went on a bowhunting trip in Kansas where he killed a 157 6/8-inch, 10-point buck.

“I’ll never have another hunting season as good as this one,” he said.

About Brian Cope 2087 Articles
Brian Cope is the editor of CarolinaSportsman.com. He has won numerous awards for his writing, photography, and videography. He is a retired Air Force combat communications technician, and has a B.A. in English Literature from the University of South Carolina. You can reach him at brianc@sportsmannetwork.com.
Website