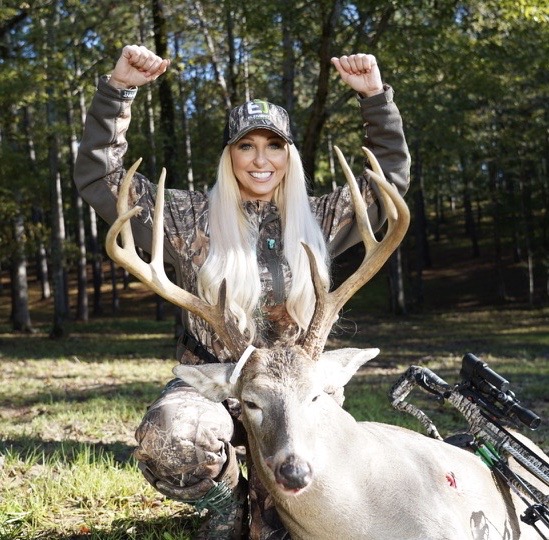 Becca Bowen of Lexington, S.C. is an avid outdoorswoman who loves to hunt and fish. She is starring in an upcoming competitive hunting show called For Love or Likes that will air in April on The Outdoor Channel and The Sportsman Channel.

The show features four women heavily involved in the outdoors, including Bowen, who have big social media followings. The premise of the show is to find out if these women hunt and fish because they truly love it, or if they do it to rack up social media likes.

Proving herself as a true hunter appealed to Bowen.

“It’s called For Love or Likes because they want you to prove that you’re a real hunter. Are these girls just out here hunting to get popularity and likes on Instagram and Facebook? Or are they real hunters? I love that concept because hunting is a huge part of my family. And I wanted to go and prove myself,” she said.

Bowen isn’t allowed to say who won the competition just yet. But she said she performed really well on the show and is proud of how she represented her family and the state of South Carolina. She credits her brother Tommy and her friend Buck Koon of Carolina Crazy Outdoors for teaching her so much about hunting. She said it helped her immensely in the competition.

“My brother has taught me pretty much everything I know about hunting. One of the things that he does when we go hunting is look for trails and scrapes. So that’s what I did,” she said.

After finding a good trail with some scrapes and other sign, and picking out two bucks on trail cameras she knew were worthy of shooting, she hunted hard. She passed on a shooter buck within the first few minutes of the competition to wait out one of the trophies. It took a couple of days, but it worked out for her. She killed the biggest buck of her life while also completing several other hunting challenges during the filming of the show.

Bowen was invited on the show after a video of her “noodling” or hand-grabbing a 45-pound catfish went viral on social media earlier this year.

“The Outdoor Channel saw this video of me pulling out this 45-pound catfish and they immediately sent me an email asking if I would do the show,” she said.

She accepted the invitation without hesitating.

Hear more of our interview with Becca Bowen here:

During the competition, Bowen said they hunted from sunup to sundown for a solid week. This included hunting the outer bands of a hurricane that blew through. She said it was a very rewarding experience and looks forward to seeing the show — and to getting her deer mount back from the taxidermist.

Aside from hunting and fishing, Bowen is a personal trainer and the reigning Miss Bikini Fitness USA. She’s also a rising country music star, releasing one single earlier this fall entitled Love It, Leave It. Her next single, Just Be You will be released Jan. 7.