When October arrives, it takes a special hunter to tag a big buck. Here’s how a handful of North Carolina hunters made for a happy Halloween.

October is called the “hunting-moon” month, because deer become active and more visible to humans.

Whitetail bucks seek food to increase body weight; they make scrapes, rub trees with their antlers, fight rivals for does and begin to seek mates.

Those behavioral changes influence how to pattern deer movements, but like a jazz ensemble, North Carolina hunters often improvise old strategies to get within bow, muzzleloader, rifle or shotgun range.

Here are some lessons from hunters who adapted tactics to bag some of October 2019’s finest bucks.

Todd Faucette, 57, of Harnett County, began learning about whitetails in 1981 as an 18-year-old, charter member of the Wake County Wildlife Club.

After 39 years of rubbing shoulders with experts, he has a master’s degree in pursuing deer. October is his favorite month to stalk wall-hanger bucks, because, he said, conventional wisdom is wrong about the 10th month.

“People talk about the ‘October lull’, but it’s a good time to kill a big deer,” he said. “I think many people don’t have enough places to hunt, so they overhunt their places.”

Faucette and his friend, Jay Adcock, tag-team whitetails. Also a Wake County Wildlife Club member, Adcock “probably has killed more big bucks than anyone in North Carolina,” Faucette said. “(Successful hunting) is ‘we, we, we,’ not ‘me, me, me.’”

Both favor archery equipment because it requires getting close to deer.

“Trail cameras let us know what’s there or isn’t; that’s more important than anything,” said Faucette, whose strategies paid off last Oct. 16 when he drilled a 10-pointer that scored 1537/8 gross and 1506/8 net inches. A trail cam snapped an image five days before Faucette downed the buck.

“We set 25 Covert trail cameras in 20 counties at corn piles,” he said. “We rarely get turned down by landowners. They might look funny at bowhunters, but they don’t like guns going off on their property.”

Faucette tagged his buck near a trail that meandered across a pine ridge and dropped into a Wake County creek bottom.

“We’re fanatical about camouflaging tree stands, not so much scent (control),” he said. “A downwind deer will smell you.

“If (cover scents) worked, no one would get busted. Even guys who promote that stuff on TV admit it’s not fool-proof. But if you’re well hidden, you’re ahead of the game.”

At the other end of the spectrum, 54-year-old Tracy McCorkle of Mecklenburg County did an October favor for a tree farmer and earned a No. 1 spot in North Carolina’s all-time record book with the biggest non-typical ever taken with a crossbow.

The landowner gave McCorkle permission to hunt bucks that were shredding his decorative crepe myrtles and holly trees. He scouted one October day, and the next, using a Mathews MXB Mission 320 crossbow he’d never fired at a deer, killed a top-ranked buck.

“I set up a ground blind next to the path that came from a neighbor’s property,” said McCorkle, whose blind was a hole at the base of a decaying tree trunk. McCorkle camouflaged the spot with dead limbs and cut cedars.

“No one had hunted there a long time,” he said. “Deer probably were coming through because they weren’t pressured.”

The next day, he drilled the buck at 5 p.m. as it walked within 15 yards, following a doe. McCorkle’s bolt sliced through the deer, which ran 60 yards, stopped, looked back and fell dead. The shaking hunter waited 10 minutes then walked to his prize.

“The closer I got, I couldn’t believe what I was seeing,” McCorkle said. “I’ll never see a deer like that again.”

Even with little preparation, he recognized buck sign — a hot deer trail and large rubbed trees — then cobbled together a ground blind and downed one of North Carolina’s biggest all-time bucks. 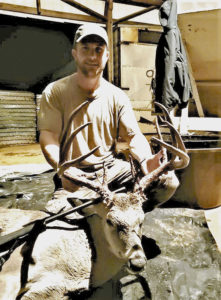 Matthew Daughtry of Smithfield proved that patience is a virtue by waiting three years to pull the trigger on a huge buck last October.

In 2017, Daughtry, 30, had early trail-cam photos of the buck, but the deer disappeared after the rut.

“In 2018, I didn’t get any pictures, but I wouldn’t have shot him; he still had potential,” he said. “But I worried until my uncle found a shed horn.”

Daughtry had placed bow stands in oak woods and rifle stands at the north and south sides of cutovers and bean fields. Archery season offered no shots, then Daughtry twice passed up 300-yard rifle shots on Oct. 12.

“I came back the next morning, passed up another long shot,” he said. “I came back that afternoon, and he walked into the field at 3:30 p.m.”

With the deer 150 yards from his tree stand, Daughtry settled the crosshairs of a Vortex scope, mounted on a Winchester Model 70 .30-06, on the buck’s shoulder and squeezed the trigger. The deer ran 30 yards and piled up.

“I don’t worry about scent control during bow season because my stands are 25 feet high,” he said. “But I don’t ignore wind direction; I hang lots of stands.”

Durham’s John Henderson dropped a Warren County 12-pointer during October 2019 that sported 1567/8 net and 1654/8 gross inches and was the biggest typical buck taken by a North Carolina gun hunter in 2019, according to the Dixie Deer Classic’s big-buck contest.

A former Burlington Industries employee who teaches school-bus safety in Virginia, Henderson, 71, is the oldest member of the Axtell Hunt Club in Warrenton, N.C.

“I’m part of a dying sport: deer-dog hunters,” he said.

Trail cameras had captured a large buck’s image on the club’s hunting property. The club released 15 hounds near the buck’s woodlot home when the season opened Oct. 17.

“When they jumped him, he ran toward a big highway,” Henderson said.

Knowing deer often circled back via a wooded funnel after they reached the road, Henderson walked to the hardwoods strip and waited.

“After 10 minutes, I saw him running straight at me,” he said.

When the buck got to 35 yards, Henderson shot twice with his buckshot-loaded, 12-gauge autoloading shotgun.

“The second one put him down,” he said. “I had no idea his rack was that good.”

The buck’s rack had no abnormal points and only 85/8 inches of asymmetrical deductions.

“I’ve been a deer-dog hunter for 45 years, and this was my best buck,” Henderson said.

Henderson proved an old dog with local knowledge could take a trophy whitetail.

Edisto flounder are plenty of hungry in October. […]

Do you know the baiting and hunting laws for dove season? This guide will help. […]