Dieter Melhorn knows plenty about catfishing, being a guide and producing a fishing series, “Dieter Melhorn Fishing” on YouTube. But When asked which species of catfish was the easiest to pattern and catch during October on Lake Wylie, he had to stop and think for a minute.

“I’d say it’s easier to catch flatheads on Wylie this time of year,” he said. “It’s almost like they tend to drop their solitary ways and school up, but October is also a good time to catch numbers of decent-sized blues.”

Melhorn, who grew up in Cramerton, N.C., several miles upstream from Wylie on one of its major tributaries, the South Fork Catawba River, said the better fishing for trophy blues occurs during November and December, but he never rules out the chance of catching a trophy blue on Wylie this time of year.

“The blues and flatheads are not necessarily on different patterns now; they’re both keying on baitfish in less than 30 feet of water,” he said. “Early morning and into the evening, that means they could be in as little as 5 feet of water, but it’s the baitfish that gets them there.” 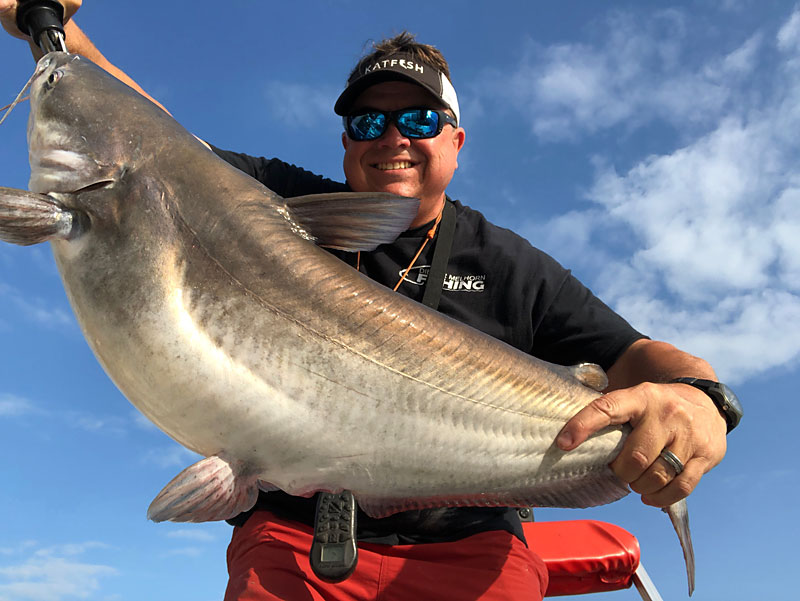 Melhorn said all standard catfish tactics will catch fish on Wylie this month, but his preference is to troll for blue catfish and anchor up and put out static lines for flatheads.

“The flatheads will get on a ledge, a point or some odd piece of topography,” he said. “Even just a washout — a deeper area along a creek channel — will hold flatheads, and if you catch one, you need to keep fishing, because it’s very likely there will be several more in that same spot.”

Melhorn said blues can also be pin-pointed and anchored over, but he prefers to troll for them.

“Drag, drift, troll — whatever you want to call it,” he said. “I’ll go about halfway to the back of a creek that’s holding bait, and I’ll troll at around a half-mile an hour, moving out toward the mouth of the creek. Sometimes, I may stop halfway and go toward the back, but most of the time, I go shallow to deeper.”

Like most veteran catfish anglers, Melhorn uses a variation of a catfish trolling rig that incorporates a 6- to 8-inch slinky weight designed to pull across bottom structure without snagging and a small, brightly colored crappie float to float the bait up above the weight, just off the bottom.

“In the fall, my bait choices change over from cut bream to white perch and even chunks of gizzard shad,” he said. “I also start upping the bait size; I want to make sure I have at least a couple of nearly hand-sized baits in my six-rod spread.”

Because catfish, particularly blue catfish, are keying on baitfish migrations, Melhorn does not put as much emphasis on marking catfish on his sonar as he does marking baitfish. He said catfish are typically spread out throughout an area, looking for an opportunity to eat something.

“I find a lot of correlation between the location of panfish anglers and blue catfish,” he said. “It’s a matter of who’s eating who below the surface, but the panfish guys are trolling for crappie and perch, which are also moving with baitfish schools. The crappie and white perch are keeping the baitfish schools broken up and on the move, and that’s good for catfishing.”

Melhorn said the one big exception to that is finding too much bait in a creek. When a creek is full of bait — but they’re all lumped into one mass school with few or no other predators moving about — he will make a mental note to check back later, but he’ll go look for another place to fish.

“I typically either net shad or catch perch a day or so before my fishing trips, but I also keep a double-hook rig out when I’m trolling for catfish,” he said. “It’s baited with live crappie minnows, and I work it just off the bottom. Not only does it catch me a few fresh baits while I’m catfishing, it’s also a good barometer of what’s happening below the boat. If I’m pulling through loads of bait with no perch bites. It’s likely there are no catfish around, either.”

When anchored up and fishing for flatheads, Melhorn forgoes the typical live-bait requirement that most flathead anglers follow.

“I use cut bait for flatheads, particularly on Lake Wylie, for two reasons” said Melhorn. “The first is that for some reason, channel catfish usually find a live bait before a flathead does and they will kill it, just nail it and rarely get the hook and leave the bait dead on the bottom. So second, if I’m going to be fishing with dead bait, by choice or not, I’d prefer to have something that is going to leave scent in the water and make it easier for a big flathead to find.”

Melhorn said reservoir flatheads are much different, in his experience, from river flatheads. He said using anything but fresh, live bait in a river is unthinkable, but he has caught a lot of flatheads in reservoirs on cut bait. He relies on wind or boat-wake current to spread the scent as well as turning the reel handle a few cranks every 10 minutes or so to drag the bait across the bottom and disperse more scent.

Guide Dieter Melhorn said catching the right bait for successful catfish outings is half the battle. He targets two main species during the fall — gizzard shad and white perch — and has different methods for acquiring each.

“White perch will school heavily in the fall, especially on a secondary point in 15 to 20 feet of water,” he said. “Sometimes, there will be a piece of structure like a brush pile or some stumps that they congregate around, but most times, it’s just a holding spot, waiting on the next school of threadfin shad to wander by.”

When he can get on top of a school of perch, a Sabiki rig with No. 6 or smaller hooks can be dropped and jigged vertically to catch the perch.

“When you feel one hit, just keep jigging and wait for the other hooks to load up,” he said. “I end up catching five to seven fish at a time doing this. It’s a lot of fun and will fill the bait bucket in a hurry if you can get on them like this.”

Melhorn said cast-netting gizzard shad is the best way to stock up on what he considers a great fall catfish bait. He admits that Lake Wylie has a good population of gizzard shad, but it is not the best place to net them.

Instead, he heads down to nearby Lake Wateree in South Carolina and will spend the last couple of hours before dark in a creek looking for dimpled water in 3 to 5 feet of water and usually has all he wants before sunset. 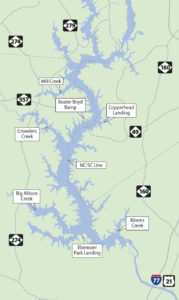 HOW TO GET THERE — Lake Wylie is on the Catawba River chain, southwest of Charlotte, N.C., and north of Rock Hill, S.C. It is easily accessed from I-85 and I-77. Buster Boyd and Copperhead ramps at mid-lake are popular public boat landings. On the lower end, Allison Creek, Nivens Creek and Ebernezer Park give anglers access to that half of the 13,400-acre lake

WHEN TO GO — October kicks off good fishing for flathead and blue catfish on Lake Wylie. The action can last through December.

BEST TECHNIQUES — Drifting around schools of bait for blues or anchoring around deep cover for flatheads are proven techniques. Use cut white perch or gizzard shad for baits, and go big.

Some of the oldest trout flies tied in this part of the country are still some of the best on trout waters in the high country of the Carolinas. […]

Target Swansboro reds with topwaters on high end of tide

SPRO has long produced excellent baits for fishermen of all backgrounds, and its recent offering of a beefed-up bucktail jig, the Power Bucktail HD, brings even more great features to the fishing world. […]