Many outdoorsmen turn their focus toward the woods in September, and the attraction of early season bucks is strong. But the allure of fast-paced, explosive largemouth bass action on South Carolina’s Cooper River is even stronger with many diehard bass fishermen.

The robust bass population in the river, coupled with prime bass habitat, produces tremendous late-summer bass fishing. Multiple lures will work, but the topwater bite is the “go-to” tactic for outstanding fishing.

David Murdaugh has fished the Cooper River and the Santee Cooper lakes his entire life, and the 55-year-old has been guiding the past 11 years.

He said the Cooper River bass fishery is simply amazing

“The largemouth bass fishing on the river is incredible, and the great action holds up through the summer and into the fall,” he said. “I’ve tracked tournament results for years, and the winning weights for a 3-hour tournament range from 17 to 25 pounds on any given evening. Plus, it’s very competitive, with several guys usually stacked near the winning weight. That’s close to 4- to 5-pound average (for) a five-fish limit in only three hours of fishing. Yeah, I like bass fishing the Cooper River.”

To get those kinds of results, Murdaugh said finding patterns quickly is one key. But the dynamics of the river require anglers to constantly revise their gameplans throughout the day. 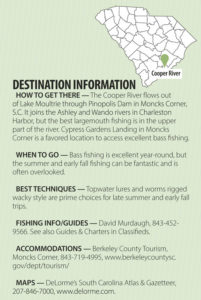 “The Cooper River is dramatically impacted by tides, and the bass bite will ebb and flow with the tide,” he said. “Fishing success is more about adjusting to what the situation is at any given tide. But fishing can be good on any tide.”

Murdaugh said by mid- to late summer, vegetation growth is abundant. That growth holds scads of bass. But getting a big fish out of it often creates intense drama when one is hooked. But the first priority is getting the big fish to bite.

“Topwater lures and plastic worms are two of my most effective tools,” he said. “Plus, I just love the thrill of catching bass on topwater, so it’s perfect for those who enjoy topwater action.”

Murdaugh said weedy cover such as hydrilla, hyacinth and other vegetation hold bass and is abundant along the river. But cover alone is not enough for consistent action on quality fish. Specific areas such as deeper ledges and creek and river junctions with weedy growth are both prime targets.

“Fishing the breaks all along the river that lead into shallower water off the main channel is the general theme. But you’ll have to search for some of the more isolated ones that aren’t fished heavily,” said Murdaugh. He also has success fishing long stretches of water adjacent to the river channel but keys on areas with multiple small points and pockets lined with weedy growth.

Look for anything different

“Bass are looking to ambush prey, and they’ll hold on these small points and pockets,” he said. “Anything different can hold a big bass on the river, and they’re often targets fishermen can identify.

“A break that leads back into a shallow flat or small creek is excellent. The water flowing in or out of the breaks into the river creates an eddy. And any nearby weeds, stumps or old pilings enhance the potential.”

Murdaugh said it’s around such areas that multiple big bass tend to congregate, so he’ll fish them thoroughly. And it’s not a bad idea to circle back to the area later to re-check it. He keeps his graph running and is always on the lookout for bass and forage.

“I like seeing shad and other potential forage on the graph. It’s another piece of the puzzle,” he said. “The more pieces I have connected in an area, the better my odds of catching fish.”

Don’t stick with the same lure for too long

Murdaugh said the consensus is the late-summer habitat is ideal for topwater lures and worms.

“I’ll use a variety of lures during the course of a day’s fishing to determine what the fish want at that time,” he said. “Casting ability is crucial, and being able to thread the needle and hit the target puts more big fish in the boat.”

Murdaugh will switch lures regularly if he’s not consistently getting bites.

“I’ve learned to not get locked into any one lure unless I’m catching fish with it,” he said. “My favorite topwater lures for the river are a Pop-R, frog, Whopper Plopper and both the Tiny and Baby Torpedos.”

Murdaugh said all these topwater lures will catch big fish but his go-to bait for Cooper River hawgs is a frog.

The frog can make you a hero or a zero

“I love my frog for big bass on the Cooper River,” he said. “It’s very consistent for me. But some days I’ll be a ‘hero or zero’ with the frog. It’s a matter of knowing when to stick with the frog or change when the bite is off.”

He’ll fish Flukes in situations such as schooling-fish action that occurs throughout the day this time of the year. He’s always got a Fluke and a heavy topwater for long-distance casting rigged and ready.

“Good places to fish the wacky worm are stumps, logs, blowdowns and around breaks,” he said. “The combination of a rocky shoreline with thick vegetative cover that drops quickly is a prime target for wacky worms.”

Guide David Murdaugh said success catching bass on the Cooper River is directly linked to working the right patterns on the ever-changing tide.

“The key to catching lots of bass on the Cooper River is understanding and adapting to tides,” he said. “A good example is, I’ll have a period when water conditions are prime for a specific type area, and I’ll do well, but I’m also thinking ahead, knowing that the lifespan of this specific area is limited. I’m planning strategy for the next spot while still focused on fishing where I’m currently casting.”

Murdaugh said specific targets that are prime at one water level are not necessarily going to be good on another. But having moving water, whether outgoing or incoming, is better for fishing.

He said his favorite tide for bass fishing the river is a high and falling tide if he has several hours to fish.

“But if it’s a short time-window, such as a 3-hour tournament, I want a dropping mid-tide,” he said. “The key is studying the river to learn what happens to a specific area from one tide extreme to the other. A place that’s usually great on a high tide may not be special on a low tide, because of water level, availability of forage and the cover and weed situation.”

The bottom line, he said, is bass are caught on all tide levels, when fishermen understand the impact tides have and adapt to those changes.

At High Rock Lake, trolling with cut baits is a top tactic when targeting channel catfish throughout September. […]