The waters off Oak Island are the place where the fall king mackerel bite, especially big kings, takes off when October approaches the North Carolina coast. Here’s how to extinguish a smoker.

Fall fishing in southeastern North Carolina would not be complete without the arrival of king mackerel tournaments. The fall bite can be literally explosive, and few diehard anglers will avoid hitting the ocean to get in on the action.

Tournaments are a popular way for many anglers to fish with a purpose besides putting meat on the table, and finding the heavy hitters that rise to the top of the leader boards is an art, well performed by many top-tier performers.

The most-popular tournament is the U.S. Open, headquartered in Southport. For 42 years, it has brought hundreds of anglers to the coast to test their skills, and it is not just one of the typical king mackerel tournaments held up and down the eastern seaboard. In addition to the regular tournament fishermen, the U.S. Open brings dozens of local and amateur king mackerel anglers to the table. And what better resource would be the top-tiered tournament teams that always show up in the top 10 on the leader boards. 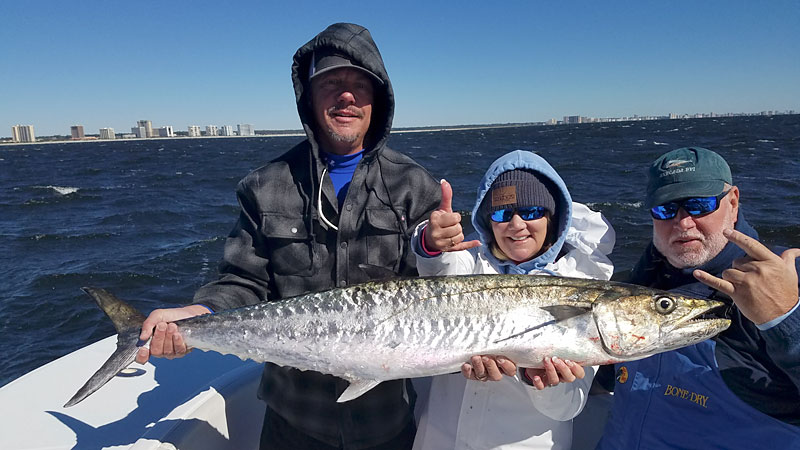 One of the most-decorated king mackerel anglers is Kevin Sneed of Rigged and Ready Charters of Holden Beach, N.C. For nearly 20 years, he has trolled the Atlantic for every pelagic fish around and has fished hundreds of king tournaments, winning his share and winding up near the top of the leader board plenty of times.

For Sneed, who also owns Rigged and Ready Fishing Center in Holden Beach, king mackerel fishing in the fall is explosive and one of his favorite times to fish for these toothy critters.

“In October, we get cool nights, and the water temperature falls; that makes the bite really good,” said Sneed (910-448-3474). “The fish start feeding real heavy to fatten up for the winter, and there is food all over the place.”

The cool weather brings the ocean water temperatures along the beach into the low 70s and upper 60s, and baitfish cover up nearshore places. Menhaden and mullet are abundant, and kings and other predators are flush with feeding opportunities. With fresh bait, catching them can be an easy task, but catching big kings, aka “smokers,” is something that can be a little more difficult. Some might say it’s luck, but tournament leader boards tell a different story, with the same teams regularly occupying the top spots. 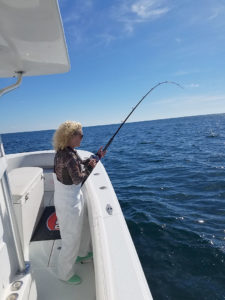 “Just about every year, the U.S. Open is won within sight of the Caswell Beach lighthouse,” he said. “You can catch kings from the beachfront in shallow water and out at the Shark Hole and the Jungle in deeper water. Essentially, you will get more bites in deeper places and fewer bites in shallower spots nearshore, but the larger fish are nearshore.”

It is not uncommon in fall to get dozens of bites in deeper spots just offshore, with 15- to 25-pound fish common. The larger fish are hovering around nearshore places where the bait is thick, where they have to spend minimal effort to fill the tank every day.

“We target places in close that congregate bait,” Sneed said. “We like Lockwood Folly Inlet, Shallotte Inlet, Lighthouse Rock, Yaupon Reef, and any livebottom and ledges nearshore and also tidelines,” he said.

Typically, Sneed will slow-troll live menhaden or mullet around these features and stick around when the action takes off. But he will also anchor up over some of these places, especially during a north wind.

“When the fall weather hits, we typically get north winds, and stationary methods seem to work better for bigger fish,” he said. “We anchor up, chum real heavy and use kites and a standard balloon rig with large baits.” 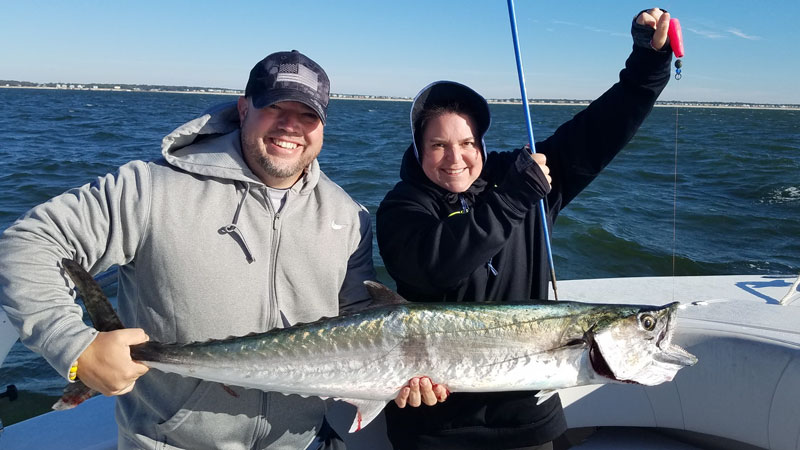 North winds along North Carolina’s southern coastline of produces calm seas nearshore along Oak Island, making it a perfect place for anglers looking to score on a big king in fall.

King mackerel fishing can be quite productive in the fall; the bite is good, and the area generally has plenty of takers. But catching a big king — for fun or to grab a chunk off prize money — can be a little more challenging, and somebody wins every time.

King mackerel fishing is not too different from many other ways fishermen target apex predators. Live bait presented in front of these fish will generally produce a quick bite and good results.

But the way to target bigger fish is somewhat controversial when it comes to bait size — and even bait type.

Kevin Sneed of Rigged and Ready Fishing Charters said big baits are a good way to dupe a large fish into eating something laced with sharp hooks.

“There is a famous saying that elephants eat peanuts. Surely, you can catch big fish on small baits, because we do it all the time,” Sneed said. “But some of the biggest kings I have ever caught were on huge, 15- to 18-inch mullet.”

Large and small baits can catch different-sized fish. Large baits will not stop a smaller king from taking a swing at it, but one may stand out and be just enough to encourage a 45-pound mackerel to strike when he’s passed by plenty of smaller baits.

“When you fish with large baits, you are really just looking for one bite from the largest fish in the area,” he said.

Typically, Sneed will use large mullet, but he also likes to use large lizard fish or ribbonfish. They provide a larger presentation that can push a big king mackerel into committing. And after one of these monstrosities commits to eating, its on, and the reward can be a big payout.

HOW TO GET THERE — Southport, N.C. is on the mainland, close to the inlet where the Cape Fear River pours into the Atlantic Ocean at the east end of Oak Island. Holden Beach, N.C. is several miles to the west, close to Lockwood Folly Inlet on the west end of Oak Island. US 17 parallels the coast, with NC 133, NC 211 and NC 130 bringing anglers to the coast.

WHEN TO GO — The big fall king bite usually kicks off in late September, with early October the peak. Fishing can be good into November.

I literally cannot wait for October to get here. Yeah, I know, most people who love being outdoors do, because summer’s heat is behind us, and there are plenty of things to do that involve a gun or a rod. I love catching speckled trout and bass and crappie, but it’s something else altogether that cranks my engine. […]

It’s time to apply for waterfowl lottery hunts in South Carolina for the 2020-21 waterfowl seasons. […]

Pick that first kayak: Here’s how to know your options and what they mean […]

About Jeff Burleson 1410 Articles
Jeff Burleson is a native of Lumberton, N.C., who lives in Myrtle Beach, S.C. He graduated from N.C. State University with a degree in fisheries and wildlife sciences and is a certified biologist and professional forester for Southern Palmetto Environmental Consulting.