The weeks before peak whitetail breeding often provides the most buck movement and best chances to wrap your tag around a big set or horns. Take advantage of the pre-rut. 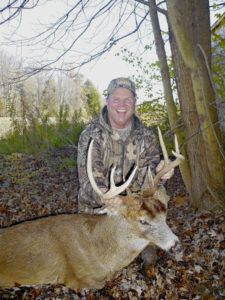 The “pre-rut” is an often-discussed but sometimes overlooked, short window of opportunity for targeting big bucks. While the rut is the focus for many, and rightly so, the pre-rut has some distinct advantages for those willing to learn when it occurs on the land they hunt.

The key to taking advantage of this time of the season is knowing when it occurs; one veteran deer hunter said that process occupies a short niche of time just prior to the rut.

Steve Cobb of Union, S.C., a pro-staff member for Hunter Specialties for 25 years, specifically targets this short window of opportunity for big bucks.

“The pre-rut is all about the buck and doe ratio in terms of how many does are ready to breed compared to bucks ready to mate,” Cobb said. “I’ve tracked the pre-rut and rut for many years, and in the Carolinas, we have what I call a trickle rut. Out west, I’ve experienced times when almost overnight, the vast majority of does are in estrus, and the hunting goes wild, literally overnight. Here, in the time between early season hunting and the actual rut, a few does go into estrus, but almost all the bucks are ready to breed. That’s a numbers game that works to the advantage of hunters with a good plan.”

Bucks are pushing does almost around the clock during the pre-rut, Cobb said. With only a few does in estrus, bucks are almost frantically looking for the receptive ones and may move even more than they do when the rut is full-on.

“During the rut, enough does are in estrus where a dominant buck can find one fairly quickly, and that buck may be locked up and can be harder to effectively hunt,” he said. “During pre-rut, the bucks may travel long distances, scouring the woods, fields and food sources, often chasing multiple does before finding one ready to breed. This large travel zone is the ideal time to hunt.”

“The pre-rut phase varies throughout the Carolinas,” he said, “but when I begin seeing scrapes and rubs, I know it’s getting close. My trail cameras will also begin picking up a lot more buck movement during daylight hours — and around the clock, actually.”

In addition to paying attention to buck sign, Cobb also listens for bucks fighting just before the pre-rut.

“Bucks fight to establish dominance for breeding season, and this fighting produces a good opportunity for hunting. It also signals pre-rut is imminent, if not already started,” he said. “Cool snaps at this time also jump-start the big-time buck movement.”

This is when Cobb focus on pre-rut hunting areas; he said the weapon of choice impacts where they should hunt.

“I’m going to hunt food sources, because I’m primarily a bowhunter,” he said. “Muscadines and persimmons are premium targets for hunting pre-rut, because both are available and are prime food sources and are usually found in habitat conducive to bowhunting.

“Bowhunters have to get close to the food source or hunt on highly used trails entering food plots, because they must be close to the deer,” he said. “Oak hollows are another favorite for pre-rut hunting.”

Cobb said when hunting acorn hollows, the white oak is king. He’ll scout acorn hollows, and if he finds acorns abundant, especially white oak acorns, he knows he’s in the right area. Red oaks will do if white oaks are not available or not producing.

“My go-to tactic to determining if I’m in the right area is to find white oak acorns and squirrels,” he said. “Squirrels will find the best acorn food source before deer.

“When I go into an area that has a lot of acorns and plenty of squirrels in the woods, I’m going set up a pre-rut deer stand,” he said. “I typically use climbers for mobility and the ability to pick just the right spot with wind considerations.”

Cobb said it may be hard to find, but his absolute prime pre-rut bow stand situation is to have a 3- to 5-year-old clear-cut, regrowth area adjacent to acorn-bearing white oaks. An agriculture field adjacent to oaks is another good option.

“The regrowth in the clear-cut is prime bedding area, and the woodline adjacent to it can be a prime feeding area,” he said. “Ideally, a big white oak tree on the edge of the woods and clear-cut will enable me to get back in the woods about 20 yards and set up a bow stand.”

If carrying a gun, a hunter can set up further away, as long as a good sight line to the target exists. Cobb said gun hunters can also hunt large agriculture fields, such as soybeans. In this situation, he’ll set up at a much-longer distance since he’s using a high-powered rifle and quality scope to cover a lot more territory.

“The pre-rut affords a rifle hunter a great opportunity, because with the right setup, they can cover a significantly larger, productive area,” he said. “For example, they can simply set up high and overlook a large clear-cut and likely see bucks pushing does in the interior of the field, while also watching the edge of the field and woods.”

A hunter carrying a rifle can also effectively hunt other situations, including woods roads, powerlines, beanfields and large food plots to watch for bucks seeking does. But finding the exact spot to set up is only part of the challenge, Cobb said. Whether bowhunting or hunting with a gun, having the wind in your face while watching your target is imperative.

“During pre-rut, bucks are focused on does, but they generally don’t get stupid,” he said. “I can fool a deer’s eyes with good camouflage. I can fool his ears at times with vocalization, because pre-rut is prime time for vocalization and rattling. But his nose is hard to beat, other than by playing the wind perfectly. I cannot stress that enough. I play the wind right, even if I’m 100 yards or more from my target. I’ll still use a cover scent such as Hunter Specialties’ Earth Wafers.

Cobb said the pre-rut transitions directly into the rut, accepted by most as prime time for hunting. But taking advantage of the pre-rut usually affords more than just a prime opportunity to see or harvest a trophy buck; it also allows him to see lots of bucks of all ages and sizes.

“Along with my trial cameras, it enables me to know what’s available on the land I hunt in terms of potential trophy bucks,” he said. “I can make a hit-list of bucks I want to target and can identify bucks I’ll pass to let them grow for future seasons.”

“The pre-rut is not only an exceptional hunting opportunity, it prepares me for the next major segment of the hunting season, the rut.”

The biology of the pre-rut

Biologist Charles Ruth of the S.C. Department of Natural Resources, has studied thousands of harvested deer and has done so over a period of many years. He said a short period of time between summer deer patterns and the full rut typically represent very active deer movements that hunters typically refer to as “pre-rut.”

Ruth said biological changes in deer, particularly bucks, from the early season to the rut creates a prime hunting opportunity.

“Specific times vary throughout (South Carolina), but generally, toward the end of September into early October, hormonal changes begin to occur in deer,” he said. “Physiologically, bucks are ready for reproduction when they shed their velvet, and at the same time, their coats being to change and bachelor groups are abandoned.

“Bucks muscle up in response to increases in testosterone as their body transforms for the rut. They begin to strive for dominance, and they leave more sign in the woods with rubs and scrapes. By late September, when hunters begin to see fresh scrapes, it’s a sign bucks are actively looking for receptive does, but the fact is, only a few does are receptive at this time, so competition is great and movements by bucks increase.”

Ruth said cooler weather has a real impact on deer behavior during pre-rut, and the cooler days in late September and early October help put deer on the move.

“Bucks are searching for does, and this large amount of moving makes them vulnerable to hunters who have done their homework and are set up in the right place,” he said.

“As the peak of the rut nears, more and more bucks are staying with the does that are ready to breed, and that often leaves hunters to see fewer bucks moving,” he said. “The last part of September and the early part of October is an excellent time to hunt because bucks are searching for limited numbers of does and are covering a lot of territory. If I could pick and choose a short window of time when I would do a lot of my hunting the pre-rut would be that time period.”

Several factors are important in finding and selecting that perfect tree for an archery stand for deer. Here are some easy to follow tips. […]