If a trophy is a hunter’s goal, buck limits — yours or the state’s — may be the best way to get there. The hunter with a buck in his sights is the ultimate deer manager.

Deer hunting is one of America’s oldest pastimes, having played a major role in the nation’s culture. And it continues today, including the rural boroughs of North Carolina and South Carolina.

Even though hunters help feed their families with every venison recipe on the planet, they invest hours in a deer stand to harvest something special to hang over the fireplace or on walls throughout the house.

Finding a trophy buck can be difficult on some properties and easier on others, but selective harvest can create a more mature age structure and a happy hunter.

What does it take to grow a trophy buck? According to Charles Ruth, the deer-project supervisor for the S.C. Department of Natural Resources, it takes superior nutrition, age and genetics.

White-tailed deer are relatively short-lived creatures, with few living past 51/2 years in the wild. In fact, most only live 18 to 24 months. They are generally considered sexually mature after their first birthday; however, female fawns are known to breed in the late fall and winter at 6 months old when they reach 70 pounds or more. In doe fawns, the minimum weight will trigger sexual maturity.

The bottom line is, deer being short-lived, an extra year of growth can make a measurable impact on the size and quality of bucks in most populations.

Bucks typically reach antler maturity at 41/2 years old. Bucks will make a significant jump in antler growth each year in the three years after their first birthday,

“The reduction in buck harvest in the younger age-classes can have a positive effect on the age structure of bucks,” Ruth said.

Older bucks generally equate to larger-antlered bucks, or at least more-mature bucks, and that is the goal of most hunters. Shifting the age dynamics of bucks in a population must be completed by protecting younger bucks, allowing them to reach older ages. Protecting younger bucks is the goal, accomplished by either antler restrictions or a conservative bag limit.

Antler restrictions alone can have its challenges when it comes to implementation and enforcement. Most are based on the number of points on one side and/or a minimum width requirement. Making these field judgements can be difficult, especially when they are being made in low-light conditions or when deer are moving at a high rate of speed, but antler restrictions can be effective because they often protect younger bucks.

A more practical approach to improving the age structure may be limiting buck harvests; that allows more bucks to enter older age classes by default. This has been successfully done in other jurisdictions around the nation.

“Kentucky has a one-buck limit and has been setting the world on fire with quality bucks for many years, and Kentucky hunters seem to support the limit, because it has not changed since inception,” Ruth said.

Other states have adopted a blended approach, including antler restrictions and conservative buck-harvest limits.

“Knowing what I know about the deer and hunter ‘matrix’ in South Carolina, I believe that a two-buck limit, with one buck having an antler restriction, would work wonders,” Ruth said. “This is the approach that Georgia takes. Georgia only allows two antlered bucks, where one has antler restrictions and the other doesn’t.”

The Georgia Department of Natural Resources allows hunters to tag 12 deer every season; up to 10 may be antlerless, and no more than two may be antlered. One antlered deer must have at least four points at least an inch or longer on one side.

Implementation may have its challenges, especially in South Carolina, where a liberal limit has historically allowed for many bucks to be legally harvested. Today, South Carolina’s buck limit is five per season, but enforcement protocols leave much to be desired.

In North Carolina, a two-buck limit has been in effect for 20 years across half of the state. Two years ago, the other half had its buck limit reduced from four to two. Few have challenged it, and if anything, landowners, and hunt-club managers are increasing their own management restrictions to further protect young bucks to grow a more trophy animal.

“The best way for a hunting club to improve their bucks is either setting rack size limits or age limits,” Pegg said. “In my opinion, the best way to improve bucks on your property is to just let them reach maturity.”

Pegg started out hunting as a teen, like most hunters,  shooting smaller deer at the first opportunity. When he was 16, he shot a 10-point, 151-inch buck behind his house. Ever since, he has been hooked on trying to grow and take only bigger deer.

“I start managing the bucks on my properties since day one of gaining permission,” he said. “I don’t think it takes but a year or two to have some potential shooters around if you are willing to let some nice buck go.”

Should I shoot this one?

Deer management is something wildlife officials discuss on a routine basis. Foremost, they want to sustain a healthy deer population, but it also never hurts to implement some specific restrictions to make the hunter’s success more fulfilling.

On a local level, however, hunters will make decisions on when to select a deer for harvest, depending on the size and characteristics of the animal itself. Sometimes, deer are selected for harvest for other reasons, such as a cull deer or a deer that hunters fear will be shot on an adjoining property.

Since hunters can shoot two bucks in North Carolina and five in South Carolina, they must decide what to do when a buck steps out in range. Of course, if a true wall-hanger walks out, making the decision to shoot or pass is not really part of the process. If a so-called “cull buck” walks out or a borderline buck shows up, hunters need to make the right decision to shoot or not to shoot.

So what is a cull buck? It’s what someone subjectively labels as a deer that should be removed from the herd. Typically, they have unwanted antler characteristics or something that is undesirable in the gene pool. But is it right to select these deer for harvest when the future for these deer is undetermined?

Tory Pegg, a North Carolina hunter who took the state’s biggest-ever non-typical by bow last season, watches the deer on his hunting properties like a hawk, with remote trail cameras and tons of hours in the stand. Pegg doesn’t generally endorse shooting culls.

“Many people will see a ‘messed-up’ younger buck and shoot him, thinking he’ll pass on bad genes,” Pegg said. “In some instances, this may be true, but I’ve also seen so many occasions that buck coming back the next year perfectly normal. I also have never seen the same genetic pattern of these deer with supposedly ‘messed-up’ antlers carried on to future generations in the deer we follow year to year.”

Pegg thinks hunters must give these deer a chance to grow to maturity. It’s hard to know what a deer will become the next year. A lot of things go into antler growth, and another year can do wonders, even when the outlook seems grim.

A deer being shot by hunting neighbors is a common reason that a hunter selects a buck that’s less than mature. If Pegg operated under that way of thinking, he would finish his limit in bow season every year.

“All of my properties are under 8 acres, and I have people hunting all around me,” he said. “I can’t believe in ‘my-neighbor-might-shoot-him’ logic, or I would shoot every buck I saw, because I know these deer spend just as much time off my properties as on them.”

A deer labeled for harvest as a cull buck or because he might be killed by a neighbor will never become a mature buck when he is dead and at the deer processor.

“At the end of the day, shoot what makes you happy. But if you want to shoot big bucks, just let them grow,” Pegg said.

When Scott Osborne was the N.C. Wildlife Resources Commission’s top deer biologist, the Commission in 2000 reduced the buck limit from four to two in the western half of the state. 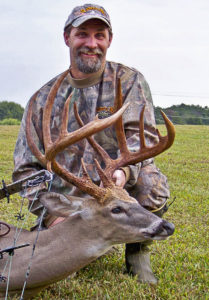 Osborne predicted that areas affected by the two-buck rule would see a decline in the number of antlered bucks harvested of around 12% to 14%.

Harvest data and details from hunter mail surveys indicated that only 12% of all deer hunters in North Carolina killed more than one buck per year. A two-buck rule, Osborne said, would effectively become a one-buck limit for many hunters, who would be very careful about how they used their second and last buck tag. After all, what hunter wanted to be in the woods without a buck tag when an animal resembling Bullwinkle showed up, in range, the last few days of the season?

Osborne was prophetic. The first year the two-buck rule was in place, the buck harvest in the affected areas was down almost exactly what he had predicted, and it remained consistent for years.

Another result of the two-buck rule was the emergence of a handful of counties in the state’s northern Piedmont area as big-buck havens. With more 1½-year-old bucks surviving to grow a second set of antlers — they had previously made up between 75% to 85% of the antlered-buck harvest — more made it 31/2 or 41/2 years and grew impressive racks. 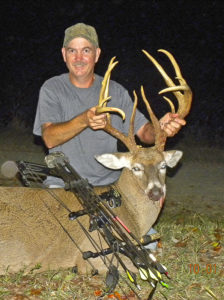 Counties like Stokes, Rockingham and Guilford started to spit out huge bucks, including a number of Boone & Crockett Club trophies.

After nearly 30 years in the archery industry, I’ve had the pleasure of shooting thousands of bows of nearly every make and model: compounds, crossbows and even traditional bows. So it’s rare these days that I am surprised by how well a particular bow shoots. […]

The folks at Daiwa have brought out a new line of spinning reels with the budget-conscious fisherman in mind. […]

About Jeff Burleson 1413 Articles
Jeff Burleson is a native of Lumberton, N.C., who lives in Myrtle Beach, S.C. He graduated from N.C. State University with a degree in fisheries and wildlife sciences and is a certified biologist and professional forester for Southern Palmetto Environmental Consulting.