November redfish in the Carolinas can be caught on three basic patterns, so spool on some line and catch them before the turkey is all gone.

November represents a transition for many saltwater species along the coasts of both Carolinas. While some migrate from shallow to deeper waters, other species migrate back to the ocean, even out to Gulf stream waters, not to be seen until next spring. Red drum represents a little of both when it comes to fall migrations.

During November, redfish of different ages and sizes can be found in two or three primary patterns. Guide Stephen Fields of Charleston (S.C.) Fishing Company travels the southeast giving seminars on the use of state-of- the-art mapping software when he’s not fishing or guiding. He said the size of the redfish you’re targeting will dictate where you need to be fishing and what you need to have tied on.

If you fish inshore, November begins the basic, shallow-water, sight-fishing pattern for redfish that fit in, just over and under the slot limit. As waters begin to cool and clear, Fields will start taking his clients to areas where the water may only be covering the backs of the fish by a few inches. 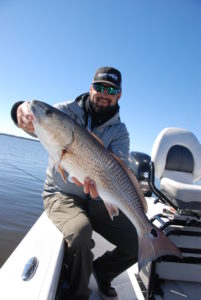 “This month, the bait will start thinning out, and redfish will school up, which helps them work on the collections of mud minnows and other small baits that will still be available in the creeks,” said Fields (charlestonfishingcompany.com). “It’s also time for them to get spooky, because dolphins also move from chasing baitfish to chasing redfish for food.”

Fields targets redfish on shallow flats, but he looks for flats adjacent to deep water. He doesn’t immediately head for skinny water, having too-often passed over schools holding in the 3 to 4 foot of water just outside the shallow flats.

“I prefer to start deep and work my way in,” he said. “I’m really going to key in on (areas) with 3 to 4 feet of water along the edge of skinny water.”

When he’s fishing by himself or with experienced anglers, Fields uses artificial lures exclusively. He will downsize his lure choices and suggests anything that mimics a 3- to 4-inch baitfish or shrimp will get more bites than using the bigger artificials anglers have used all summer and fall.

He rigs soft plastics on a weedless jighead, anything from a standard Texas rig to a shaky head to one of the newer saltwater-style jigheads that mimic bass-fishing tackle.

“I use more-conventional bass tackle in the winter than I do any other time of the year,” he said. “I’m fishing shallow water, and I still like the weedless aspects, because I’m going to be casting into and around structure which might include shell, rocks or grass.”

When fishing with clients or if the bite gets really tough, Fields will make sure he has some mud minnows on board. He rigs them under a popping cork or on a lightweight Carolina rig to ride just off the bottom.

“What you don’t want is for the mud minnow to dig into the bottom and hide, which they do very well,” he said. “I either want the bait to ride up off the bottom and flow with the current or I want to work the Carolina rig so the bait is moving.”

For bigger redfish, the adults that measure over the slot limit, Fields heads for the nearest inlet and fishes any rocks or jetties that line the inlet or looks for adult redfish to start to school up off the beaches just outside the surf line.

“If they’re off the beaches, just look for birds,” he said. “The bulls will be out there chasing the last of the bigger mullet.”

While he may still be anchoring to soak cut mullet and waiting for adult redfish to move through inlets and jetties, he’s going to be actively following the schools off the beach.

“Move with the schools and cast big artificial baits: big plastics and casting spoons. I like the larger Z-Man Streakz or something like a Thury Super Natural Big Bait or a 10-inch Headlock casting spoon.”

Another November pattern is to head for nearshore reefs and wrecks and vertically jig for adult redfish. Fields said it’s not unusual to find smaller fish on nearshore wrecks but warns that anything outside the 3-mile line is Federal waters, where all redfish must be released.

“For vertical fishing over a wreck or reef, I’ll tie on a big jigging spoon or a standard white bucktail,” said Fields. “One of the hottest jigging spoons last season was the Colt Sniper jigging spoon. It looks like a lot of the other jigging spoons on the market but this one has been catching a lot of fish.”

Rather than stuffing yourself on Thanksgiving turkey and plopping down on the couch to watch the game, this holiday season, it might be worth your while to tie on your favorite lure and head out to do battle with some redfish.

How to stack up hogs by finding food sources

Finding the right food sources is the key to stacking up hogs like cordwood. June in the Carolinas means wheat fields. But a few other sources are also good bets. […]

Sewage was discharged into Lake Wylie from a private septic system, prompting alerts for swimmers and anglers. […]

About Phillip Gentry 763 Articles
Phillip Gentry of Greenville, S.C., is host of “Upstate Outdoors,” a weekly radio show that can be heard on Saturdays at noon on WORD 106.3 FM.