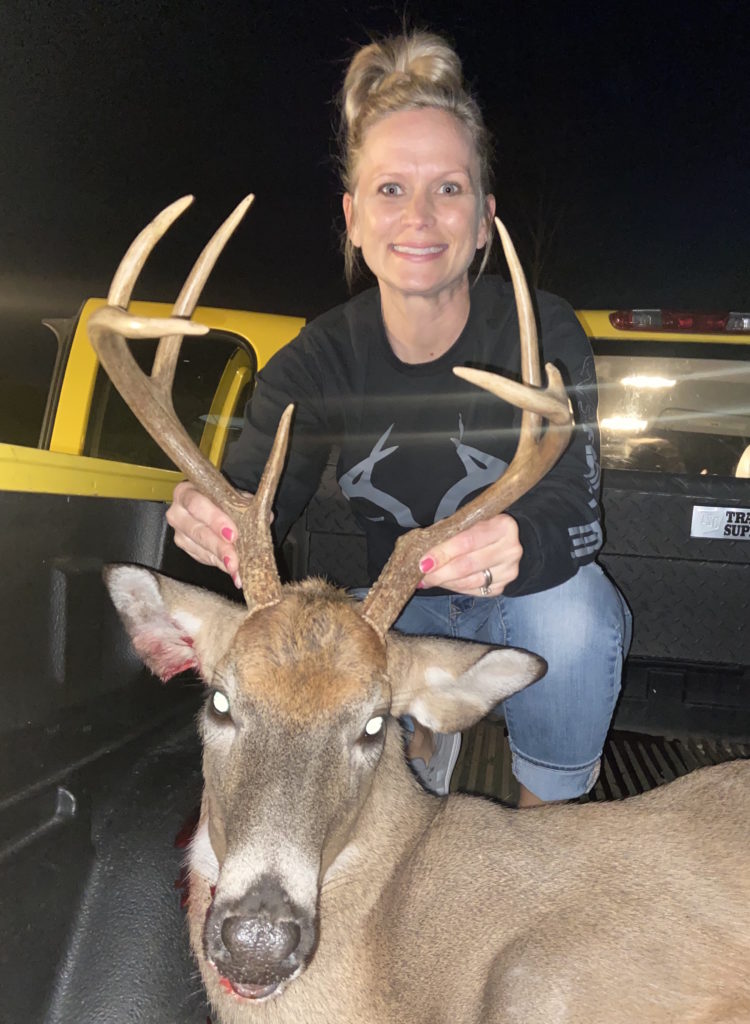 Alisha Ricketts of Gibsonville, N.C. killed a great buck on the afternoon of Dec. 22, 2020 in Rockingham County. The buck was a regular trail cam visitor, but was elusive in the flesh until that afternoon.

“The deer has been a regular on camera, but never happened to show up while I was in the stand,” she said.

But Ricketts stayed at it, encouraged by her husband who told her the timing would work out soon. And she was in the stand when the buck, the first one she has targeted without anyone else’s help, finally made its timely appearance.

“My husband had been encouraging me for weeks that it would happen eventually. And things finally came together,” she said.

She saw several deer during the hunt

Ricketts was hunting near a corn pile around 5 p.m., and saw numerous deer before her target buck showed up.

“I had seen several deer throughout the afternoon but had a large lone doe come to the corn pile. A few minutes later, I heard a deer coming down off the ridge in front of me. The doe took off as he got closer,” she said.

Fearing the big buck would run off quickly, Ricketts wasted no time getting the deer in her crosshairs.

“I was worried he would leave before I got a shot. But I found an opening on the trail he was on and squeezed the trigger as he stepped into it. A short blood trail led us right to him. We celebrated as a family right there in the woods. This is the first buck I have hunted and harvested all by myself, and I am thrilled with him,” she said.

Congratulations to Ricketts, who is now entered in our Bag-A-Buck contest. This makes her eligible for a number of great prizes. That includes the grand prize, a two-day, two-man hunt at Cherokee Run Hunting Lodge. Click here to view the Bag-A-Buck gallery or to enter the contest yourself.