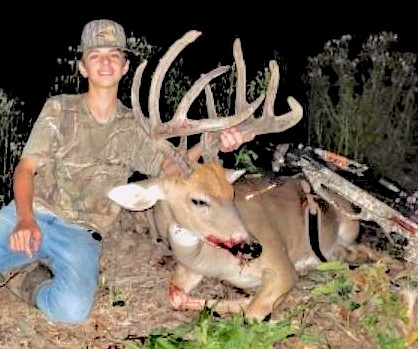 Chris Glosson, 16-years-old from Rougemont, N.C., killed a huge Granville County buck on Sept. 15. He used a Parker crossbow to drill the 5×5 that’s been green-scored at 154 3/8 inches. And the antlers were covered in velvet.

It’s the best buck of the young hunter’s career so far. And it’s not a buck he had a very long history with.

But this past summer, a trail camera snapped a photo of the high-tined whitetail. A second camera took another digital image several weeks later. In that photo, two bucks accompanied the older deer.

“The three bucks hung out together for a while. But the other two left him,” said the youngster.

Glosson, a junior at Granville Central High School, is climbing the rungs of deer hunting’s ladder. He dropped his first deer when he was 5-years-old. And unlike almost anyone his age, he records his experiences. By the time he was 15, the teen was videoing his hunts, plus buck activities during the pre-rut and rut.

After scattering some corn about 20 yards from his ground blind at lunchtime, Glosson was back to hunt at 5:15 p.m. He’d added some Monster Mix to the corn. The summer’s heat had given way to the first cool fall weather. And that had the bucks on the move.

Numerous deer showed up before the buck. And soon, the other deer were eating the corn and Monster Mix. By now, the Granville County buck was on scene, but stayed in the background.

Glosson’s bolt hit the deer through both lungs

“One time, he walked forward and shoved a smaller buck. Then he walked off again,” he said. “He seemed to be keeping watch. A couple of deer left, and he eased back to the corn and put down his nose.”

Dressed in full camo clothing doused in Scent Killer spray, the young hunter got ready. He used a bi-pod rifle rest to help steady the crossbow. Still, when the buck walked within 15 yards of the stand at 7:30 p.m., Glosson got shaky.

“I was breathing hard after seeing him come out,” he said. “I also was filming, but I had to get the crossbow aligned too. Everything happened pretty quick.”

With his crossbow, he zipped a 260-feet-per-second bolt tipped with a Rage two-blade, 100-grain expandable broadhead into the deer’s left side.

“It was a double-lung hit. But the arrow’s fletching stopped at his opposite rib cage. When the bolt hit him, he jumped, kicked, and the arrow fell out,” he said.

The deer ran about 70 yards, then crashed in a cutover. Now it was time to track the buck. He called in reinforcements, and in short order, they located the deer.

“I want to thank the Morris families, Scottie and Kevin, their wives, and son for helping me track this deer and drag him out of the cutover,” he said.

Congratulations to Glosson, who is now entered in our Bag-A-Buck contest, making him eligible for a number of great prizes, including the grand prize which includes a 2-day, two-man hunt at Cherokee Run Hunting Lodge. Click here to view the Bag-A-Buck gallery or to enter the contest yourself.

Wesley Thomas of Hillsbourough, N.C. was rabbit hunting last year when he got his first clue of the Person County trophy nontypical buck that he killed in late September 2020. […]

September 26, 2020 was youth hunting day and also happened to be Lakyn Dodson’s thirteenth birthday. Lakyn and her uncle had seen a nice buck on their cam which Lakyn decided to name “Todd”. Lakyn […]