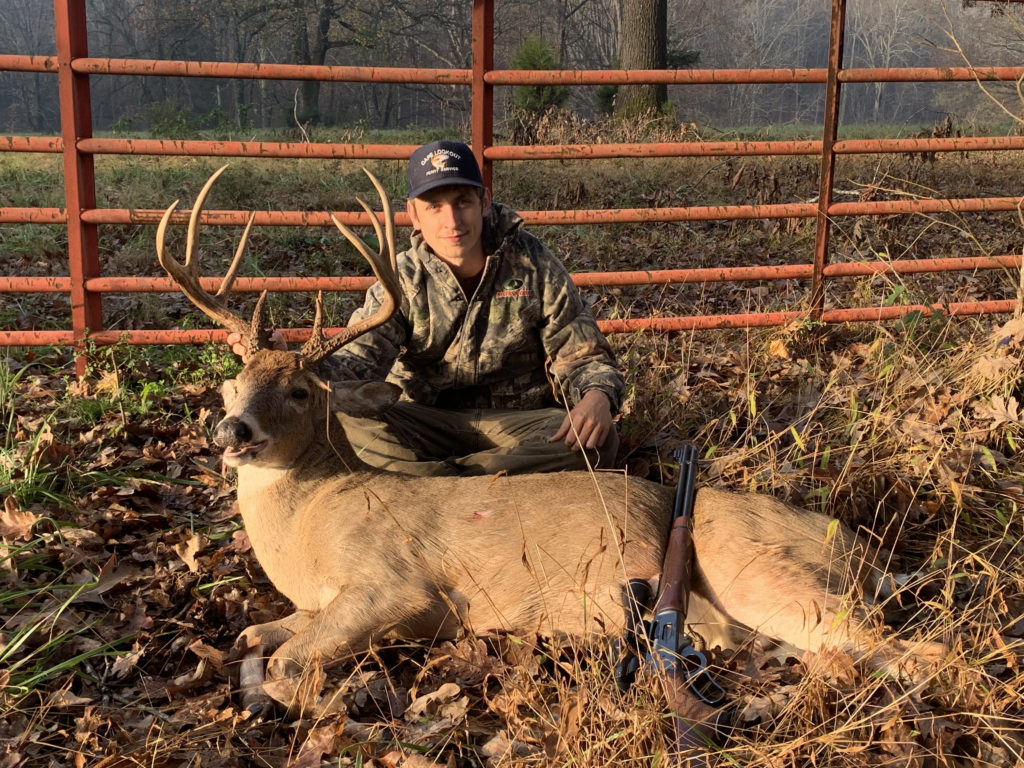 Allen Smith of Reidsville, N.C. dropped a great deer, a main-frame Rockingham County 9-point buck estimated around 140 inches. He shot the deer with a double-lung shot from his scoped .30-30 Marlin on Nov. 14.

It was a fitting day to use that rifle. It was the 125th birthday of the .30-30, the first small-bore, sporting rifle cartridge ever released. This rifle has taken countless bucks in the hands of outdoorsmen.

It was opening day of rifle season in Smith’s Rockingham County turf. He was sitting in a double-ladder stand along the edge of a big cornfield when he had the second of back-to-back encounters with the buck. The first, on Friday evening — the last day of blackpowder season — Smith saw the buck step out of the woods into the cornfield, 600 yards away. After he got down from his stand, he made a mock scrape along the edge of the woods. And the next morning, he was back in the stand.

At 7 a.m., Smith saw the buck step out again. This time, 400 yards away, and with a doe. Guessing the buck would never leave the doe’s side, Smith gambled and made two snort-wheeze calls with his mouth. And here came the buck.

“He had the doe with him,” said Smith. “He went back in the woods about 10 feet, and he walked in the whole way. The doe stayed out in the field and was grazing her way along. I think he was looking for another buck.”

Finally, the buck walked out of the woods at 60 yards, ready to walk across the corner of the field and into an adjacent cow pasture. But not before giving Smith a broadside shot.

The little lever-action cracked, the buck kicked and took off.

Smith stayed in his stand for about 15 minutes, then followed up his shot. Not far away, he looked up and saw the buck. It was lying down upright, against a tree, very much alive. The buck stood and left. Smith waited another 15 minutes before heading for the spot it had been lying down. That’s when he discovered a “paint trail” of blood pouring from the buck. And about 20 yards later, he found him dead.

Smith’s buck, estimated at 215 pounds, carried a beautiful, tall rack with split brow tines, an inside spread of between 18 and 19 inches, multiple tines approaching 10 inches, and two sticker points off the left base.

Congratulations to Smith, who is now entered in our Bag-A-Buck contest, making him eligible for a number of great prizes. That includes the grand prize, a two-day, two-man hunt at Cherokee Run Hunting Lodge. Click here to view the Bag-A-Buck gallery or to enter the contest yourself.

Mark Winfree of Stokesdale, N.C. killed a Rockingham County giant on Oct. 30, 2021 during his first time sitting at that blind. […]

Just harvested this Yadkin County buck this morning, he winded my Tink’s 69 […]