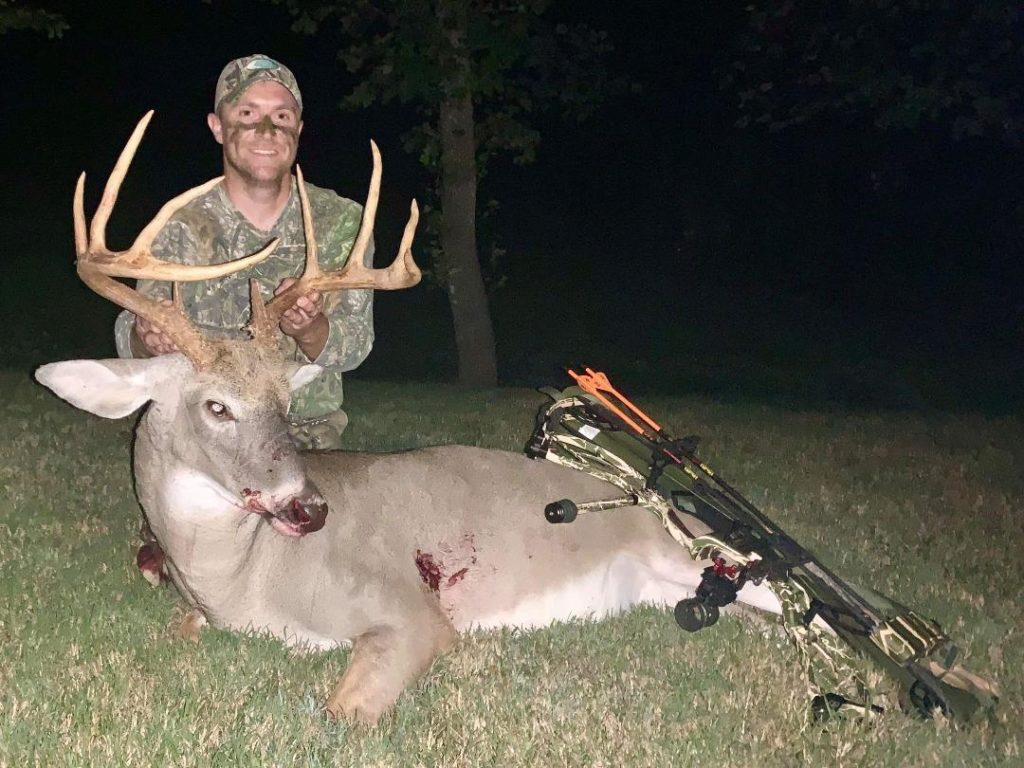 RJ Seiler of Stokesdale, N.C. drilled his first buck of the season, a 142-inch, 10-point buck in a small clover food plot deep in the hills of Rockingham County on the evening of Sept. 15. Seiler’s clover was flourishing shin deep, but the 200-pound brute came with nose-in-the-air. It was sniffing a sweet corn aroma attractant that the hunter just started using during the 2020 season.

For several weeks leading up to opening day, Seiler’s trail cameras captured the massive 10-pointer coming in about every day on his thick, green Imperial Whitetail Clover plot. And it wasn’t the first time he’d seen this deer.

Seiler was surely glad he waited. But that’s typical. Seiler only shoots mature bucks on his farms. So the deer was safe last year on his property. Of course, this year was different, and the deer was lured in to the new aroma Seiler began using.

“I started using a new product made by Happy Herd Nutritions named “Coat All.” It comes in different flavors, but I had the sweet corn flavor. I covered the back end of my food plot with this stuff that afternoon,” he said.

Seiler’s buck had an 18-inch spread

On Tuesday afternoon, he sprayed down an area in his food plot that would be in shooting range. He carried his bow and collection of super-sharp Rage broadheads. At 5 p.m., Seiler got situated and prepared for his afternoon sit. The buck was coming in regularly to his clover. And the conditions that evening were almost perfect.

At 7 p.m., two small bucks came and started eating and sniffing around where he had sprayed the scent attractant. Five minutes later, the two juvenile bucks went on full alert, darting out of the food plot. Seiler knew something was brewing. Now he was on full alert. Then, out of the opposite corner of the clearing, the big 10-pointer entered into the food plot.

“He came across the food plot heading toward me in a steady walk. At 23 yards, I let my arrow fly,” he said.

It was a full pass through, and the buck took off into the distance. After a short wait for help to arrive, Seiler and one of his hunting pals tracked the deer through the woods and to its final resting place about 150 yards from where he’d released his arrow.

For Seiler, the Rockingham County 10-point buck was the perfect start to the 2020 deer season.

Congratulations to Seiler, who is now entered in our Bag-A-Buck contest, making him eligible for a number of great prizes, including the grand prize which includes a 2-day, two-man hunt at Cherokee Run Hunting Lodge. Click here to view the Bag-A-Buck gallery or to enter the contest yourself.

Raven Ginn Polk of Cummings, S.C. killed a big 12-point Hampton County buck on the evening of Sept. 25 while hunting from a tripod stand. […]

About Jeff Burleson 1413 Articles
Jeff Burleson is a native of Lumberton, N.C., who lives in Myrtle Beach, S.C. He graduated from N.C. State University with a degree in fisheries and wildlife sciences and is a certified biologist and professional forester for Southern Palmetto Environmental Consulting.