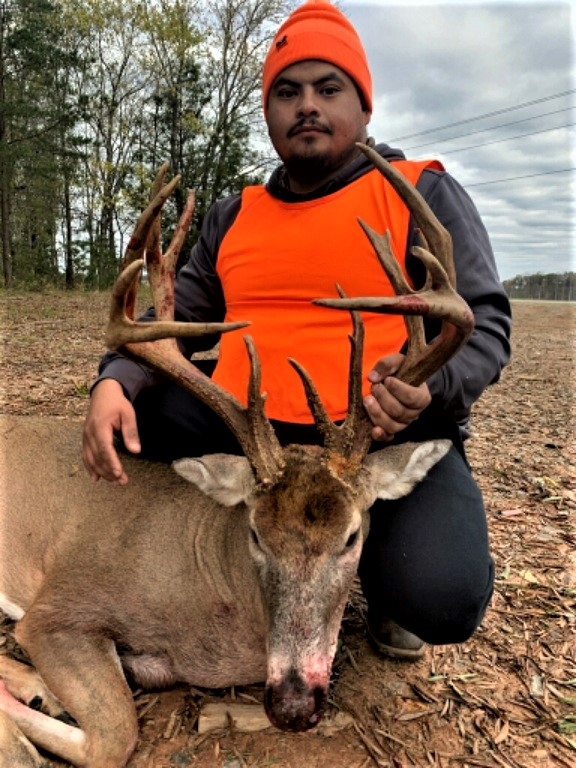 He shot the nontypical 16-point buck with a muzzleloader

Fidel Rodriguez of Kernersville, N.C. killed his biggest deer on Oct. 31, when he shot the Rockingham County nontypical 16-point buck that’s been green-scored at 168 7/8 inches. He killed the deer with a .50-caliber CVA Wolf muzzleloader.

His goal was to take video of his hunt with a camcorder he’d recently bought. But noise was his first concern thanks to the many leaves on his pathway to his stand. He’d used a portable blower to clear the leaves, hoping it would cut down the sounds of crunching leaves on his walk in.

“But I felt like a made a lot of noise that morning,” he said.

Rodriguez climbed up his ladder stand and sat down, waiting for dawn’s early light before trying to secure his camera-holder extension arm. He didn’t anticipate how quickly things would change.

“At daylight, I was attaching the arm when I heard something to my left,” he said. “I froze. But it was squirrels.”

After his heart calmed, he affixed the arm and camcorder. Then he heard leaves scuffling to his right. It was 7:20 a.m.

And this time, it wasn’t squirrels

“I saw the silhouette of a deer coming out of thick saplings,” he said. “I didn’t see antlers until he stepped into the trail I’d just walked.”

When Rodriguez looked through his scope, he saw a rocking-chair set of antlers above two dark eyes staring at him.

“When I saw that white tail up, I thought I’d missed,” he said. “But I could hear him crashing through heavy brush.”

After waiting 30 or 40 minutes, he climbed down and walked to where he thought the buck had stood.

He’d underestimated where he saw the buck. But when he reached the actual spot, blood sign was evident. Then Rodriguez saw the buck’s white belly.

“He probably ran 30 yards after he was hit,” he said. “He’d grown so much from the year before, when I had one trail-camera picture.”

The hunter called friends who loaded the buck on a Ranger UTV. The deer’s live weight was 222 pounds

After Rodriguez posted photos of the 16-pointer on the web, a viewer messaged him that his trail-cam had gotten photos of the same buck.

Congratulations to Rodriguez, who is now entered in our Bag-A-Buck contest, making him eligible for a number of great prizes. That includes the grand prize, a two-day, two-man hunt at Cherokee Run Hunting Lodge. Click here to view the Bag-A-Buck gallery or to enter the contest yourself.

I am a retired professor from NC State University. I currently live in Wake Forest, NC. I often hunt with a group of retired faculty members from NC State and NCCU.  On Nov. 27, 2020, […]

Alisha Ricketts killed a big Rockingham County buck on Dec. 22, 2020. It’s a buck that regularly appeared on trail cam, but was elusive when Ricketts was in the stand. […]

Food plots, cameras, perseverance, and a little bit of luck pays off for 15-year-old Luke Johnson of Asheboro, N.C. It was three years of watching trail cams and year round feeding that finally allowed Luke […]