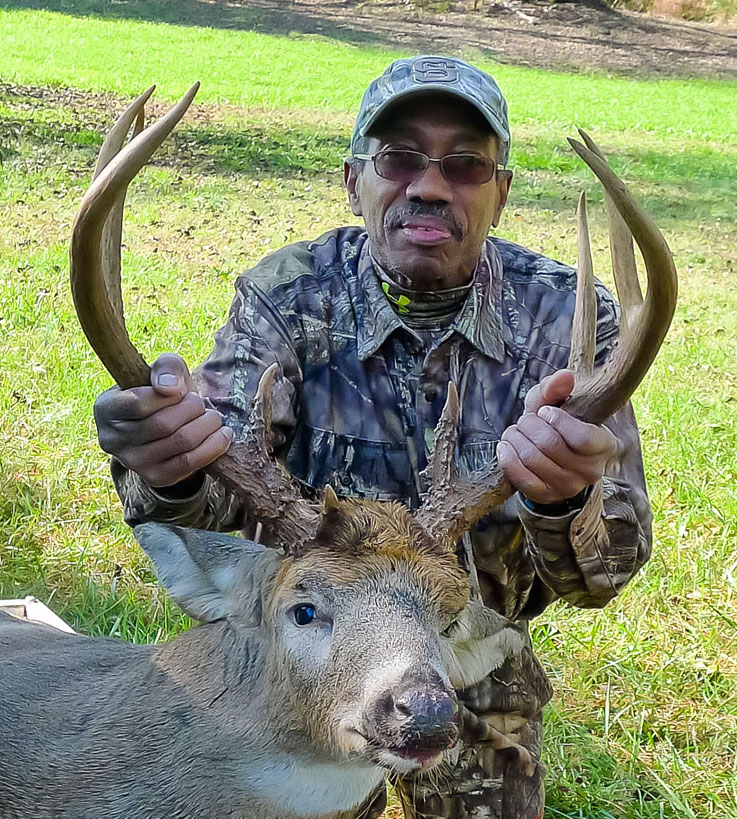 All of Charles Joyner’s hard work on a 42-acre hunting property in Granville County, N.C. paid off this year.

Joyner, a retired N.C. State professor from Wake Forest, N.C. has planted food plots, fixed logging roads and cut roads through a huge cutover on the 42-acre property. He doesn’t want to think about how much money he’s put into making his sweet spot extra sweet.

“That would be some expensive venison,” said Jordan. He was rewarded with a great 8-point buck on his 73rd birthday, Nov. 27, 2020. Then, he was rewarded again, when he entered Carolina Sportsman’s Bag-A-Buck contest on Dec. 30, and was drawn as the winner of the monthly contest on Jan. 1.

Joyner was hunting from a portable turkey blind he’d assembled on top of a couple of levels of construction scaffolding to give himself a commanding view of a big, 3-year-old cutover. The morning of his birthday, he watched several does leave the cutover and cross a road into some big timber. Five minutes later, the huge buck followed. He drilled him with his Browning BAR .270 at about 100 yards.

This was the fourth Bag-A-Buck contest of 2020

“I was surprised he came out,” Joyner said. “I had a trail-cam picture of him from last season, and I had one in a bachelor group back in September. But I hadn’t seen him.”

Joyner is one of six hunters, all retired N.C. State professors, who control the hunting on almost 350 acres in Granville County. Joyner said they’ve cut roads through cutovers, planted food plots, done everything they can to provide benefits for the deer herd.

Every month can bring fantastic fishing in some areas along the coast of the Carolinas for some species, but it will be hard to argue with the No. 1 inshore target in February. […]

Luke Hylton, 6, shot his first deer which was also a buck on Thanksgiving morning 2020 while hunting with his Dad, Sam Hylton, in Randolph County, N.C.

About Dan Kibler 863 Articles
Dan Kibler is managing editor of Carolina Sportsman Magazine. If every fish were a redfish and every big-game animal a wild turkey, he wouldn’t ever complain. His writing and photography skills have earned him numerous awards throughout his career.