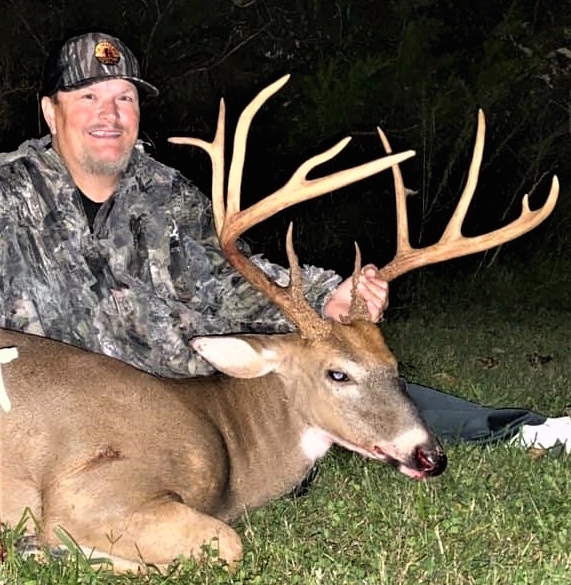 “I started deer hunting in 1989 with a compound bow, used it for years then sorta got out of hunting,” the 49-year-old former maintenance worker said. “I decided two years ago to try crossbow hunting and found an old Barnett.”

But it would be 2020 before he had a chance to pull the weapon’s trigger.

During 2018 Inman was excited after his trail cameras snapped photos of a wide-rack buck with multiple abnormal points.

“I named him ‘Stickers’ because of the points off the sides of his rack,” he said. “I hunted him during the rut and the late season that year.”

Although Inman didn’t get a shot at the deer, he was energized about hunting Stickers in 2019. However, fortune had other plans.

“I didn’t see him at all in 2019 and didn’t have any pictures this year (2020),” Inman said. “I figured another hunter had killed him or he got hit by a car. So I hunted another property. Then a landowner told me he’d seen him.”

Back to the drawing board

Inman placed a trail camera a few days before archery season but didn’t check its SIM card until after he downed the deer (it had several photos of Stickers).

He walked to an old ambush spot at the edge of an untended garden plot behind two blow-down pine trees.

“I had my mind set to hunt this other place where a camera had got some good pictures. But I couldn’t go there because of 4 inches of rain,” he said. “So I went where I saw him two years before, a place with a ground blind spot next to the old food plot. I’d hunted there with a gun but never a bow.”

Twenty yards out into the plot, Inman placed a pile of apples, pears and corn doused in Happy Herd caramel-apple scent spray.

“(The garden plot) butts up against some hardwoods,” he said. “I invented a ground blind of cut cedar limbs and put a chair in there.”

Inman settled down with his crossbow at 6 p.m.

“I had a bad wind, but I’d washed my body and clothes with Scent Away and Dead End Game Calls OdorZone Scent Elimination spray,” he said.

Inman said he still hoped the buck would walk into the field from his right.

“If he stepped out, I didn’t want to move. And if he smelled me, I knew I wouldn’t kill him,” he said. “But he came in straight downwind and didn’t even act spooky. The cover scent worked great. So he had to be smelling the caramel-apple spray.”

At 7:10 p.m. Inman turned on the scope’s red-dot laser. Five minutes later the deer walked out of the woods and to the bait pile.

Inman aimed and squeezed the crossbow’s trigger. It sent a bolt tipped by a NAP Spitfire three-blade expandable broadhead into the 12-pointer’s side. It ran 60 yards into a cutover and fell.

“My concern was to hit him right,” Inman said. “I practiced and had been hitting the 12-ring from any distance. I watched the lighted nock go in his side. I’ve been hunting 30 years but never had an experience like this. It was textbook.”

The long-tine 5×5 had two abnormal points.

“It was my first crossbow buck,” Inman said, “and a thrill.”

Congratulations to Inman, who is now entered in our Bag-A-Buck contest, making him eligible for a number of great prizes, including the grand prize which includes a 2-day, two-man hunt at Cherokee Run Hunting Lodge. Click here to view the Bag-A-Buck gallery or to enter the contest yourself.

A number of deer in Wilkes and Surry counties in North Carolina are currently suffering from Hemorrhagic Disease, but wildlife biologists say the population should recover quickly from the yearly disease. […]