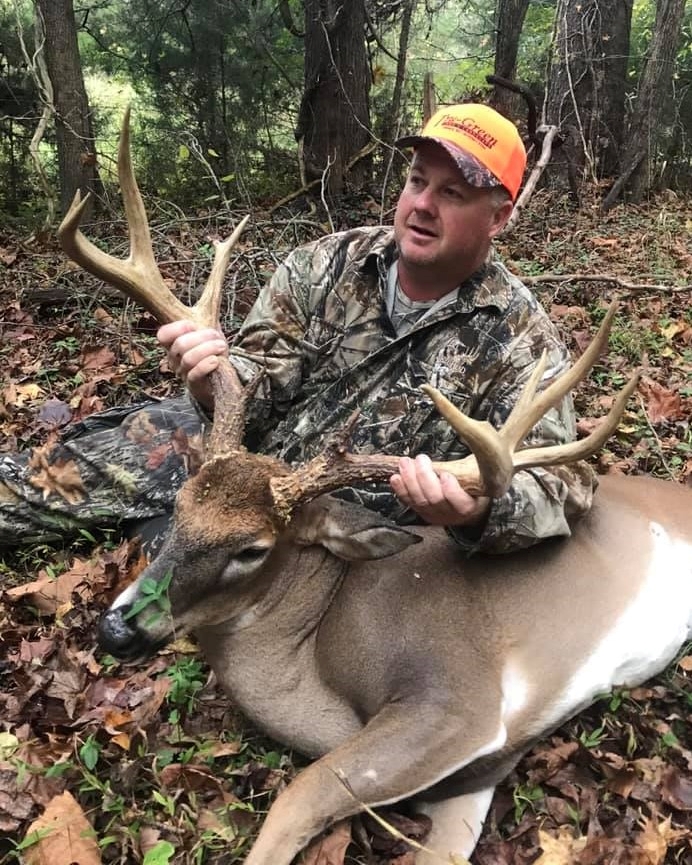 Jones shot the buck from 108 yards away with a Thompson/Center .50-caliber muzzleloader. The deer’s rack has been scored at 152 gross inches, aided by an inside spread of 26 3/8 inches.

“He had some history around (Oxford),” Jones said. “Lots of people had seen him and even had videos. I had a few photos from last year when he was an 8-pointer with one kicker.

“This year, a friend showed me pictures another guy, who was hunting a mile from me, had gotten three weeks before I killed him.

“I found out the buck was on my lease because I had some pictures of him at daylight three days before I shot him.”

Even better, Jones knew the rut was in high gear because he saw the buck chasing a doe Oct. 29.

When he pulled the trigger, Jones was hunting from a box stand, 12 feet off the ground at a grown-over pasture near an abandoned farm house.

“I’ve been leasing that property for 15 years,” he said. “It adjoins a farm I own where I plant food plots. I bush-hogged some shooting lanes in there to leave it as natural as possible.”

On Oct. 27, he’d placed corn and other natural foods on the ground. And a trail cam captured photos of the buck and a doe that night.

“I got in my stand at 6:30 a.m. on a beautiful, fairly clear and cool Halloween morning,” Jones said. “The buck walked down one of the paths and was making scrapes. I’d used cover scent on my hunting clothes. But the wind was in my favor.”

Jones ranged the distance to the buck at 108 yards. He knew he could make the shot, because his Nikon Monarch’s scope was zeroed at 200 yards.

“It shoots 2- or 3-inches high at 100 yards,” he said. “When the smoke cleared, I couldn’t see him. But I could hear him crashing. I had to shoot because he was walking away. So I wasn’t sure I hit him.”

When the hunter walked to where the buck had stood when he pulled the trigger, Jones became uneasy.

“I was panicked a little because I couldn’t find any blood,” he said.

After a search of that area and farther, Jones returned to his first search site.

I walked back 30 or 40 yards toward my stand,” he said. “He’d turned and come toward me (after the shot). When I found him, there wasn’t an exit wound because the bullet had quartered through him, never mushroomed, and hit a front shoulder. But its track got all his vitals.”

Taxidermist Michael Harris of Franklinton estimated the whitetail at 4 1/2-years-old and measured its rack.

“The rack had 11 points and two kicker points off the base,” said Jones, who plans to take the taxidermy mount to Raleigh’s 2021 Dixie Deer Classic during March.

Congratulations to Jones, who is now entered in our Bag-A-Buck contest, making him eligible for a number of great prizes. That includes the grand prize, a two-day, two-man hunt at Cherokee Run Hunting Lodge. Click here to view the Bag-A-Buck gallery or to enter the contest yourself.