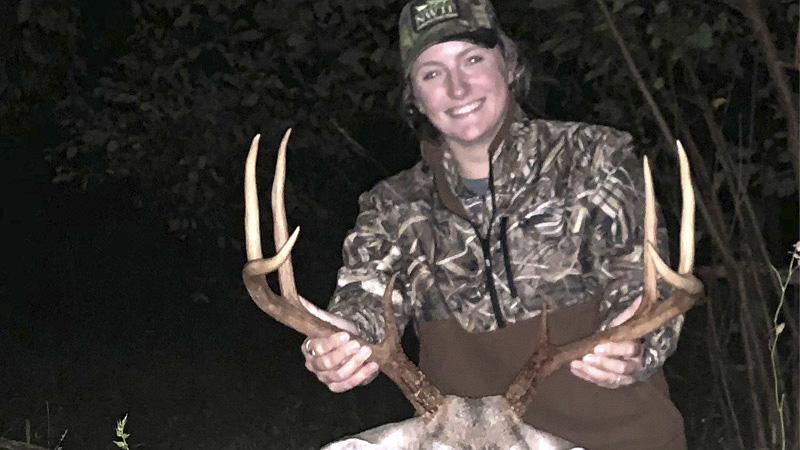 Huntress targeted this buck after seeing it on trail camera

My name is Logan Hodges. I live in Pelham, N.C., and I killed my buck in Rockingham County on Sept. 21, 2020. My hunting plot is a few miles from where I live in Pelham. It was looking good for the start of the season. I only had this buck on camera a few times before the season came in. And once the season finally came in I only had pictures of him at dark.

I had been hunting this deer hard and very consistently. I would rush home from work to get into the stand with my boyfriend, Dylan Willis. On Sept. 21, my boyfriend couldn’t hunt with me, but he told me that it was going to be a good day to hunt. So I rushed home from work and made the hike down to my stand. As I was sitting there watching some does at my corn pile I was thinking about what time I would need to leave the stand to still have some daylight to see to get through the pastures.

I shot the buck at 31 yards with my crossbow

At 7:15 p.m., I heard some rustling about 15 yards to my right in the woods. I caught a glimpse of a massive rack and my heart was instantly beating into my throat. I was thinking about how I could swing my crossbow around to be able to get a shot on him all before he stepped out. And when he stepped out I was in awe at how massive he actually was.

He had me pinpointed when he walked out. And as he walked closer to the corn pile, he walked into a blind spot where he couldn’t see me. So I took my crossbow and got ready. I ranged him at 31 yards and took my shot. He took off running. I knew that I had just shot at the biggest buck I have ever seen while hunting. Then I called my boyfriend and tried to tell him what had just happened, but my nerves were going crazy. I left and went home, where I waited for my boyfriend and two of our close friends. We came back about 2 hours later to find him laying a creek, just as pretty as could be.

Congratulations to Hodges, who is now entered in our Bag-A-Buck contest, making her eligible for a number of great prizes, including the grand prize which includes a 2-day, two-man hunt at Cherokee Run Hunting Lodge. Click here to view the Bag-A-Buck gallery or to enter the contest yourself.

Cayden Currin of Rougemont, N.C. killed a double-beamed trophy buck in Person County on Sept. 18, 2020 during an evening crossbow hunt with his dad. […]