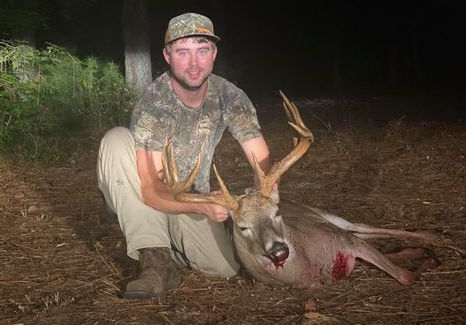 Hunter got photos of 12-point buck while working close by

Cody Tharpe of Holden Beach, N.C. killed a giant Brunswick County 12-point buck on Oct. 22. The beast has been green-scored at 140 inches. It’s a buck he’d been monitoring for about two years, but could never get a daytime shot at it.

Tharpe is a technician for the local phone company, and while on a call to a home less than a mile away from his hunting stand, his trail camera sent him a photo of the big buck. And it was broad daylight.

“I’m at this house trying to fix a lady’s phone and my trail camera goes off and sends me a picture to my phone. And there he is at 9:30, chasing a doe. And this house I’m at is not even a quarter of a mile through the woods to my tree stand,” he said.

Once he’d completed his work at the house, he called his boss on the way to his next stop. He asked to get off around 4 p.m. He got into the tree stand on his granddad’s land at 4:45 with high hopes.

A little more than an hour later, he saw his first signs of action

Tharpe had a feeling that was his target deer. A few more does came out. Then finally, the big buck walked out into the corn pile.

He wanted to raise his rifle at the buck, but he noticed one of the does paying close attention to him.

“There was a mature doe behind the corn pile. And she was looking at me the whole entire time. So I had to real quietly and easily slide up and put my scope on the buck to make sure it was the deer I was wanting,” he said.

Tharpe had to wait on some of the does to move out of the way. It took a few minutes, and once he had a clear shot, he pulled the trigger on his Remington .30-06.

Oct. 19 hunt was a preview of the day he killed the 12-point buck

“He fell right in the corn pile. Then he tried to move again but he couldn’t really go anywhere. He might have made it 10 yards,” he said.

It’s always special to kill a trophy buck. But one thing that made this one even more special for Tharpe is that a few days earlier, his trail camera sent him a photo of an 8-point buck at 9:30 a.m. That evening around 6:30, he killed that buck. And that’s exactly how things played out for him with the 12-pointer.

Another detail that added to the story is that Tharpe’s friend Chris Benton had also been getting photos of this buck. And he’d been putting out feed to keep the deer coming around.

“We had a running joke about who would kill the deer. And when I killed it, he called me telling me how proud he was of me,” he said.

Michael Blackmon at Michael’s Taxidermy in Whiteville is doing a quarter shoulder mount for Tharpe, who hopes it’s completed in time for the Dixie Deer Classic in March.

Congratulations to Tharpe, who is now entered in our Bag-A-Buck contest, making him eligible for a number of great prizes. This includes the grand prize — a 2-day, two-man hunt at Cherokee Run Hunting Lodge. Click here to view the Bag-A-Buck gallery or to enter the contest yourself.

Glen and Linda Halsey, Mollica Hill, NJ holding up one of several red drums they caught while fishing with YEAH RIGHT CHARTERS.

About Brian Cope 1922 Articles
Brian Cope is the editor of CarolinaSportsman.com. He has won numerous awards for his writing, photography, and videography. He is a retired Air Force combat communications technician, and has a B.A. in English Literature from the University of South Carolina. You can reach him at brianc@sportsmannetwork.com.
Website