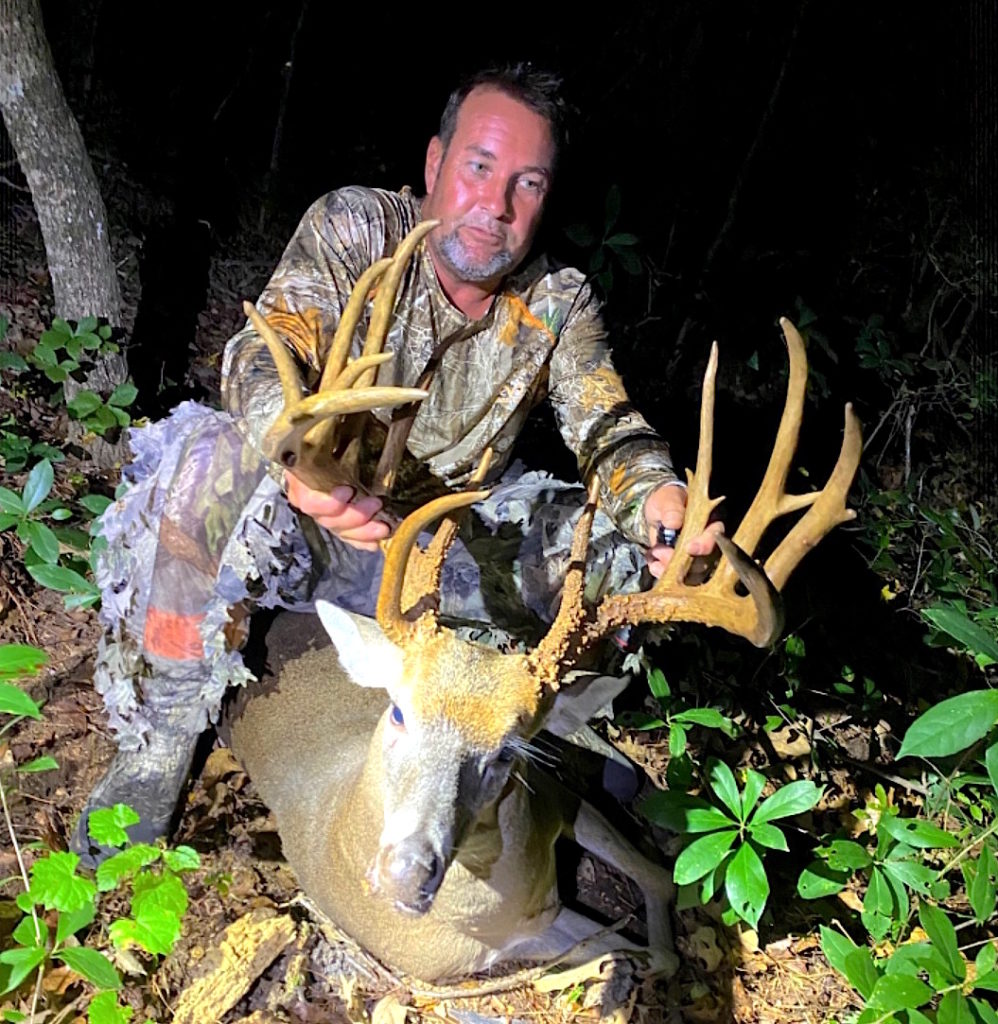 Chris Harden killed an 18-point buck in Moore County on Oct. 9, 2020 that may become the new North Carolina crossbow state record. The deer green-scored as a nontypical at 197 4/8 inches net (200 0/8 inches gross).

The current record for the category is 195 7/8 inches and was arrowed last year by Tracy McCorkle in Mecklenburg County.

Harden shot the buck with a Parker crossbow after getting photos of the deer on his trail camera. He was leaving his hunting property when he checked his camera card, prompting him to stay.

“I couldn’t believe it when I saw the buck walking toward my stand because I’d hunted this area for 14 years and hadn’t seen anything like his rack,” said Harden.

A friend tipped him off that the buck was in the area, but Harden was skeptical.

But after sitting 3 1/2 hours in a tree stand near the edge of a field, Harden began to get uncomfortable and thirsty. So at 5 p.m., he returned to his truck.

18-point buck on his trail cam card changed his mind

Earlier, he’d pulled the SIM card from a trail camera at his bait site. But his card-reader was in his truck. So before he departed for home, he drank a bottle of water, then decided to check the camera’s memory card.

“It had pictures of the buck at the corn pile the previous day,” Harden said. “I threw everything except my crossbow into my truck and went back as fast as I could.”

After reaching his tree stand, 30 minutes passed before deer began to appear.

“It was before the time change, still light enough to see,” he said.

That’s when two does walked to the corn. Then a 7- and 8-pointer chased them away.

“The does started blowing and running around like something was after them. They acted scared. Then I saw horns coming through the woods,” he said.

The monster buck ran the two smaller deer away.

Harden shot the deer from less than 10 yards away

“I thank God his head was behind a tree,” Harden said. “I was going to let him step out. But I looked through my scope and saw his shoulder.”

The buck stood “seven or eight yards” from his tree and ran 50 yards or so after Harden pulled his crossbow’s trigger at 6:58 p.m. Then the deer stopped in its tracks.

“I thought I’d shot under him,” he said. “So I re-cocked — easy with a Parker crossbow — and reloaded.”

Actually, his Bone Collector carbon arrow with a two-blade expandable Swhacker broadhead had passed through the buck. After it walked to a fence and stopped, Harden’s second shot hit the deer’s neck. It ran again, jumped another fence, and disappeared.

Harden waited an hour. Then he and Jimmy Jacobs and Tripp Cox tracked and found the buck, which weighed 162 pounds.

Congratulations to Harden, who is now entered in our Bag-A-Buck contest. This makes him eligible for a number of great prizes. That includes the grand prize, a two-day, two-man hunt at Cherokee Run Hunting Lodge. Click here to view the Bag-A-Buck gallery or to enter the contest yourself.