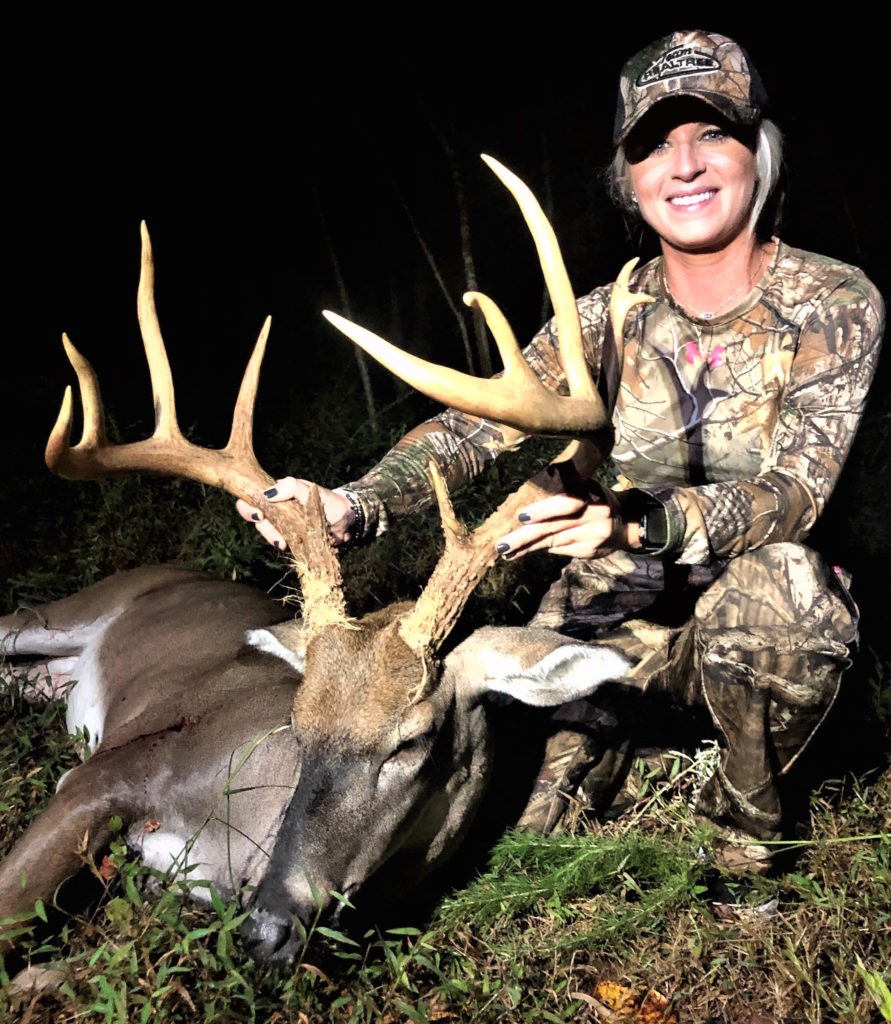 Claire Tucker of Madison, N.C. killed a 12-point nontypical buck in Rockingham County on Sept. 28. The buck has been green-scored at 149 inches. It’s her biggest buck, and the third one she’s killed in three years.

She shot the deer with her TenPoint crossbow from 20 yards away.

“He was 20 yards from the stand the evening I shot him standing in the (bait),” she said.

It wasn’t her first encounter with the 12-point nontypical.

During 2019, she had a fleeting chance to shoot the wide-rack buck.

“It was acting skittish that day when he came into the field,” she said. “I thought ‘maybe the wind’s not right.’ But somebody rode a four-wheeler (alongside the river’s edge) and spooked him. Before that, he’d come close twice, but not close enough to try a shot.”

This offseason, she noticed the deer was still around.

“Trail cameras took pictures of the buck during the summer,” she said.

This fall, Tucker began sprinkling Wright Whitetail Minerals near her enclosed box blind, which sits 10 feet off the ground. The blind is beside a four-acre clover field near the banks of the Dan River.

And on Sept. 28, she finally got another chance at the deer. It was a mild day with a light breeze moving air currents away from the field. She got into the stand at 5:15 p.m.

“Pretty soon, a slew of does, a button buck, and a four-pointer entered the field. And 45 minutes later, the big buck chased them away,” she said.

“He usually came in at the same time. But he missed a few days,” she said. “Then he came back, so I knew his schedule. He was due to show up around 6 p.m.”

And around 6 p.m., Tucker noticed the does looking at the woods to her left.

“I saw the does start looking that way, then I watched him walk toward them,” she said. “It was probably two minutes but seemed like forever.”

The buck chased away the smaller deer. Then he turned to face her stand.

“His right side was quartering away from me,” she said. “I put the crosshairs and the 20-yard sight pin behind his shoulder.”

After she pulled the trigger, Tucker said “I heard that ‘pop’ sound that meant I made a good shot. He jumped and started running the way he came.”

The crossbow’s bolt had split the 12-point nontypical buck’s heart. And its Spitfire mechanical broadhead lodged against an opposite rib.

The deer ran parallel to the field edge, then cut into the woods where it fell just past the woods line 70 yards from her stand.

Tucker’s father Terry Chaney, whom she began archery hunting with at “10- or 11-years-old,” and her husband Joseph Tucker came to help drag the deer out. Her kids joined in the celebration.

“My family was very excited for me when they saw the buck,” she said.

The deer weighed 167 pounds and had a 4×4 mainframe rack with four abnormal points.

Congratulations to Tucker, who is now entered in our Bag-A-Buck contest, making her eligible for a number of great prizes, including the grand prize which includes a 2-day, two-man hunt at Cherokee Run Hunting Lodge. Click here to view the Bag-A-Buck gallery or to enter the contest yourself.

After an 8-point buck gave him the slip, 10-year-old Blake Burgess was happy to see this 9-point buck with shredded velvet show up. […]

Hunter Peeples was hunting with his dad on Aug. 14, 2021 when he killed a 10-point buck in Orangeburg County from the same stand his brother killed an 8-pointer that morning. […]