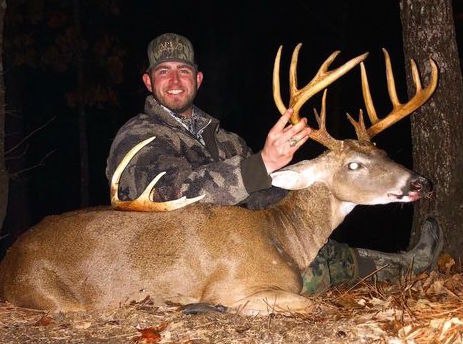 12-pointer has been green-scored in the mid 130s

Clark Henderson of Beaufort, S.C. was hunting a lease in Williamsburg County on Dec. 22, 2020 when he killed his biggest ever buck. Downing the 12-pointer was the end of a two-year chase for Henderson.

“I let the deer walk last year as a 3 1/2-year-old, and shot him this year as a 4 1/2-year-old. I’ve gotten plenty of trail cam pictures of the buck over the past two years,” he said. “We even found his shed from last year while looking for another deer before recovering mine.”

Henderson was hunting from a climbing stand overlooking a power line clearing.

The hunter put his time in on the 12-pointer this season, observing its movements through trail cam photos since late summer.

The 12-pointer was nocturnal for most of the season

The buck, which Henderson nicknamed “Ghost,” spent most of the season in nocturnal mode. But Henderson kept tabs on it, hoping for a late-season change in the deer’s routine.

“I had been hunting this buck very hard, for 113 days, in fact, ever since he popped back up on trail camera in late August. He showed up religiously between 1:30 and 4:30 every night until late December. That’s when he showed up on one of our food plots near the power line minutes before daybreak,” he said.

Once he saw that, Henderson decided to get into the woods every day from then on. It took five days for the buck to offer him a shot, which the hunter took full advantage of.

“I knew it was time to crank the heat up on him, and decided to hunt him every day. Five days later, on Dec. 22, I caught him trailing a hot doe across the power line in good shooting light. He provided me with a perfect broadside shot. He dropped on the spot, and the story of Ghost came to an end right then,” he said.

Congratulations to Henderson, who is now entered in our Bag-A-Buck contest. This makes him eligible for a number of great prizes. That includes the grand prize, a two-day, two-man hunt at Cherokee Run Hunting Lodge. Click here to view the Bag-A-Buck gallery or to enter the contest yourself.