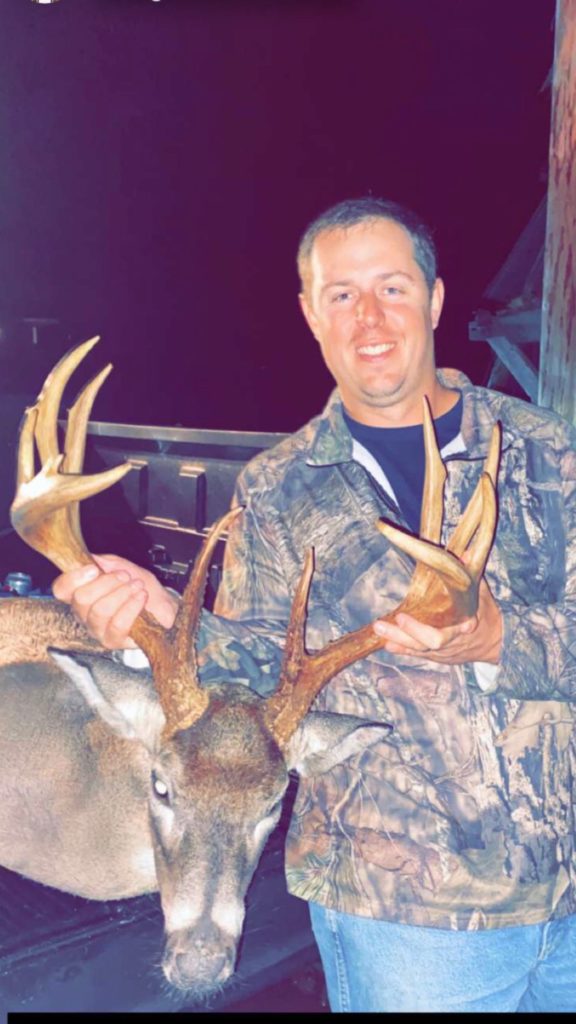 It was November 1. I had not been hunting in about 2 weeks and had not been to this place in over 3 weeks. I was extremely sore due to a soccer game i had played in the day before. I told my wife that I was headed out to this property on a scouting mission and wasn’t shooting anything unless it was huge.

Once out there, I walked down the path to my lock on stand. I put some corn out and went to check my camera. Sometime during the past 3 weeks, my camera had somehow gotten water in it and it was ruined.

I climbed in the stand and was really disappointed about my camera and went back to looking at some older camera pictures from earlier in the year. I had gotten a couple of really nice 8-points on camera several weeks before. I was just hoping for one of them to slip up.

I hadn’t been sitting for an hour yet and it was around 3:55. I was still messing around on my phone when i heard a grunt in the cutover in front of me, then heard deer running.

I stood up and grabbed my rifle. I started scanning and looked 30 yards to my left in some grown up pines. I could make out a deer and could see the top of his tines. I immediately thought it was one of the 8-points. I looked through the scope and the deer started to trot. I pulled the trigger and he kicked and ran about 40 yards and stopped on the overgrown pond dam behind me. I couldnt see him any more and didnt see him come out the other side or crash.

I got down after about 5 minutes to check for blood. As i made my way to the pond damn, I could see him standing there at 25 yards looking at me. I pulled up the rifle and shot again. He stumbled another 15 yards and fell over, but still had his head up looking at me. I ran towards him and stopped at about 20 yards and shot one more time. He started kicking and fell into the pond.

I ran over to him and couldnt believe my eyes. I had never had a picture of this deer. Ive been hunting this property for over 15 years and never seen anything like him.

I counted 11 points!! I immediately called my wife and told her “you know what I said before I left, he’s huge.”

The only problem was he was down the bank at the ponds edge now. I was still so sore from that soccer game, I couldn’t get him out without help. I called a couple of buddies and they had to help me get him out.

We green-scored him at 157.5 inches. My biggest buck to date. Afterwards we took him to Spencer Loftins Taxidermy.

Jared Troublefield took this deer on the Pee Dee Refuge on November 12th. I waited on the rain to ease up with high expectation. There was no history with this deer, as I was on […]

Caleb Flowers killed this 5 pointer November 21st on an afternoon hunt with his dad and cousin using a Savage .243 for a 170 yard shot making this first deer ever. Deer was killed in […]

hyarbrough46@hotmail.com Bag a Buck, Deer of the Year, Hunting Reports

I first got pictures of this buck in Sept. I guess it was him. The buck would not come close enough to the camera to see his horns. But I could tell he was a […]