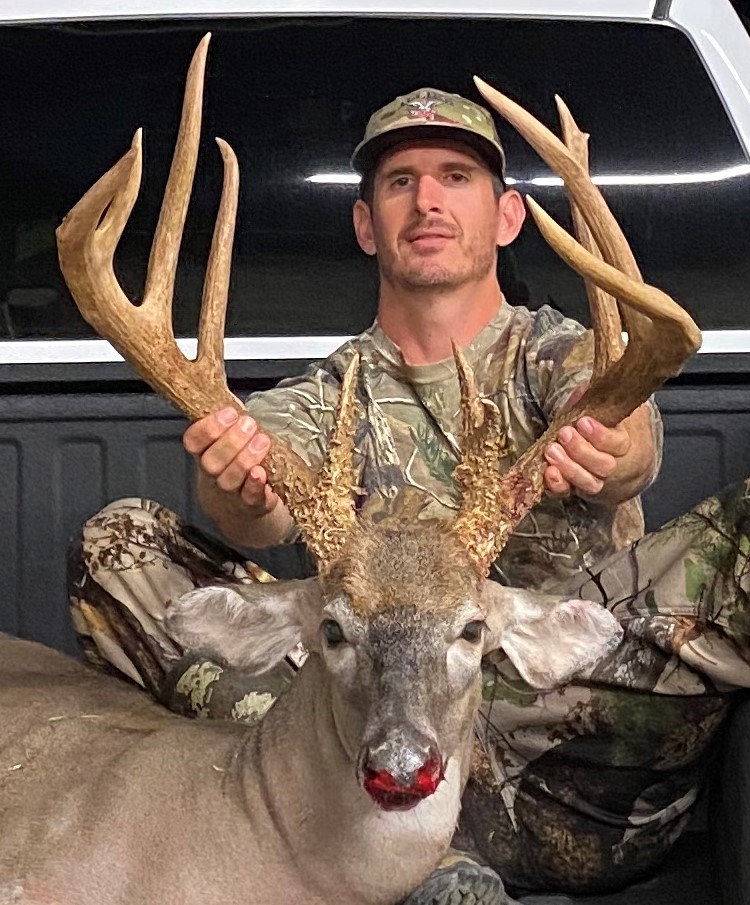 Jeff Sellers killed a giant buck, just outside of Madison, one evening the last week of September 2020, cutting him off between thick bedding and food plot. The buck had lived on the property for 3 years, and Sellers had multiple trail-cam pictures of the deer throughout that time, having an opportunity in 2019 to kill him, but giving him a pass as about a 140″ 10 pointer, hoping that he would make it through the season, and have opportunity to put some size on.

That was easier to do as he had already arrowed a 163″ 11 pointer last September. Sellers always manages his properties carefully, by allowing younger bucks to walk, keeping minerals available year-round, and maintaining quality food plots, as well as using low-pressure practices.

The massive 11 pointer had been showing up on trail cams on a pattern throughout August and the first week of September, heading to Sellers’ plot to feed, but then disappeared 3 days before the archery opener.

Sellers remained patient and allowed his spypoint cell cams to do the scouting for him. Nearly a week after opening day, and after a big weather front moved through, the buck came back, in the middle of the night. Sellers had a feeling that the combination of a good moon phase/major move time, and a drastic temperature drop would get the old buck on the move before dark. He always pays close attention to the weather and moon phase, and won’t hunt if conditions aren’t right.

On the first sit of the season, as the sun was setting, Sellers arrowed the enormous buck at 23 yards, as he was making his way through a transition area toward the plot. The shot felt good, and he thought he heard the deer crash, but it was so thick where he was, he couldn’t see the deer. After recovering the arrow and finding good blood, Sellers backed out and gave the deer about an hour before tracking.

A good buddy, Wade Turmenne came out to help track the deer, but being only 50 yards into the timber, it was a quick track job. Sellers knew the buck was mature, but had no idea how big he was until getting hands on the deer.

Once getting the buck out, the two realized that this buck was something special, having 27-inch main beams, long tines, and 5- to 6-inch mass measurements throughout the beams. Patrick Williams, another giant killer, green scored the deer for Sellers, measuring just over 172 inches of antler.

The deer is currently at Ore’s Taxidermy in Pine Hall, and will be officially scored by the NCWRC once the 60-day drying period is complete. Ore guessed the buck to be 6 to 7-years-old, and added “you just don’t see deer like that around here.”

All of Scarlett’s hard work and many hours lead to this Guilford County, N.C. 131-inch 8-point stud.

It was the opening day of bow season Sept. 14, 2020 in Alamance County. It was also my birthday! My fiance Dustin had gotten a picture of the buck Saturday morning when we woke up […]