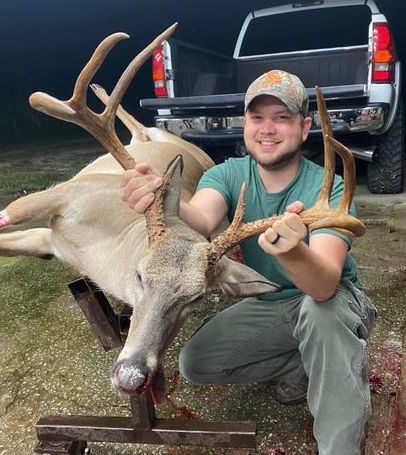 Cody Rhinehart of Orangeburg, S.C. was hunting in Norway when he killed a giant Orangeburg County 8-point buck during an evening hunt on Sept. 6. He had observed the buck through trail camera photos for quite some time before finally getting a shot at it.

He tried starting his weekend hunt on Saturday afternoon, but his farmers showed up to cut the corn. So Rhinehart sat on his porch, wondering how long it would take for deer to come back around after all the ruckus of farm machinery.

“That Sunday morning, I hunted until 8 a.m. but didn’t see anything. So I got down and bush hogged the food plots and lanes until about 1,” he said.

Hoping for an evening hunt, he almost missed out when his dad’s kidney stones prompted a trip to the hospital.

“My dad is my go-to hunting partner. I took him to the hospital for kidney stones, and got home around 6 p.m. I had just enough time to squeeze into the stand. At 7:30 p.m., one doe and two fawns walked out. By 7:45, they left. Then at 7:55, I was glassing the field out of my box stand. I spotted him stepping out of the tree line to my right,” he said.

Realizing it was his target buck, Rhinehart got a little nervous.

“I freaked knowing it was my target buck. I was shaking and so nervous when I pulled the gun up to look and get ready for the shot. But I couldn’t see him at all. I was so rattled, I left my scope cover on,” he said.

He lowered the gun to remove the scope cover and the big buck continued walking. It was 1/4 of the way into the field and walking across.

“He was 125 yards out. I said a quick prayer, took a deep breath, and squeezed the trigger. I saw him buckle somewhat and run off. Then I got down and found a small amount of blood. So I backed off and gave him a good hour to lay. I found him 60 yards in the woods. It was a hunt of a lifetime for me for sure,” he said.

Rhinehart shot the buck with his girlfriend’s Browning 30.06 X-Bolt, which he said has a great scope, as long as you remember to remove the cover.

Rhinehart’s story has been entered in our Bag-A-Buck contest, making him eligible for a number of great prizes, including the grand prize which includes a 2-day, two-man hunt at Cherokee Run Hunting Lodge. Click here to view the Bag-A-Buck gallery or to enter the contest yourself.

About Brian Cope 1648 Articles
Brian Cope is the editor of CarolinaSportsman.com. He has won numerous awards for his writing, photography, and videography. He is a retired Air Force combat communications technician, and has a B.A. in English Literature from the University of South Carolina. You can reach him at brianc@sportsmannetwork.com.
Website