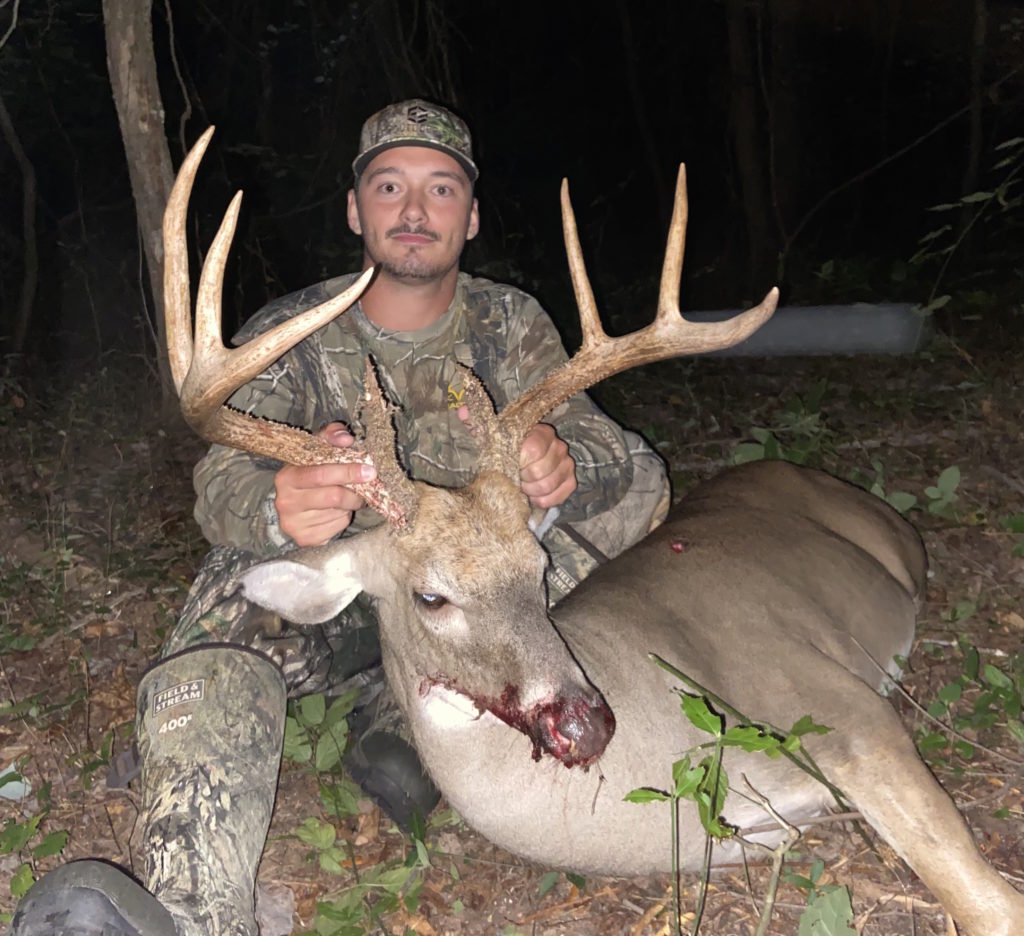 Cameron Brooks of McLeansville, N.C. killed a Guilford County trophy 8-point buck on Sept. 15 while bowhunting from a tree stand. Brooks was quite familiar with the deer thanks to about 2 years of trail camera photos, as well as seeing him in the flesh a few times.

Brooks let the buck walk for the past few seasons, hoping it would reach its full potential. This offseason, his trail cameras helped him identify the buck as soon as its antlers began growing back. He put it on his hit list for the 2020 season, and had a good plan to get the buck.

The buck was on a fairly regular schedule of showing up a few nights in a row, then staying away two or three nights before returning. Brooks felt confident it was just a matter of time as long as he was in the stand each evening.

“He was coming in about three or four nights straight around 7 or 7:30, then he’d go off about two or three days. Then he’d come back. So that’s what his pattern was. I hunted Saturday, Sunday, Monday and Tuesday. He didn’t come in any of the other days. It just happened to be on opening weekend he was gone. So I figured he’d come back,” he said.

The buck had a slight amount of velvet at the base of its antlers. The hunter’s taxidermist green-scored the deer at 133 inches. It’s his first bow kill, and also his biggest deer so far.

Brooks shot the deer with an Elite Ritual bow from about 20 yards away. It was a fairly uneventful hunt, which is often the case when a hunter has a deer patterned as well as Brooks had this one. After sitting in the stand a little less than 2 hours, the deer showed up right on time.

“It was about 7:20 (p.m.) when he walked in. We had a bit of a staring contest when he walked in. Then he got in the corn pile for about 20 seconds and put his head down. I was already standing up ready for him. And I drew back and let it fly about 5 seconds later. He ran about 80 yards,” he said.

Listen to our interview with Brooks on the Sportsman Weekly Podcast

Brooks heard the deer crash after its 80-yard run, but he stayed in the stand about 30 minutes, not wanting to push the buck. Then he got down and found his arrow which was covered in blood. He called fellow hunter Ryan Long to help him recover the deer. A fairly easy blood trail led them about 80 yards to the 8-point buck.

Congratulations to Brooks, who is now entered in our Bag-A-Buck contest, making him eligible for a number of great prizes, including the grand prize which includes a 2-day, two-man hunt at Cherokee Run Hunting Lodge. Click here to view the Bag-A-Buck gallery or to enter the contest yourself.