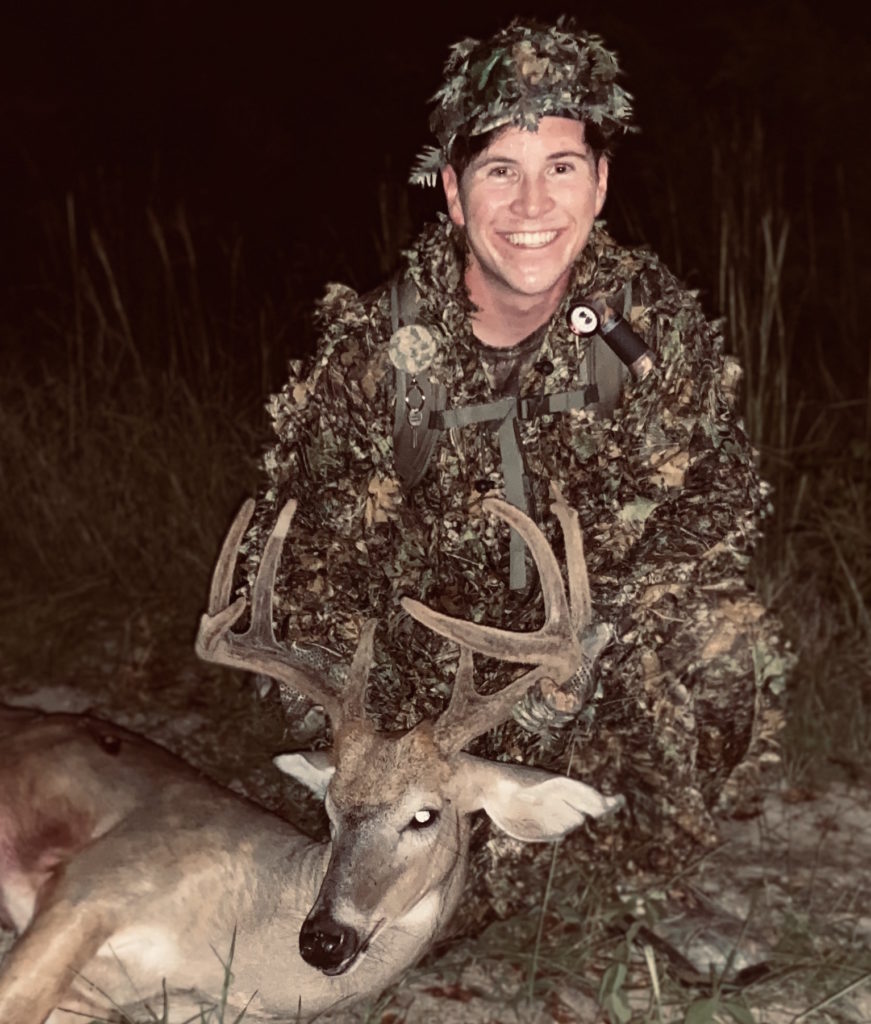 Ryan Carswell of Greenville, N.C. killed a buck in full velvet on Sept. 12, while bowhunting over a soybean field. Here’s his story, in his words, as relayed to us in our hunting reports section…

On the evening of Sept. 12, 2020, I was set up in one of my favorite blinds overlooking a soybean field. On one side of the blind, my father and I baited with Wright Whitetail Mineral Corn to encourage deer to approach within bow range. We had been watching a bachelor group of bucks feed on that corn all season long. I doubted they’d be able to resist the temptation of the bait that evening.

The beginning of the hunt was rather uneventful. Nothing moved until about 7 p.m., when I spotted a rabbit enjoying the corn. I rehearsed ranging the rabbit, and then placing the corresponding crosshair on him.

Little did I know that this rehearsal would prove critical in the moments to come.

While observing the sneaky rabbit, I spotted a small spike entering the corn out of my peripheral. Then, all at once, deer began emerging from the woods and approaching the corn from the soybean field. I watched as at first a doe, then another small buck, and finally a decent-sized buck entered the field.

Immediately, I knew this buck was a shooter. I was lucky enough to watch him be a buck. You know, lift his head up high and scent check, shake bucks away, and watch his antlers sway. He was very cautious entering the corn pile, however.

It took him what seemed like an eternity to feel comfortable enough to enter. When he finally did, I was ready.

So many deer were feeding in such close proximity of each other that I had to be very meticulous when I made my shot. I didn’t want my arrow to pass through him and wound another deer. I didn’t need to range him — I’d already ranged his location to be around 20 yards.

Once he was isolated, I set my 20-yard crosshair behind his shoulder and squeezed the trigger. I knew I hit him. He retraced his steps back into the woods with his back side dropping as he ran.

I texted my father and let him know I just put an arrow in a nice buck. Shockingly, we could find neither the arrow, nor a drop of blood where he was shot. We had to go off of my last sighting. We retraced his steps through the soybeans and where he exited the field. There, we found a few specks of blood.

My father was skeptical, but I knew my shot was true. After walking just a few more feet, we spotted the infamous white belly.

I’m very lucky to have had the opportunity to take this buck. I’m blessed to be able to share the memory of that buck with my dad. I’d never killed a buck in velvet before, and that makes him all the more special.

Congratulations to Carswell, who is now entered in our Bag-A-Buck contest, making him eligible for a number of great prizes. This includes the grand prize — a 2-day, two-man hunt at Cherokee Run Hunting Lodge. Click here to view the Bag-A-Buck gallery or to enter the contest yourself.

Alec Kearns of Wake Forest, N.C. credits being in the right place at the right time for killing this Granville County trophy 16-point buck. […]

All of Scarlett’s hard work and many hours lead to this Guilford County, N.C. 131-inch 8-point stud.

My name is Joshua Mitchell (Age 27 Winnabow, NC) and for my birthday last year my mother gifted me with a 5-day guided hunt with Buffalo Creek Outfitters in Bertie County, NC. On the third […]