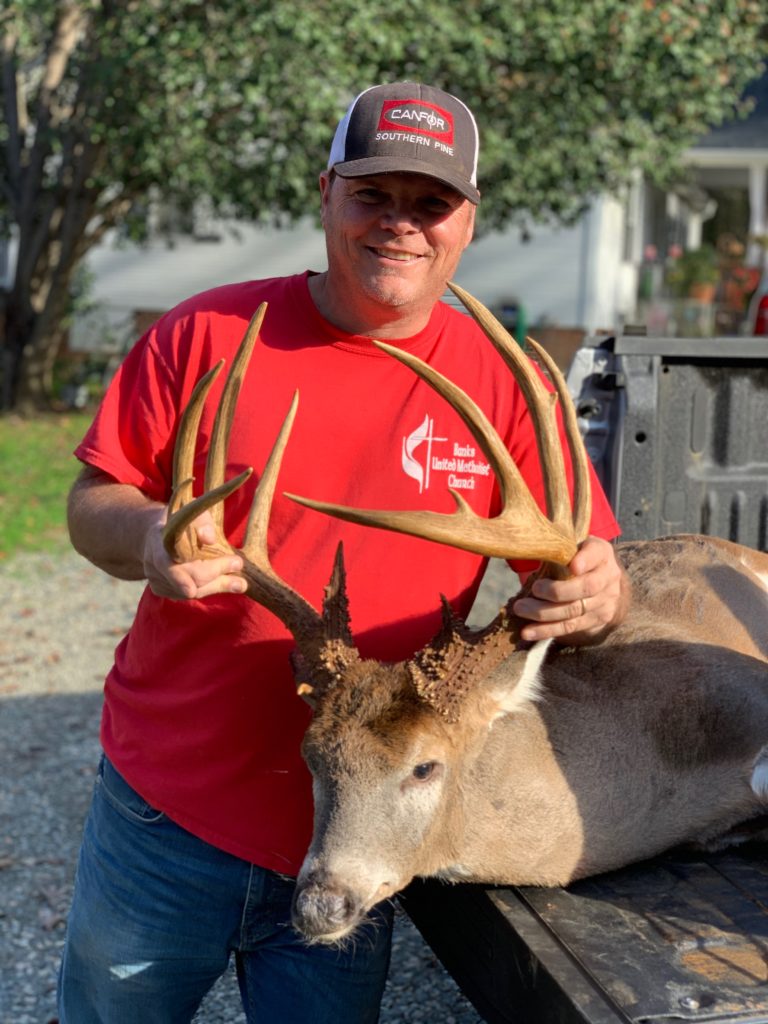 Wake Forest, N.C.’s Alec Kearns killed a huge Granville County 16-point buck on Nov. 14, and he said it’s all due to being in the right place at the right time. It’s hard to argue with that, but it doesn’t mean Kearns didn’t put in the time it takes to deserve such a trophy. He just got it in an unconventional way.

Hunting November’s new moon, Kearns made a mid-morning move to another hunter property. And while perched atop his truck toolbox, he fired off four rounds from his Remington Model 700 .25-06, dropping the huge buck 150 yards away.

“I have been hunting a long time. And I put my time into hunting as much as the next guy. But I killed this deer because I was in the right place at the right time,” said Kearns.

Kearns was hunting on a piece of property he secured three years ago in the northern part of Granville County. He and his hunting buddies have put a lot of time and effort into making the 400+ acre tract a desirable place for trophy bucks to frequent. But so far, they’d never killed a trophy-sized deer, or had any on the property that they were aware of.

“We have put in food plots where we could with milo, ladino clover, and other grains. And we have mowed lanes to make the place attractive,” he said.

Kearns was heading to a stand, but quickly saw an opportunity

That Saturday morning, Kearns was hunting on some other property. But he decided to head up to this tract for a mid-day hunt. It was the middle of the rut, and right on the day of the new moon.

Wanting to sit where he could see a long way, he headed to a stand overlooking a large power line that was adjacent to a two-year-old cutover. Kearns knew he would be able to see a long way. And he thought maybe he’d get lucky and catch a buck running does across the area.

He pulled up to the power line, turned off his truck, and stepped out. Immediately, he heard a familiar sound across the cutover.

“I heard a single dog bark out in the cutover,” he said. “He didn’t bark but just a couple of times. But I knew that he may jump something out there.”

He grabbed his hunting rifle, chambered a round, and stood on top of his truck box. He started looking into the cutover and down the power line.

Almost instantly, Kearns saw movement about 150 yards away. It was a good buck. And he surely was going to try to get a shot at it.

“I shot him, and he disappeared. I kept looking and looking in the brush. But I couldn’t see anything. I was a little nervous to get excited yet. But he was out of sight. I thought I must have gotten him,” he said.

Seconds later, the deer jumped up and started running again toward the power line. Kearns picked shots where he could, and fired off two more rounds. Neither hit their mark, so he began to get a little frustrated. Then the deer ran into the power line, giving Kearns his best look at the deer’s antlers.

“I now see him very good. It wasn’t until now that I realized this was a huge buck. I knew it was a good shooter buck. But holy crap! This is a huge buck,” he said.

Kearns took a few deep breaths to regain his composure. He made one last shot that brought the deer to the ground. The mainframe 10-pointer has 16 scoreable points. The spread is only 15 inches wide, but the mass is incredible. With eight-inch bases, the antlers maintain their mass throughout, with the third and fourth circumference measurements equalling nearly five inches each.

Kearns’ taxidermist green-scored the buck at 187 gross inches — a true trophy that he bagged from being in the right place at the right time.

Congratulations to Kearns, who is now entered in our Bag-A-Buck contest, making him eligible for a number of great prizes. That includes the grand prize, a two-day, two-man hunt at Cherokee Run Hunting Lodge. Click here to view the Bag-A-Buck gallery or to enter the contest yourself.

About Jeff Burleson 1267 Articles
Jeff Burleson is a native of Lumberton, N.C., who lives in Myrtle Beach, S.C. He graduated from N.C. State University with a degree in fisheries and wildlife sciences and is a certified biologist and professional forester for Southern Palmetto Environmental Consulting.