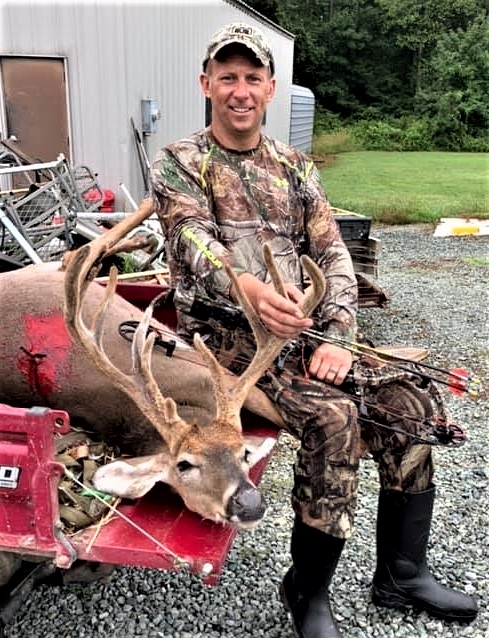 Holt Alcon of Gibsonville, NC killed a 9-point Guilford County buck on Sept. 12 that’s been green-scored at 140 inches. The buck had a split brow tine, and it was in velvet.

Alcon shot the buck with a Mathews compound bow. But without family ties and friendship, he may not have arrowed the buck at all on opening day. His trail cameras didn’t record any preseason photos of the 9-point buck. But his dad, Jerry Alcon, and a neighbor did get digital images of the deer.

“Still, I really didn’t expect to see (the buck) opening day,” said the Jamestown firefighter. “I was just hoping to see a deer.”

A season earlier, the 38-year-old and his dad had found an intriguing spot in a hardwood forest near a creek bottom.

“We found a place while scouting,” the younger Alcon said. “A creek came together with a small branch near a spring in a big open area. It had good sight lines.

“A SpyPoint got pictures of does, fawns, other small deer and one 8-pointer. It seemed like the best (stand) choice (for a good bow shot).”

The final selling point was a trail that led to a nearby food plot and a poplar for the tree stand.

“Deer went to that food plot during daylight hours,” he said.

He figured during hot August and September days and nights, whitetails also would gravitate toward the shady spot with nearby fresh water.

The stand’s platform, atop a 20-foot-tall metal ladder, was secured to a tree.

Rain fell that morning, and clouds delayed daylight, he said. Shooting light became available about 6:40 a.m. He saw a doe and fawn walk to the creek bottom at about 7:20.

“She was acting nervous, looked up a hill to the right, stomped and blew. I don’t know what she saw. I looked and saw a small buck fiddling with a tree limb,” he said.

Once the yearling walked toward the creek, it also got the willies, as if something dangerous were on the hill.

“I knew they didn’t smell me because I was downwind,” Alcon said.

They mystery entity caused the small deer to jump back 3 or 4 yards. And the hunter saw a buck shake its head.

“That’s all I could see of him, and I said ‘Oh, yeah,’” he said. “Everything happened fast. I actually was standing up, sending a Snap Chat video. I had to put the phone in my pocket and pick up my bow. Whatever had their attention up the hill kept them from seeing me in the tree. I didn’t have time to range, but I figured the big one was 20 or 25 yards. I drew the bow. He took one more step, and I let him have it.”

The hunter’s compound bow, set at 70 pounds, sent a Carbon Express Mayhem arrow with a 100-grain Grim Reaper expandable broadhead with a 2 3/4-inch cutting edge to its target.

“The arrow hit high, but got both lungs and came out at the rib cage,” he said. “I saw the (fletchings) bobbing when he ran 60 or 70 yards. Then I heard him fall.”

The main beams of the antlers measured 25 1/2 inches. The bases taped out at 5 inches. All mass circumferences totaled 30 inches.

The fat deer weighed 200 pounds because of its acorn diet. Its rack outstripped Alcon’s previous best buck (an Ohio deer) by 15 inches.

Congratulations to Alcon, who is now entered in our Bag-A-Buck contest, making him eligible for a number of great prizes, including the grand prize which includes a 2-day, two-man hunt at Cherokee Run Hunting Lodge. Click here to view the Bag-A-Buck gallery or to enter the contest yourself.

Hunter Williams let a nice Randolph County 10-point buck walk on multiple occasions in 2019, and his patience paid off with a nice trophy on Sept. 18, 2020. […]

Huntress targeted this buck after seeing it on trail camera My name is Logan Hodges. I live in Pelham, N.C., and I killed my buck in Rockingham County on Sept. 21, 2020. My hunting plot […]