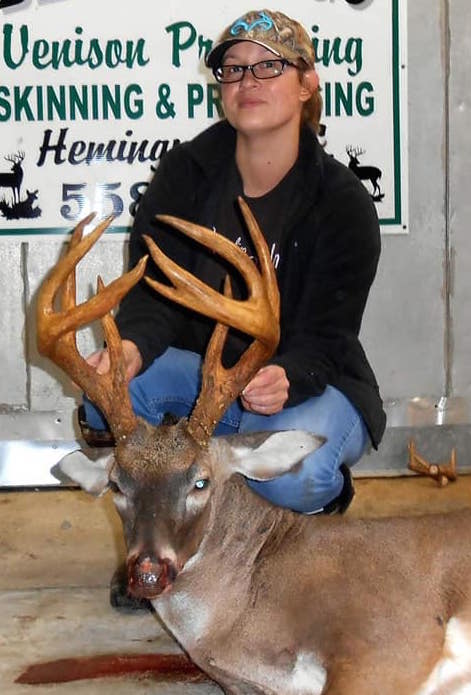 It was her first time taking her son hunting

Erica Poston of Georgetown, S.C. killed a uniquely-racked 9-point buck on Sept. 21 during an evening hunt with her son. It was the first time she’d taken her 6-year-old to the hunting stand.

The buck’s rack was very thick throughout, and the ends of the left side and right side beams were within 1/4 inch from touching each other. She was hunting on a friend’s land in Georgetown County. Family members had shown her numerous deer that their trail cameras had been picking up. But this deer was not in any of those photos. No one had seen the deer in the flesh either.

It was a pleasant surprise for more reasons than one. She was excited to have her son with her, but she knew it presented some challenges for the hunt. Still, Poston thought she had a decent chance at taking a doe.

“My son is 6-years-old, so I know it’s hard for him to sit still. So I didn’t think we needed to get there super early. I figured I could always just shoot a doe,” she said. “We got in there about 5:45 p.m., but then we had to go back to my car to get a cushion for my son to sit on so he could see out of the stand. So it was 6 p.m. by the time we got settled.”

It didn’t take long for her son to see his first bit of deer action, up close and personal. They were sitting in a wooden box stand overlooking a 5-acre corn field that had been disced. Numerous deer passed around them. And close to 7 p.m., some does were in the clearing, eating some corn when they began acting skittish. That’s when the buck walked out.

“As he was walking out of the woods, all I could see was his rack. I knew right away he was a shooter,” she said.

Poston had little time to waste. The deer was a little more than 100 yards away, quartering to her, and offering a shoulder shot. She told her son to cover his ears, took aim with the .300 short magnum, and pulled the trigger. The deer ran off, but she had no doubt she’d made a good shot.

Poston’s mom showed up to help find the buck

Her mom was nearby and called her immediately after she pulled the trigger, asking what she had shot.

“I told her I’d just shot the biggest deer, at least in terms of his rack, that I’ve ever shot. She came to help me look for it. We found some blood right where I’d shot him. But he left us no blood trail from there. But my mom is like a bloodhound. She looked and looked until she found two little specks of blood in the woods. Then she found him. He had run not even 50 yards from where I’d shot him,” she said.

The rack on the 9-point buck was unique in that it was relatively small, but had a great deal of mass. The whole set is extremely thick all the way to the ends.

“It’s basically what most people would call a basket rack. It’s inside the ears. But it just has such a great deal of mass. The antlers are very, very thick,” she said.

Congratulations to Poston, who is now entered in our Bag-A-Buck contest, making her eligible for a number of great prizes, including the grand prize which includes a 2-day, two-man hunt at Cherokee Run Hunting Lodge. Click here to view the Bag-A-Buck gallery or to enter the contest yourself.

Jerry Petree killed a trophy 8-point buck in Forsyth County on Sept. 13, 2020 after watching the buck walk away from him the day before. […]