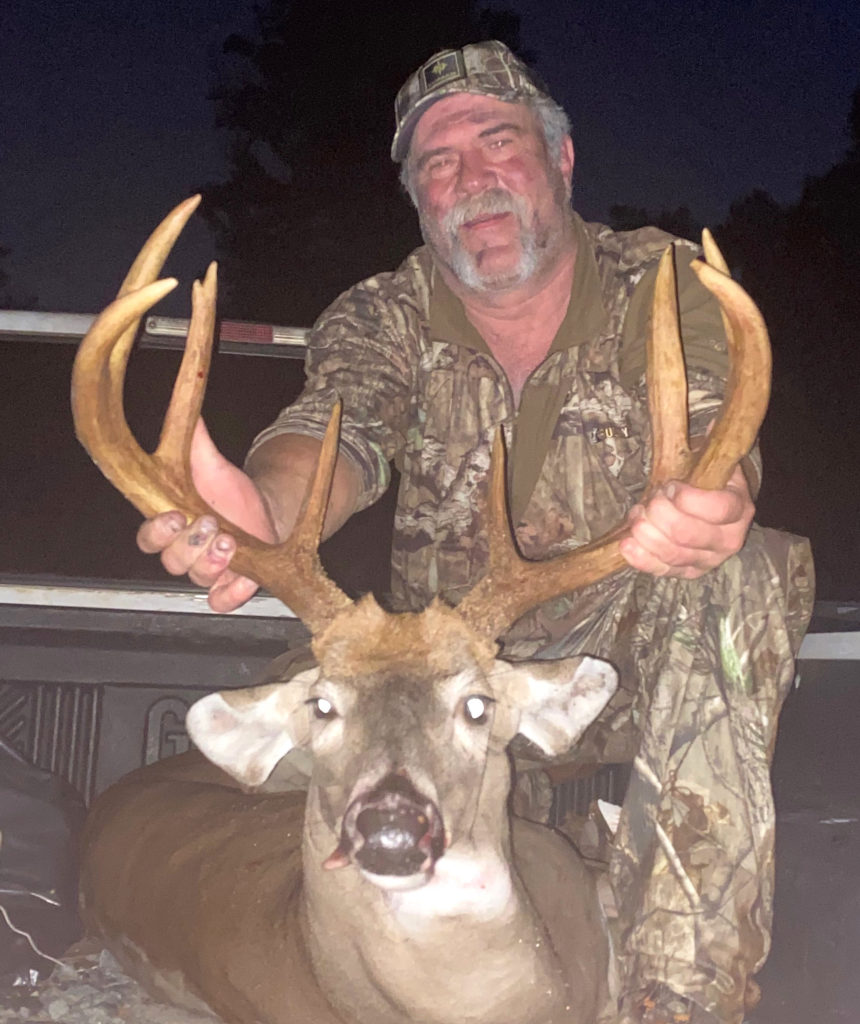 If at first you don’t succeed, try, try again. Right?

Jerry Petree of Winston-Salem certainly had that old saying in mind the opening weekend of North Carolina’s archery season when he squared off with a trophy buck on consecutive day. The first day, things didn’t work out. But the second day, Petree got to use one of his two buck tags on a great 140-inch Forsyth County 8-point buck.

Hunting on a piece of private property, Petree was intimately familiar with the big buck when he walked out — and walked away on opening day, Sept. 12.

“I had him on two different trail cameras,” Petree said. “I got photos of him when his antlers had just started sprouting in June, and I had probably two-dozen photos of him, all the way up to the weekend before, when he was in full velvet.

“I’ve been hunting there for a lot of years. I’ve been putting out minerals like Trophy Rack, feeding them Purina deer chow, and this year, I planted a clover patch,” he said. “They were coming and going to that clover patch. I even got a good video on an SD card of him and eight other bucks in the clover, all feeding at once.”

So when the 8-point buck showed up at around 6 o’clock on the afternoon of Sept. 12, the only surprise was that he came from the direction opposite of where Petree expected him to show up.

Another buck spoils the show, but 8-point buck arrives early next day

“I had an east-northeast wind, perfect for that stand, but he came from the other direction. He and seven bucks came in; there were two 8-pointers behind him,” said Petree, who was in a portable tree stand, 30 feet of the ground, with a buddy, Mark Heveroh of Pfafftown, just below him to film the hunt.

“The deer came out, and he was getting ready to come into the clover field, and there were two or three more behind him,” he said. “Even though I was 30 feet up, it’s still hard to get the bow drawn back with that many eyes on you. He needed to make one more step, and I went to draw, and the eighth buck, he’d snuck up on us and was right behind our tree. When I drew, he looked up and made a little jump, and all the bucks jump straight up, including the big one. Then, they all went back to feeding. He went to chewing his cud and scratching his ear with his hoof, but he never took that last step I needed. he was a big buck; he just sensed something was wrong, and he turned and walked straight away.”

Petree and Heveroh were back the next afternoon, and the buck showed up again, this time around 5 o’clock, and this time, all by himself.

“He was the first one out, an hour early,” he said. “He came in from the same side, and when I looked up and saw him, he was 8 or 9 yards. That close, we were so high in the tree, he’d have to break his neck to look up and see us, but I couldn’t stand up. I had to shoot him sitting.

“He moved a little and got by me. I had a perfect, quartering-away shot, but the instant I went to pull, one of the bow’s limbs or something made a little noise, and the deer jumped 3 or 4 feet forward. He stopped, but I had some beech leaves, on the end of a branch, in the way.

“I’d seen him enough to know that he was fixing to leave. I had the end of the branch between us, just loose leaves. So I put the (sight) on the leaves where I thought he’d be, and I turned it loose. I heard the arrow hit — it really whopped him — but I was sick. I told Mark I had hit him in the shoulder blade, that it didn’t sound good.”

But things got better after Petree and Heveroh got down out of the tree 30 minutes later. Almost immediately, Petree found most of the arrow, sticking up, broadhead in the ground, where the deer had been standing. But a 3- or 4-inch section of the arrow that included the fletching was missing.

Part of the arrow was still inside the buck’s body

“I knew it had gone all the way through him and broken off in him,” Petree said. “We tracked him, went about 30 or 40 yards, then we got out of there. It was about 5:30, and we went to the house, reviewed the camera footage. I have Lumenoks son my arrows, and you could see the Lumenok go through the leaves. About 7:30, we went back out, and we found a big drop of blood, and then he went down in a big ditch and didn’t come out for maybe 100 yards. Then, he came out of the ditch where it leveled off, and I found a big spot of lung blood, and I knew we had him then. We went another 30 yards and found another big spot of blood, then 30 more yards, and he was down.”

When I cleaned him, I figured I should have hit him 4 to 6 inches farther back. It hit him about in the top of the back side of the shoulder, then went down and through and came out behind the other leg It took out a lung. The back part of the arrow, 3 or 4 inches with the feathers and the Lumenok, were still inside him.”

Petree was shooting a Bowtech Revolt X bow and an arrow tipped with an Exodus broadhead — “a real bone buster,” Petree said.

Petree and Heveroh put a tape on the 8-point buck and came up with 140 3/8 typical inches, with an 18-inch inside spread, 9-inch back tines and brow tines that measured 6 1/2 and 7 inches. Taxidermist Gray Saylor of Pfafftown scored the buck a few inches higher.

“I am tickled,” Petree said. “He’s a great buck, the best deer I’ve ever killed in the Carolinas, and I’ve got 10 on the wall. He’s got mass, and he’s symmetrical.”

Congratulations to Petree, who is now entered in our Bag-A-Buck contest, making him eligible for a number of great prizes, including the grand prize which includes a 2-day, two-man hunt at Cherokee Run Hunting Lodge. Click here to view the Bag-A-Buck gallery or to enter the contest yourself.

alley102495@gmail.com Bag a Buck, Deer of the Year, Hunting Reports

Brandon Alley was having a bad day when he ended up dropping his personal best and first archery buck in Stanly County, NC. As he climbed into his stand late in the evening of Oct. […]

About Dan Kibler 847 Articles
Dan Kibler is managing editor of Carolina Sportsman Magazine. If every fish were a redfish and every big-game animal a wild turkey, he wouldn’t ever complain. His writing and photography skills have earned him numerous awards throughout his career.