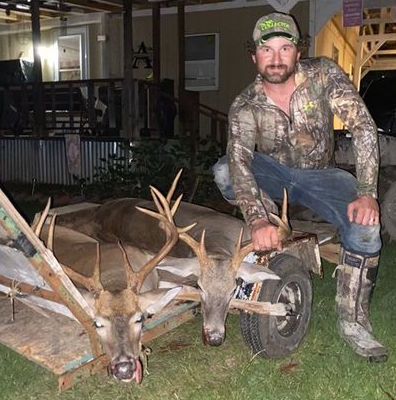 The sparring bucks were part of a bachelor group

Chuck Amerson of Cartersville, S.C. killed two fine 8-point bucks with back-to-back shots on Sept. 7 around 7 p.m. in Florence County. The animals were sparring when he shot the first one. The two bucks were both part of a bachelor group of bucks that showed up together.

“I had four bucks walk out together at 250 yards. These two started sparring — not really fighting — but heavily butting heads,” Amerson said.

He took aim at the bigger of the two deer and pulled the trigger. The buck dropped in its tracks. Amerson expected the other buck to run off, but it stayed put, acting as if it still wanted to spar with his buddy.

“I shot the bigger 8. The other buck had his head tilted as if still trying to spar. So I got a good shot on him also,” he said.

Just like the first buck, this one dropped on the spot.

Amerson shot both bucks with a 7mm Remington Mag from 250 yards away. Before that evening, he had never seen the sparring bucks, either in person or on trail camera.

Amerson’s story has been entered in our Bag-A-Buck contest, making him eligible for a number of great prizes, including the grand prize which includes a 2-day, two-man hunt at Cherokee Run Hunting Lodge. Click here to view the Bag-A-Buck gallery or to enter the contest yourself.

My name is Natalie Garrett, and I am 17 years old. I killed this buck in Person County, North Carolina where I was born and raised. This was an awesome hunt and took two days […]

Tommy Inman has killed his share of bucks over the years, but the one he killed on Sept. 18 was his first with a crossbow, and it was an awfully big one. […]

About Brian Cope 1647 Articles
Brian Cope is the editor of CarolinaSportsman.com. He has won numerous awards for his writing, photography, and videography. He is a retired Air Force combat communications technician, and has a B.A. in English Literature from the University of South Carolina. You can reach him at brianc@sportsmannetwork.com.
Website