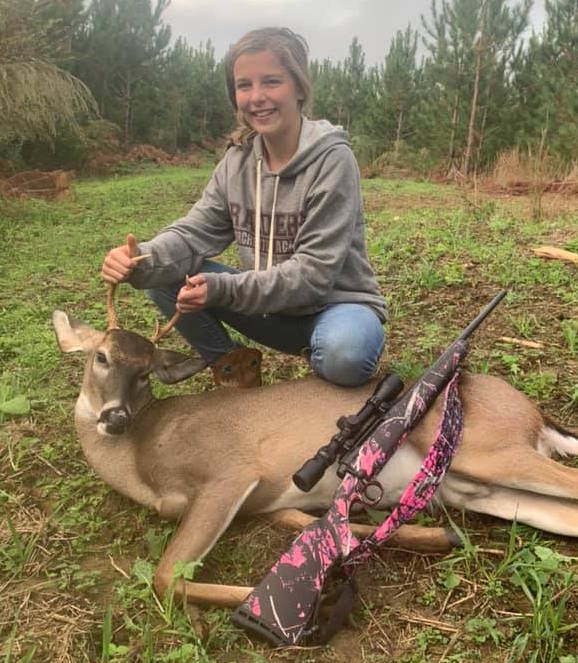 Paisley June Wolfe of Fort Lawn, S.C. killed her first deer on Oct. 26 during her first hunting season. The 11-year-old had been practicing shooting her youth model .243 since the spring, and had gotten very accurate, said her dad, Jason Wolfe.

“She was deadly accurate when shooting targets. But she was getting the shakes in the deer stand earlier this season. I knew she wouldn’t miss if she could keep her nerves under control,” he said.

The young sportswoman is no stranger to the outdoors, or to dealing with trophies. She’s caught and released numerous catfish, including a 61-pounder, that would rival the personal best of many long-time anglers. And she’d love to kill a trophy buck some day. But for most hunters, the first deer can be more important than a state record book buck. A doe would be perfect, her dad said, because it would put meat in the freezer and give her the confidence that only comes with getting that first deer under your belt.

“We hunted two days that weekend, and she could have shot a doe each time. But she just couldn’t quit shaking and calm down enough to take an accurate shot,” he said.

First deer was the icebreaker

But she wasn’t about to give up. Her dad offered to take her again the next morning, and she was up bright and early, ready to prove to herself that she could do it. She got the chance when a 3-point buck showed up and offered her a 100-yard shot. And this time, everything fell into place.

“We went the next morning, first thing. And when that buck walked out, she just put the crosshairs on it and pulled the trigger and it dropped,” said Wolfe. “The goal for that weekend was to get Paisley her first deer. I wasn’t sure it was going to happen at first. But she stayed patient and we made it happen.”

That first deer was exactly what she needed. This past weekend, she was back in the stand and killed her second deer, this time from 160 yards away.

“She’s learning quick. That second deer she shot, she dragged it out herself, loaded it on the four-wheeler, and drove it out. She’s growing up,” said Wolfe.

Congratulations to Wolfe, who is now entered in our Bag-A-Buck contest, making her eligible for a number of great prizes. That includes the grand prize, a two-day, two-man hunt at Cherokee Run Hunting Lodge. Click here to view the Bag-A-Buck gallery or to enter the contest yourself.

Be flexible for Lake Murray bass in May

Lake Murray’s bass are plenty active in May. Catch your share with these tips. […]

Photo of the Month: Courtney Joyner

Courtney Joyner of Camden, S.C.”s image of her turkey harvest while 8 months pregnant is our April 2021 Photo of the Month. […]

Keller is 10. I told him when he turned 10 I would take him Turkey Hunting. He killed this nice Gobbler in Allegheny Co this past weekend on his first hunt. We didn’t weigh the […]