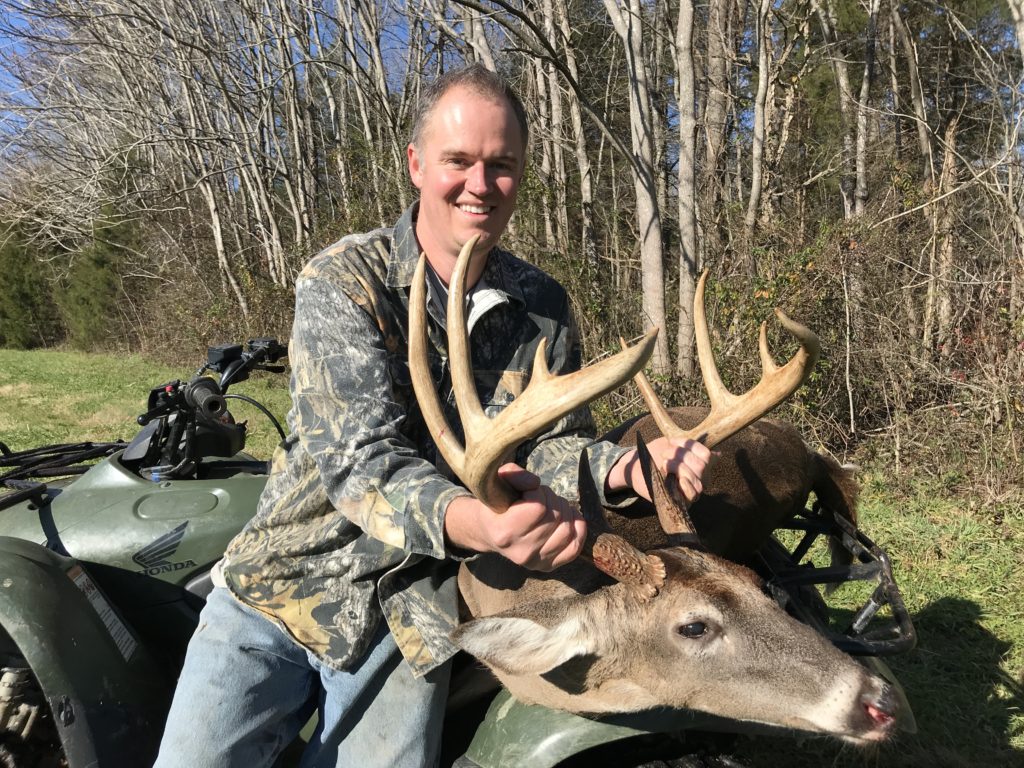 Big buck was an unexpected surprise

Chad Staples of Efland, N.C. killed a big Chatham County bruiser of a buck on Dec. 18, 2020. It was a bonus deer of sorts; he’d entered the stand that morning hoping to bag a doe to put some meat in the freezer. And he had his chance to do it, but is glad he waited before pulling the trigger.

“I was sitting in a new spot that morning. I was really wanting to bag a doe or two. And I saw about six does in a thicket. I was going to shoot the first one that gave me a chance. But then I heard a stick break behind me,” said Staples.

He turned around, cautiously, in hopes of getting a look at what made the noise without spooking it off. And that’s when he saw something he wasn’t expecting.

“I turned around, and here stood this bruiser of a deer,” he said.

But Staples didn’t have a clear shot at the Chatham County buck. So he hung tight, playing the waiting game while the buck took its time deciding what it was going to do. After several minutes, he finally got the opportunity he wasn’t even thinking about when the hunt first started.

“It took about 10 minutes for him to move to an area I could get a shot off,” he said.

Once he had a clear shot, the hunter pulled the trigger and killed the trophy buck.

“I’m so glad that I got to take him home instead of having just another story of the one that got away,” he said.

Congratulations to Staples, who is now entered in our Bag-A-Buck contest. This makes him eligible for a number of great prizes. That includes the grand prize, a two-day, two-man hunt at Cherokee Run Hunting Lodge. Click here to view the Bag-A-Buck gallery or to enter the contest yourself.

Hailey Holleman , 10-years-old of Statesville , NC located in Iredell County bags this impressive nine pointer on Dec. 29, 2020. Thanksgiving day was her first taste of hunting with her grandfather and was her […]

About Brian Cope 1742 Articles
Brian Cope is the editor of CarolinaSportsman.com. He has won numerous awards for his writing, photography, and videography. He is a retired Air Force combat communications technician, and has a B.A. in English Literature from the University of South Carolina. You can reach him at brianc@sportsmannetwork.com.
Website