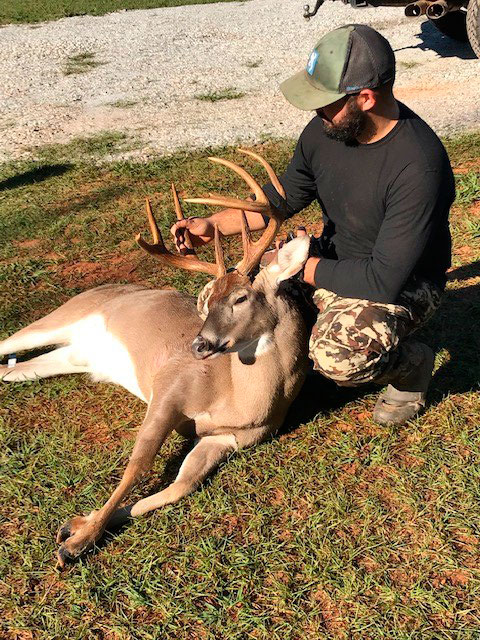 Most deer hunts are meaningful, have family ties, self rewarding, as well as preservation of faith. It drives folks to get out of bed, fight for well being in the world, keep a good family, and platform to conversations with the lord. We strive at different things in the outdoors, however it may be, whether it’s feathers or fur, water or land. Decades of traditions, knowledge, and exchange of these secrets from friends and family, and the ever changing perspective of land management and the fight to keep a piece of dirt to create this world.

This story is nothing different, as it ties the meaning of life and how I drive myself every day. Purpose, most men would call it. For others, it’s tradition, or it very well could be the one thing that keeps us, as humans.

This deer is a “booner.” No it doesn’t score 170 inches. And it’s not the pinnacle of whitetails to a lot of you, because you are able to see these on more occasions or travel to states on the reg that have these. However to me it is. Why you ask? It’s South Carolina for one, and second, I’m 32 and I’ve been searching for 17 years to kill a deer to score in the record books of 125″. This deer will, what it will for the record I don’t 100% know, but after 3 people scoring I know it’s going to be over 125″ and able to be recorded in the SC books. My name there, along with many others on a typical platform.

This Deer came into my life Oct. 31st @ 1:41 pm. I received a text message via reveal while working on a project in the garage. Picture of course stopped me in my tracks of current productivity, and I sat for an hour analyzing the picture, just like most of us, and just in awe of what possibilities may arise to harvest this deer. One being, since this was behind my house, go ninja in there at that exact moment and kill him. That moment he consumed me, because that was my 125″ deer. However it’s halloween, rut is on, and this deer is just cruzing by with no intent to stay in the area.

Then 5 hours later, I find my uncle which had passed in his final hunt peacefully, and it created one whirlwind of emotions towards life, and my emotions to this deer because I told him to sit overlooking where he may be.

It was that night I named this deer “Freddie’s Deer.”

Fast forward a week of grieving, and second guessing hunting again this year, my aunt gave me the strap from his climber on the 8th. She knew I climbed in one much like his, as well as knew I was the first person to get to him. She wanted him to be in the woods every time I climbed and she knew the strap would be apart of my climber in the woods every time I hunted. She also knew I was headed to Kentucky the next day and was hopeful it would give me good luck.

That was the 8th of November. That night “Freddie’s Buck” made his appearance again for the second time.

Spent a few days hunting in Kentucky, and with only 1 opportunity for a decent deer, I came home empty handed.

On the ride home (Nov 13th), I received zero pictures through the week of this deer, only of others from game management I hunt, and it gave me the “drive” to hopefully kill a good WMA buck. However it sat my mind that “Freddie’s deer” may still be around. So I hunted a few days on WMA, and thought in the stand, how to set up to kill the one that had haunted me now for 16 days straight.

Nov 17th: I finally decide to hone into where he may possibly be held up, because 11/8 he was not how you say, skinny. My thoughts this deer was pinched into a bedroom and maybe I could figure out where.

Low and behold, I found it, rub lines, scrapes, bedding, food, and water. All in a 4-acre area on the corner of my Mamaw’s property that he has been using. Hope was restored, and it was time to “see” if it held true.

Remember when I told you I had been looking for a 125” deer for 17 years? Well the reason being my dad gave me a summit viper back in 2002 for Christmas and told me that stand would be used to kill every big deer I told him I’d kill, as well as put my name in the SC record books.

That summit has been apart of every big deer I’ve killed in exception of 1 from this year. It has also been a part of my first bow kill, seen several states, hundreds of trees, mornings, afternoons, talks to god, misses, destinations for stress relief, hours of grieving. You name it, it has seen it when it comes to climbing because that stand has been the only stand I’ve used to climb since 2002.

Since then my dad has passed, and I told myself this year will be the last year as every thing including the straps, cords, bungees, and rope that keeps the bottom tied to the top while in use are all still intact and have not broke. I want that stand to be retired this year, and I wanted to remember my dad with it, along with 17 years of life it has brought along with it.

Nov. 19th I sit in the area I feel is where he could be. 5:15 pm I watch 3 does being harassed by a nuanced 4pt all until the sun decides to fade and the night decides to try and squeeze in. Except, before it gets too dark, and while I’m watching the same 4 deer for the past 30 minutes, I pick up on one walking behind me. Definitely a deer, and definitely not wanting any thing apart from what was going on in front of me, so he makes his way around me, too thick to see anything and decides to make his way out when there is just not enough light.

I knew it was him, I just felt it was. Gut feeling we all have. However again too late..

Nov 21st: I told myself this was it, last hunt of 2020 and the last time I sit in this Summit. I will not hunt from it again, because I just can’t live knowing I could have retired it and something was to happen to it.

I get in the stand at 6am, and settle in like normal. Do my morning ritual with the lord, and do my phone swiping as the sun and light make the trees, and landscape come alive for another day.

6:45 I just so happen to look up, and catch movement, and with it being still low light, there was no denying a rocking chair moving through the edge of the thicket. I post up quick, and catch a white nose. It’s him, holy crap, I stop dead in the scope as literally pull the trigger I say whispering to tell Freddie, ” I got him bud.”

I watch him scramble off, and just absolutely flood with emotions. You just know sometimes.

I won’t get into details finding him, as my mind made quicker work than my feet, and after circling him 5 times Lets just say it was finally nice to meet “Freddie’s Deer.”

Last hunt of 2020, with my climber of 17 years, with a buck I knew meant more than any deer possible.

Ya’ll give a warm welcome to “Freddie’s Deer”

Alisha Ricketts killed a big Rockingham County buck on Dec. 22, 2020. It’s a buck that regularly appeared on trail cam, but was elusive when Ricketts was in the stand. […]