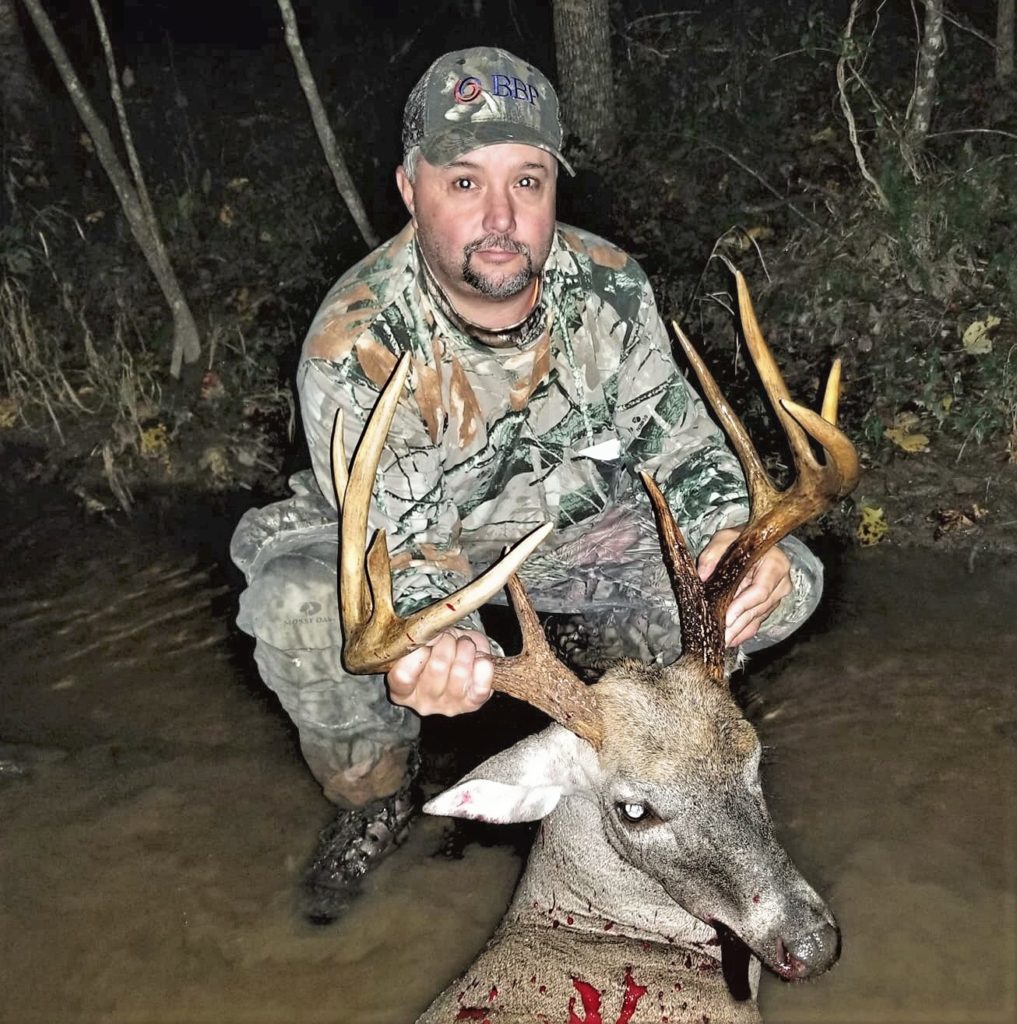 Joey Dement of Centerville N.C. killed a Franklin County monster buck on Sept. 30. The 10-point buck has been green-scored at 152 6/8 inches. The hunt ended Dement’s years-long quest for the buck — his biggest ever.

And by the time he saw the buck, he’d already given up for the day. Such a surprise ending was typical for his pursuit of this deer, which was long, frustrating, and grueling.

Dement had to scrap initial tactics even though an automated corn-feeder often lured the buck to his permanent stand. The hunter had dozens of trail camera photos of the buck. But he was forced to move his stand and feeder.

Finally, Dement improbably shot the deer in a weed field full of multiple deer, after he’d gotten out of his stand and was returning to his truck.

“I’d been hunting him for two years. He always came to the woods feeder. Last year, I saw him twice. But he was too far. But the permanent stand seemed to spook him and the two bucks who were with him, and they’d walk away.”

So he set up a Summit Viper climber near the feeder, and “then (the buck) came at night and later disappeared for four weeks.”

The day he killed the deer, Dement sat in the tree stand for hours, gave up at 7 p.m., and ratcheted the stand to the ground.

“I walked toward a hay field where I parked my truck,” he said.

At the edge of a cutover adjoining the field, a 6-pointer spotted the totally camouflaged, slowly-moving hunter.

“I backed up a step. And the 6-pointer, lucky for me, walked off in the other direction,” he said.

Checking the field with binoculars, Dement spied an 8-pointer in belly-deep broomsedge.

“He kept looking back. So I thought something else might be out there,” he said. “I spotted the 10-pointer 60 yards out, walking toward me,”

The hunter eased a little farther back into the cutover.

“I didn’t want him to spot or smell me. And I didn’t want a straight-on shot,” he said. “I had the crossbow across my shoulder. So I had to get it ready and load the bolt. Lucky for me, it was a wet, cool day with no wind.”

At 7:15 p.m. with the buck at 25 yards, Dement put the Carbon Express crossbow’s scope crosshairs on the buck’s shoulder and squeezed the trigger. It sent a three-bladed Grim Reaper mechanical broadhead through the deer’s heart.

Buck ran into a creek

“He ran across a hedgerow and tobacco field. Then I didn’t see him,” Dement said. “I didn’t know if I’d hit him. I thought ‘he’s gone.’”

He called friends Michael Marciniak and Dean Shearin. They told the shaken hunter to stay in place.

An hour later, expert tracker Michael “Block” Malone followed a blood trail 150 yards to the buck. It was lying in a creek.

“I jumped 10 feet (off the creek bank) into water that came up to my knees,” Dement said. “I was soaked until 12 that night.”

“My buddies were happier about the buck than I was,” he said. “They hunted stands out to one-half mile from me and never got a (trail camera) picture of this deer. If he went their direction, he stayed hidden.”

Pearce’s Custom Processing of Louisburg scored the buck’s rack and prepared the venison.

“The bases of the main beams both were 5 inches around,” Dement said. “The rack had a few less-than-one-inch-long sticker points around the bases. The only deduction is one of the brow tines is taller than the other.”

Congratulations to Dement, who is now entered in our Bag-A-Buck contest, making him eligible for a number of great prizes, including the grand prize which includes a 2-day, two-man hunt at Cherokee Run Hunting Lodge. Click here to view the Bag-A-Buck gallery or to enter the contest yourself.

Ryan Carswell of Greenville, N.C. was archery hunting over a soybean field on Sept. 12, 2020 when he killed his first full velvet buck. […]