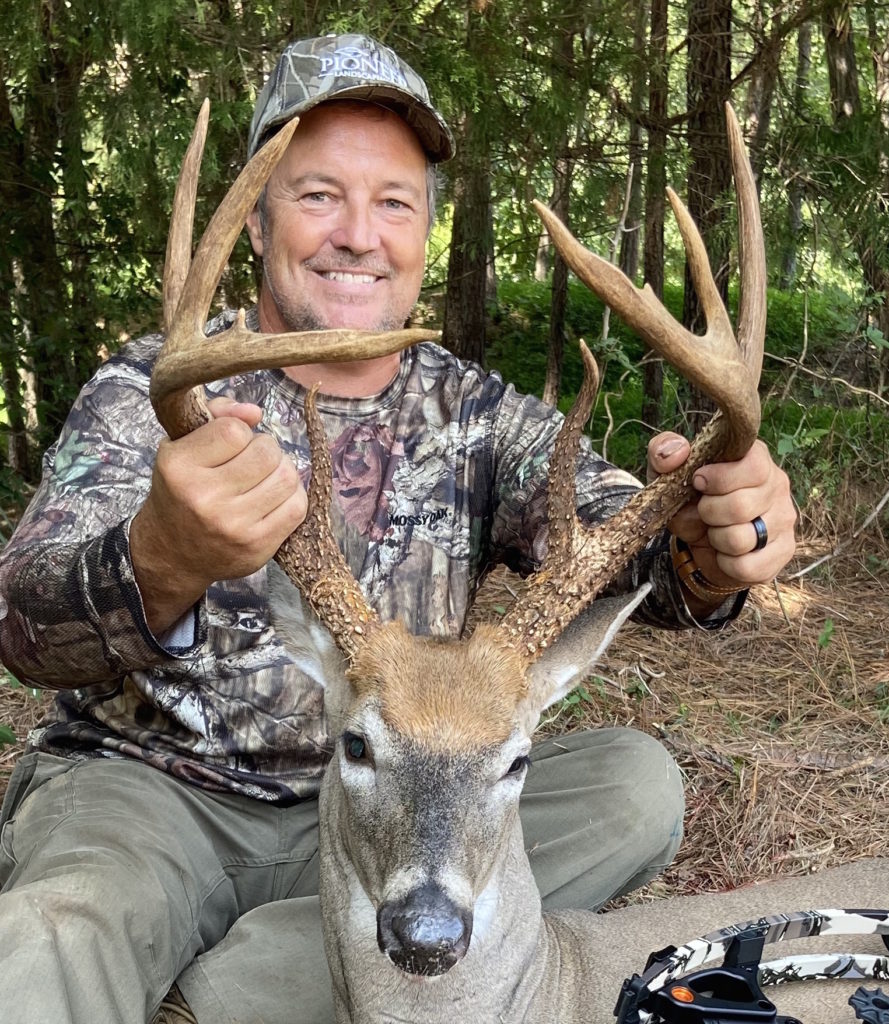 North Carolina crossbow hunter Kevin Carswell killed a big 10-point buck on Sept. 14, his birthday, with a crossbow from 67 yards away. And it wasn’t just a chance encounter. Carswell had a history with this deer. And he put in plenty of effort to keep it on his hunting land.

“I had been working on this deer since the end of last season. I planted summer and fall food plots. These worked well for holding him,” he said.

While observing the 10-point buck, it became clear to Carswell that this deer was the dominant male in the area. So he named the deer Boss.

“The name Boss came from his obvious dominance over the other bucks in that area. He often kicked and knocked them out of his way,” he said.

Carswell was determined to kill the buck. And on his second hunt of the season, he finally got the chance. But it wasn’t a sure thing. The buck didn’t make it easy on him.

“My second sit of the season was on my birthday, Sept. 14. I was watching several does eating in the food plot on one side when he appeared out of nowhere on the other side. He came in to 55 yards, but was acting spooked,” he said.

The 10-point buck begins to walk away

Carswell, shooting a Ravin crossbow, was comfortable shooting that distance. But he waited for a better shot. Unfortunately, the opposite happened.

“He turned and started to leave, taking a couple of quick steps. I ranged him again at 65 yards and decided to take a shot. I heard the arrow smack his rib cage, and he bolted,” he said.

Carswell called his son to help him track the buck. They found the arrow which had made a clean pass through. The amount and color of blood told the hunter he’d made a double lung shot. Pretty quickly though, the blood trail went cold.

“The trail got faint. I painstakingly found one drop at a time for about 60 yards before losing it in a pine thicket. We walked in circles for hours but couldn’t find him,” he said.

Disappointed, Carswell played the scene over and over in his head that night. The next morning, he went back to renew the search.

“I followed a trail 180 degrees in a different direction and walked up on him less than 100 yards from the stand. The shot was a good double lung, but a little high. The actual range was 67 yards. I think he ducked when I shot. Or I could have flinched. My Ravin crossbow paired with a Rage broadhead did the job in the end. He is a gnarly 10-pointer with a cool rack full of character.

“I’m proud of the work we put into getting a shot at this deer,” he said.

Congratulations to Carswell, who is now entered in our Bag-A-Buck contest, making him eligible for a number of great prizes, including the grand prize which includes a 2-day, two-man hunt at Cherokee Run Hunting Lodge. Click here to view the Bag-A-Buck gallery or to enter the contest yourself.

Michael Collins put together a video of his quest for a Franklin County 10-point buck that green scored 140 inches. Check out his quest for this deer. […]

September 26, 2020 was youth hunting day and also happened to be Lakyn Dodson’s thirteenth birthday. Lakyn and her uncle had seen a nice buck on their cam which Lakyn decided to name “Todd”. Lakyn […]