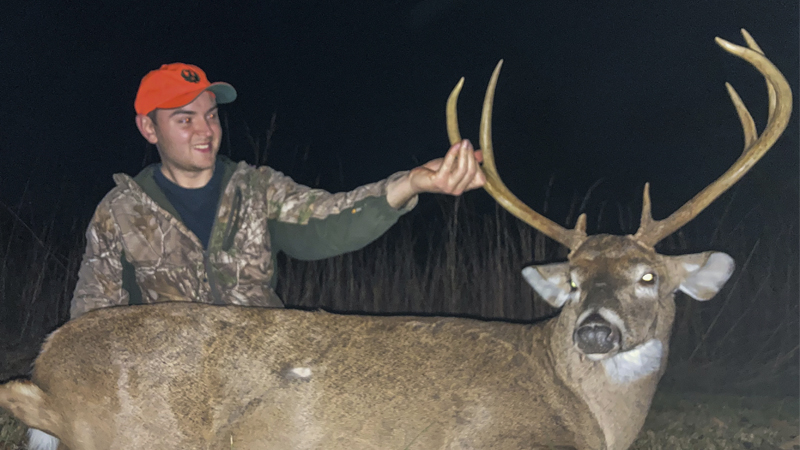 Wide-racked buck showed up on small tract of land

Chase Tedder of Walnut Cove, N.C. killed a unique trophy buck on Nov. 25 during an evening hunt. The 7-point Stokes County buck had a 20+ inch spread, and was estimated to be between 4 1/2- and 5 1/2-years-old.

As a full-time student at UNCG with a full plate of extracurricular activities, Tedder was short on time. So with the little free time he had, he decided to spend it hunting for a trophy buck. After killing one deer on a friend’s land, Tedder set up a camera on a small parcel of land, hoping to see something worth hunting. And he was in luck.

“I had just recently set up a camera on a 3-acre parcel of land. My first card pull was incredible — a large buck with an astonishing wide-framed rack had come through,” he said.

The small tract of land connected to a larger block that Tedder believes the big buck spent most of its time, protected from much hunting pressure by bordering properties. A friend helped him put up a ladder stand overlooking the ridge where the trail cam had photographed the buck.

“It was very grown up through there, so my longest shot was only about 50 to 60 yards,” he said.

He began hunting the stand as often as possible, passing on other deer in hopes the wide-racked buck would show up.

Tedder shot the buck from 60 yards away

“On Nov. 25, the conditions were set up just right, with a slightly overcast sky and a favorable wind for my stand.

“I got settled in my stand about 3:15 p.m. With only about 30 minutes before dark, I had a doe come to my right. And coming from the thickets behind her, I could hear a series of deep grunts,” said Tedder.

He waited, and suddenly, the wide-racked buck appeared. He didn’t waste any time.

“I kept still because the doe was only about 30 yards away at that point. And out of nowhere, another deer was straight in front of me about 60 yards. I raised my Savage bolt-action 6.5 Creedmoor and sent a 125-grain Winchester Deer Season XP into his shoulder.

“The deer fell immediately. But I watched as he frantically pushed himself out of my view,” he said.

Tedder’s friend showed up to help him track and recover the buck, which only made it about 25 yards before expiring.

A 12-year cancer survivor, the 21-year-old’s chemotherapy treatments and multiple surgeries have left him unable to participate in many physical activities or sports. That’s helped him form a passion for hunting and fishing.

“It gave me something to be good at and grow in. Now I thank God for every opportunity,” he said.

I finally did it! I started deer hunting with my dad when I was 8- or 9-years-old (40+ years ago). And this year, I finally killed the buck of my dreams! I climbed in the […]