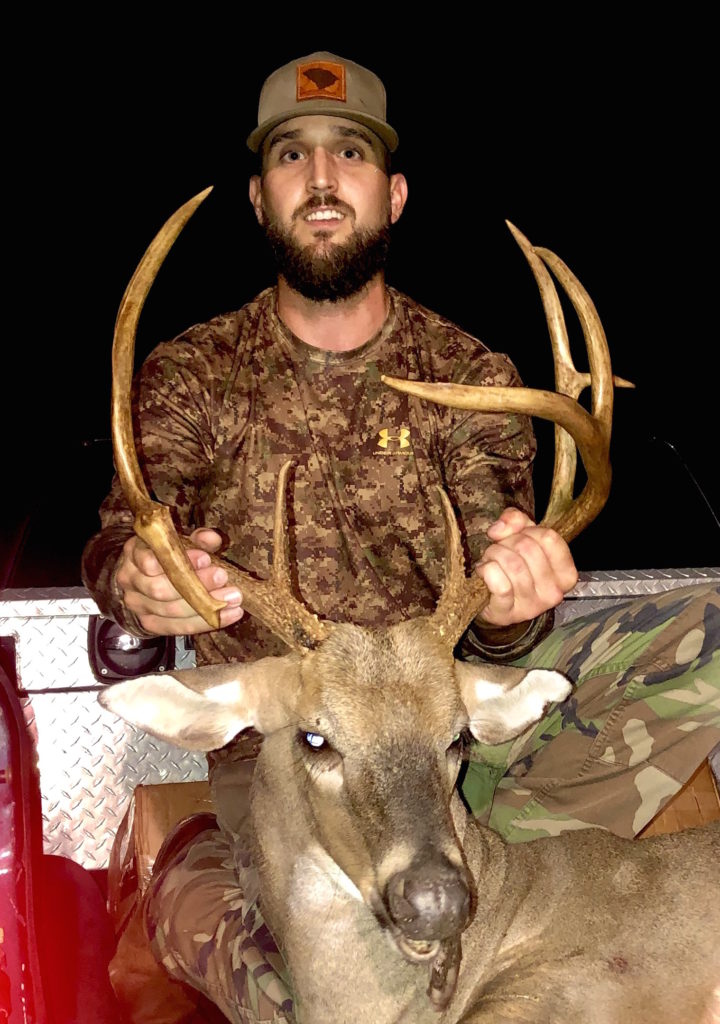 “For a few years, he was a complete ghost. He was entirely nocturnal. I’ve been watching this brute for at least 4 years now. He came out 3 weeks ago around 220 yards. I took the shot, but never found any sign of him being hit,” said Robinson.

He put in a lot of thought about what went wrong on the hunt. And he spent time on the range practicing with his rifles and shotguns. And he kept after the elusive buck.

On Sept. 7, Robinson saw a lot of action from his stand. And just before dark, the buck stepped out, offering him a shot. But this time, he didn’t take it.

“My stand is on top of a hill and I had him broadside. He was 215 yards away in a bottom. Well, I had to work that night at 11 p.m., and I didn’t want to chance a bloody shot with no time to trail the deer. Especially when I thought I’d missed a few weeks before,” he said.

It wasn’t an easy decision for Robinson, but he felt confident he was doing the right thing. And he had high hopes of seeing the deer again. And he did see it again, just two days later.

“On Sept. 9, the deer were moving again and it all came together. After watching 10 does, including one with her twin fawns, the big buck’s traveling companion, a 6-point, stepped out. Soon afterward, my target buck made his way into the lane at 185 yards broadside. I waited until he walked farther out in the open. After a few deep breaths to calm my heart rate, I took the shot,” he said.

The buck kicked up, then disappeared.

“I went to look for any sign to see if I hit him. Nothing. Not a drop of blood. Not even where he kicked up or anything. Discouraged once again, I looked around with my flashlight. And at the edge of the woods, there he was, 20 yards from where he ran off. He was down!” he said.

The date, Sept. 9, was significant for the hunter. He killed his first ever buck on Sept. 9, 1999. So he found it a nice coincidence to take this buck on the same date so many years later, especially during a year such as this one.

“2020 ain’t so bad after all. I completed my journey of getting “The ghost” and I couldn’t be more ecstatic.

And that first shot Robinson took at the deer? It wasn’t as far off as he’d thought.

“He had three holes in him. Entry and exit holes, and a hit from when I thought I’d missed. Turns out I did hit him 3 weeks ago, but I just grazed him 1 inch from his windpipe.

Congratulations to Robinson, who is now entered in our Bag-A-Buck contest, making him eligible for a number of great prizes, including the grand prize which includes a 2-day, two-man hunt at Cherokee Run Hunting Lodge. Click here to view the Bag-A-Buck gallery or to enter the contest yourself.

Chris Glosson of Rougemount, N.C. killed the biggest buck of his life on Sept. 15, 2020 during an evening hunt in Granville County. […]

About Brian Cope 1664 Articles
Brian Cope is the editor of CarolinaSportsman.com. He has won numerous awards for his writing, photography, and videography. He is a retired Air Force combat communications technician, and has a B.A. in English Literature from the University of South Carolina. You can reach him at brianc@sportsmannetwork.com.
Website