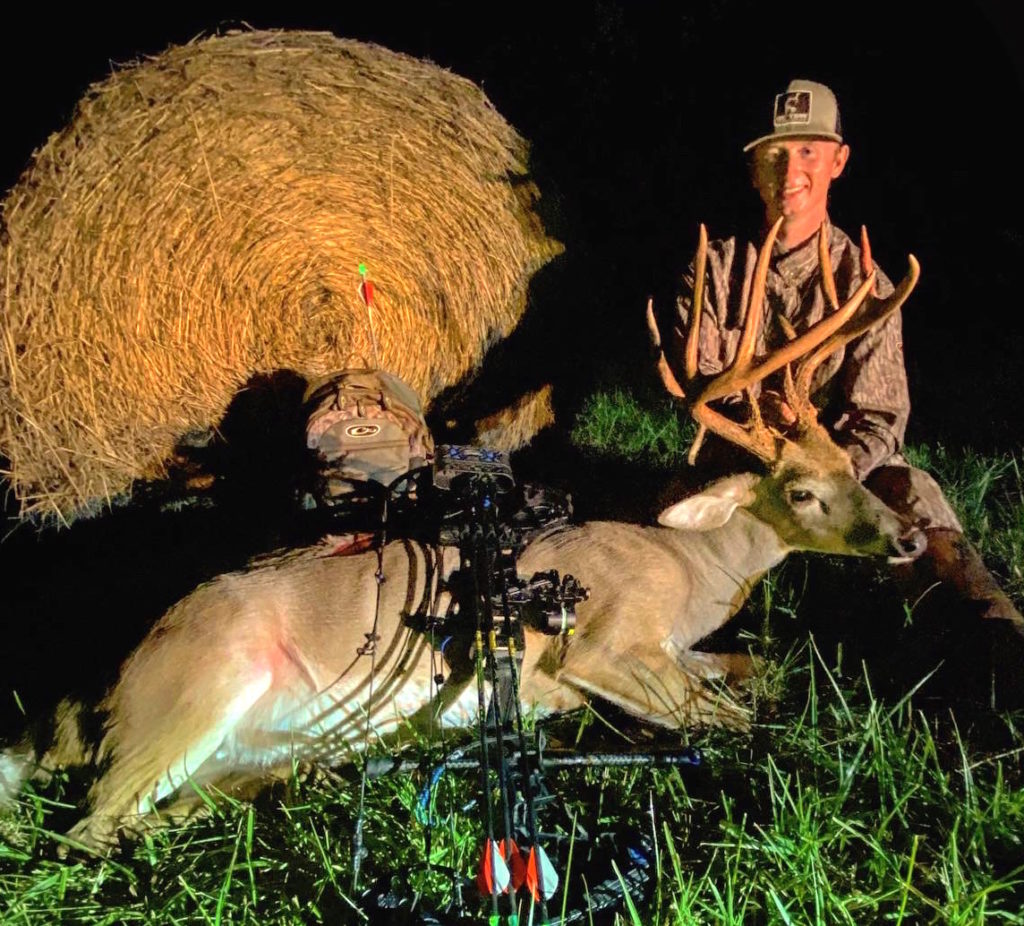 Randolph County 10-point buck blew up in size since 2019

Hunter Williams of Sophia, N.C. killed a big Randolph County 10-point buck on Sept. 18, 2020. The buck has been green-scored at 146 inches. Williams had a little bit of history with the deer, and did his homework to score a 42-yard shot.

“I had him on camera last year,” he said. “He was a 10-point last year too, but he was nowhere near as big or had the tine length. I had pictures of him last year since about August, and all throughout the year until the last day of deer season. So I knew he’d made it.”

The deer made it through the offseason too. And once Williams put his cameras out in August of this year, he was happy to see the buck still coming around. The buck was in velvet in the first several photos. And last year, Williams noticed that once it shed that velvet, the deer moved to another side of the property. So he had a hunch it would be the same this year.

His hunch was correct

He put up a stand on the opposite side of the property from the trail camera that caught him in velvet. He had a camera in this new stand’s location too, and it had not recorded any photos of the deer yet. But that changed once the deer shed its velvet. And that’s just what Williams was anticipating.

‘Sure enough, when he shed his velvet, that’s where he popped up at,” he said.

His first day hunting this new stand, Williams saw two deer, but not his target. Unfavorable winds kept him away for a few days. But a week later, everything came together. He got in the stand around 4:15 p.m. About 6:30, the big Randolph County 10-point buck showed up.

“I hunted the stand one evening and saw two little does. About a week later, he came out one time. I don’t know if something spooked him or what, but he ended up running back in the woods. About 10 minutes later, he came back out. He was just real skittish and spooky. He turned broadside at 42 yards and I didn’t know if he was going to leave again or not. So I drew back and was able to make a pretty good shot on him,” he said.

Listen to our interview with Williams:

It was a pretty good shot indeed. The deer ran, but fell for good within eyesight of Williams.

“He didn’t even make it out of the field,” he said.

He shot the buck with a Mathews VXR bow. It is the first deer he’s drawn back on with that bow.

“I was tickled to death. It was even more special getting him with a bow,” he said.

Williams stressed that a big part of killing trophy deer like this one is letting them walk when many other hunters would shoot them. One season made a huge difference in the mass and tine length of this buck’s antlers. He could have shot the buck on multiple occasions in 2019, but it didn’t even cross his mind. His patience paid off big time.

Congratulations to Williams, who is now entered in our Bag-A-Buck contest, making him eligible for a number of great prizes, including the grand prize which includes a 2-day, two-man hunt at Cherokee Run Hunting Lodge. Click here to view the Bag-A-Buck gallery or to enter the contest yourself.

Killed my first turkey in my first year of turkey hunting. Name is Derek Bowen shot this in wake county 11.5 inch beard.

I caught this bass in Stokes county in a private pond on July 19, 3 months after turning 65. Caught it on a crawded-colored Booyah spinnerbait just as a thunderstorm was brewing. I returned it […]

Jessica Coker of Lake City, SC took her first deer ever a nice 9 point Williamsburg County buck on October 26, 2020 This was her first time in a deer stand in over 18 years.

About Brian Cope 1675 Articles
Brian Cope is the editor of CarolinaSportsman.com. He has won numerous awards for his writing, photography, and videography. He is a retired Air Force combat communications technician, and has a B.A. in English Literature from the University of South Carolina. You can reach him at brianc@sportsmannetwork.com.
Website