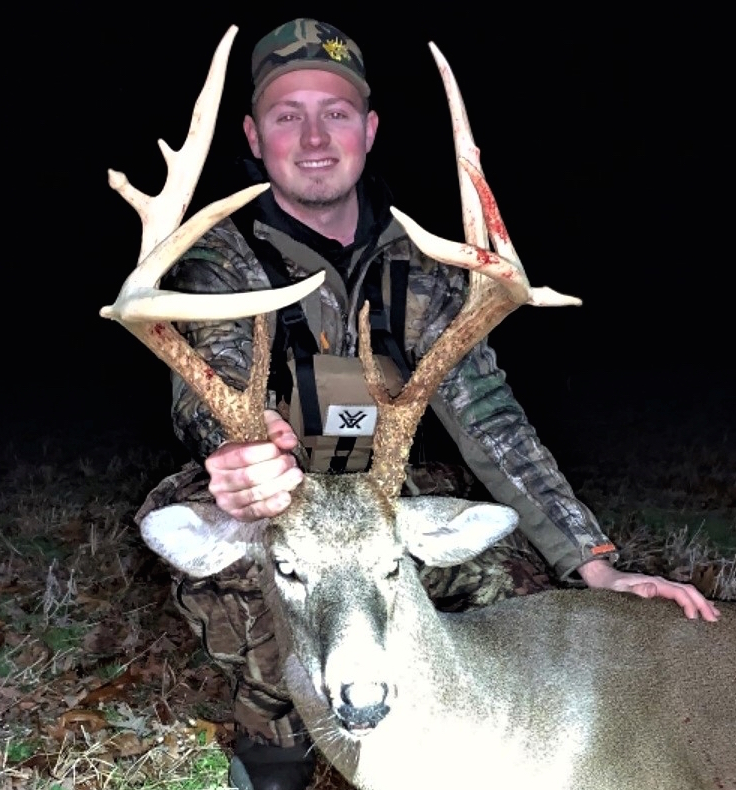 The 12-point trophy had an unusually tall rack

Justice’s tactics included his awareness that a fast-approaching cold front would have deer on the move, attractive food sources, a well-hidden stand that provided long-range shooting opportunities, and a tack-driving rifle.

The hunter had watched the buck for three years before deciding to take a 276-yard shot at the 12-point trophy.

“I’d been hunting this property for three or four years,” he said. “And I had confidence in my rifle. I knew if a buck came 300 yards or closer, I could make the shot.”

Justice shot the 12-point trophy with a Savage Storm .270

He knew it was likely deer would move on Dec. 2, which was a cold day. He sat that morning along the field’s edge in a buddy style stand that’s well camouflaged with tree limbs from the big cedar tree it’s attached to. He had a shooting bag that fit snugly around a metal arm rest.

“Every year, there’s a little trim work to do,” he said. “A person on a four-wheeler could ride by and never see it.”

As Justice expected, the big deer showed up that morning. But it didn’t walk within range.

The height of the deer’s rack was impressive

He waited a few more minutes, but soon left for his job. He returned that evening, but the buck didn’t appear. The next morning was also a bust, but the hunter came back that afternoon.

At 4:40 p.m., the deer stepped out of the woods and walked to a feeder in the field. Justice watched the buck for 30 minutes. With light fading, he ranged the deer at 276 yards, put his crosshairs at the top of its shoulder and squeezed the trigger.

The buck weighed 180 pounds and featured G2s measuring 13 inches. The rack’s asymmetry and the scant inside spread of 13 inches didn’t aid the rack’s total score when taxidermist Craig Hall of Mebane taped it at 145 gross/green inches.

But the rack’s unusual height makes it a visual stunner. From its skull’s crown to the rack’s top totaled 21 inches.

I finally did it! I started deer hunting with my dad when I was 8- or 9-years-old (40+ years ago). And this year, I finally killed the buck of my dreams! I climbed in the […]

My first beaver, a large female I trapped on Jordan Game Land in Apex, NC on Jan. 7, 2021. Kaitlin Lospinoso