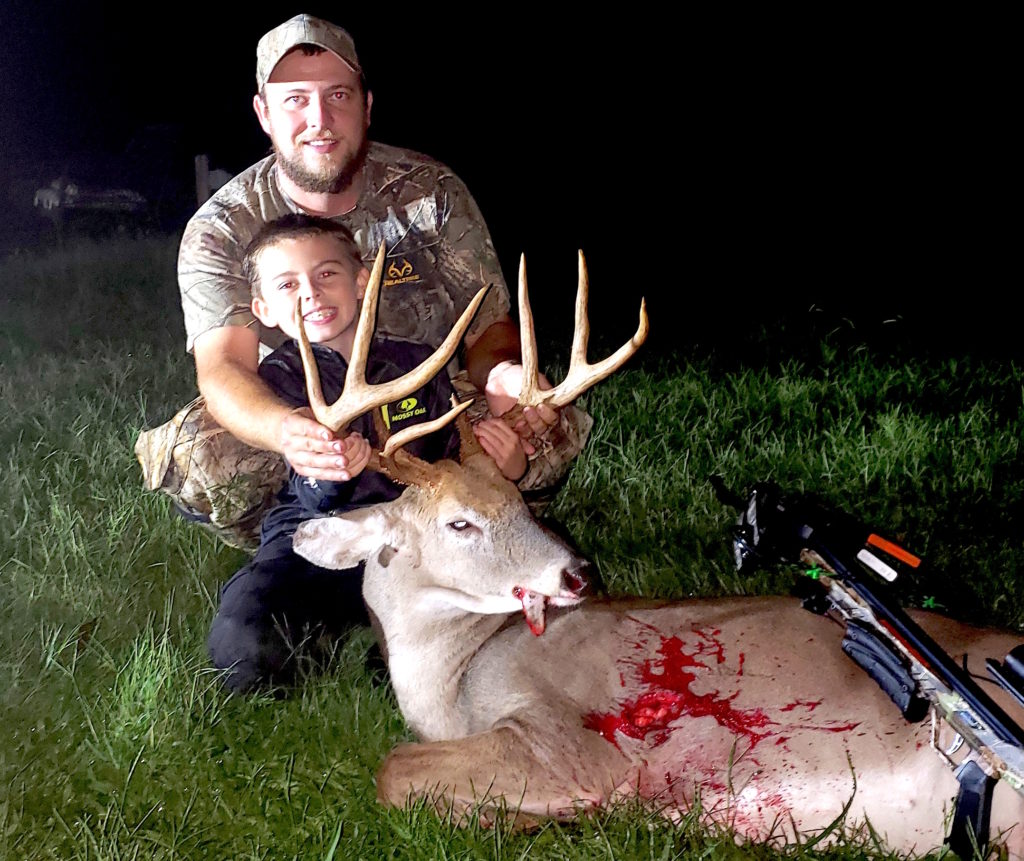 Nine-year-old Cayden Currin of Rougemont killed his first buck on Sept. 18 during an evening hunt with his dad. The Person County buck had an extra beam coming off the base of its antlers. The deer has been green-scored at 134 1/8 inches.

Throughout the offseason, the young hunter had picked out a 10-point buck through trail cam photos. He decided to target that buck this season. But that buck suddenly went nocturnal, then seemingly disappeared from the property. The double-beamed buck was showing up sporadically until Sept. 15. He showed up two days in a row during shooting hours, said the young hunter’s dad, Chris Currin. He decided to try for the buck on Sept. 17.

“The double beam buck showed up at 7:27 p.m. on Sept. 15, then again at almost the exact same time of the 16. It stormed on the Sept. 17 and I sat in the rain waiting on him. But he was a no show. So on Friday, I picked my son up and we went to the house. I told him that the double beam buck had been in during daylight twice this week,” said Chris Currin.

The father-son duo got in their blind around 5:30 p.m. and saw a doe and a fawn by 6. They fed in front of the hunters for a while. And then things got interesting.

The young hunter’s shot passed through both lungs

“At 7:08, they took off. I looked over and there he was — the double-beamed buck. He was standing with a young, but impressive 9-point buck that shows up frequently on our trail cameras,” he said.

But the smaller 9-pointer was standing in the way, preventing a clean shot at the target buck.

“We waited for the perfect shot. And after a minute, we had the opportunity and Cayden took advantage of it. He fired a bolt from his Carbon Express crossbow. The Thorn broadhead double-lunged the deer,” he said.

The deer took off. They were sure it was a good shot, but not wanting to pressure the deer into running further, they went back home and waited for a friend to show up and help them track the buck. They returned a short while later and began their search. It was immediately evident the young hunter had made a clean kill shot.

“We found blood on the corn pile, blood on branches, trees, leaves. You name it, there was blood on it. We found the deer about 45 yards away. He had slid up into some briars. We drug him out and celebrated. It’s Cayden’s first buck, and a wall hanger. It’s a memory I’ll never forget,” he said.

Congratulations to Currin, who is now entered in our Bag-A-Buck contest, making him eligible for a number of great prizes, including the grand prize which includes a 2-day, two-man hunt at Cherokee Run Hunting Lodge. Click here to view the Bag-A-Buck gallery or to enter the contest yourself.

Lawton Robinson of St. Matthews, SC killed a big Calhoun County buck after missing it — or so he thought — a few weeks earlier. […]

About Brian Cope 1664 Articles
Brian Cope is the editor of CarolinaSportsman.com. He has won numerous awards for his writing, photography, and videography. He is a retired Air Force combat communications technician, and has a B.A. in English Literature from the University of South Carolina. You can reach him at brianc@sportsmannetwork.com.
Website