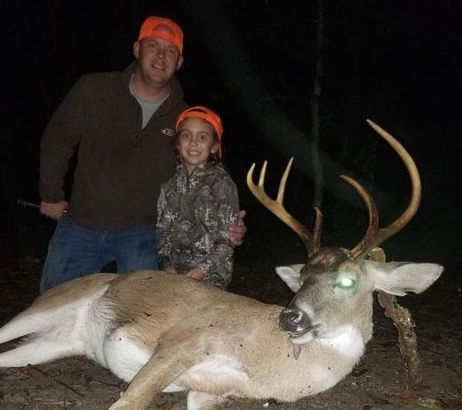 Lainey Sparks of Goldsboro, N.C., a 2020 Dixie Deer Classic winner of the female youth division at the age of 6-years-old, killed another big buck on North Carolina’s last day of the 2020-21 deer hunting season. She shot the 6-point buck with a Savage Axis .243.

The buck was missing an eye and had a unique 4×2 antler rack.

The young huntress was determined to kill and even bigger deer this season than her award-winning one. Her dad stressed it was a tall task, but she was committed to doing whatever it took. And her dad stuck by her side the whole season.

They hunted more than 25 times together, and Lainey passed on numerous bucks that most other hunters would have been happy to harvest. She wanted another trophy, and she was prepared to wait for it before pulling the trigger.

“To say that kid hunted hard is an understatement. We had so many encounters with big mature buck this year, and could never quite get everything to come together. Most of the time I’d walk back to the truck defeated. But Lainey would just smile and skip her way back, just happy she got to see a ‘big one,’” said her dad Travis Sparks.

During the final week of the season, the two hunted from the ground in an area with lots of buck sign. Shortly before dark, a shooter buck appeared. It began feeding 50 yards away, standing broadside of Lainey.

A doe spoils the party

“It was probably a 130-inch, 8-pointer. It was one of the best bucks we had seen all season. Lainey had some technical difficulties with the tripod. So I spun around the tree to help, and a doe that I hadn’t seen, busted me. She blew and ran off with the buck following her,” he said.

Travis was crushed at what happened, and felt he let his daughter down. But she saw it differently, and quickly reminded him what hunting is really all about.

“I took maybe 30 seconds to myself to calm down, as I was steaming mad at what I had just done. When I looked at Lainey, she was grinning like a possum. She whispered ‘that was AWESOME!’” he said.

The young hunter’s dad said that reminded him that it’s not just about killing a big buck, but the experience of being in the woods and the memories being burned into their minds forever.

“At this point in the season, we had spent 25+ hunts together and seen things most hunters dream of. It’s amazing what you can learn from a 7-year-old little girl if you just sit back, listen and watch how they go about life. I’m definitely blessed to have such a smart and grounded daughter that reminds me to find the positives when all I see is a negative,” he said.

And on the last day of the season, it all came together for Lainey and her dad.

Lainey finally gets her reward

“Thirty minutes before dark, we started talking about the season and all the stuff we had seen and all the close calls we had. With about 15 minutes of legal light, I looked up and one of the bucks she’s been hunting stepped out into the field. I was all to pieces nervous. The buck came in just like we drew it up,” he said.

Travis gave Lainey some last minute advice, then sat back and watched. She clicked off the safety and pulled the trigger. They immediately knew she’d made a good shot, and watched as the buck staggered into the woods before crashing.

“I don’t know how many times I high-fived and kissed her head after that. But I know she told me that her hand was sore,” he said.

Some friends came to help recover the buck, which they found after a shot tracking job.

“I was one proud dad watching that girl put her hands on that deer knowing how hard she hunted. She let a lot of deer walk this season waiting on the right one, and it was nice to see her patience and perseverance pay off,” he said.