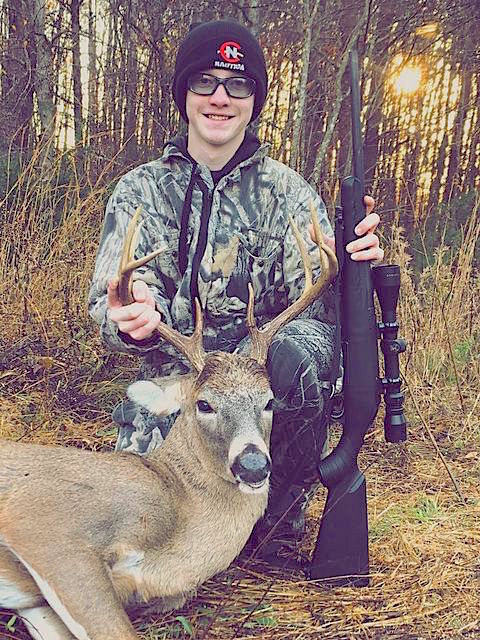 It was the teen hunter’s first kill of any species

My 14-year-old son Carter and I spent nearly every day for three weeks in the Caswell County hunting blind. During that time, we’d only seen one small cow horn. Carter passed on it, waiting for this big guy who had been taunting him on the trail cam.

I kept telling him that we were doing things right, but it was going to require patience. I began to doubt my own plan and question if I should do something different. So I asked him where he wanted to go the next morning. He replied that we had to tough it out by returning to the blind.

When this buck walked out, the amount of excitement that came over me was overwhelming. It’s a good thing Carter had the .243. I talked him through the shot, and what a shot it was, dropped him dead where he stood.

I’m not going to lie, I’ve been hunting for several years, and the emotions that came over me was astounding. This was his first animal he has ever harvested, and he showed great poise and steadfastness well beyond his years.

I am so grateful for these memories and will cherish them for whatever time I left in this world.

Wesley Stewart and his dad with a few squirrels from Lancaster County, S.C.

The NCWRC is hosting a virtual meeting on Jan. 21 to review proposed changes to fish and game regulations. […]

Winter fishing in the Carolinas’ saltwater area can be rewarding. […]